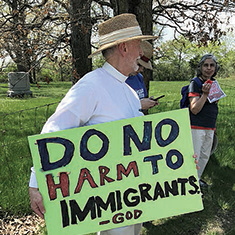 By Sherry A. Wells

“WE TAKE A LOT FOR GRANTED HERE IN FERNDALE.” Rev. Schoenhals observed. “There’s a cocoon of acceptance.” 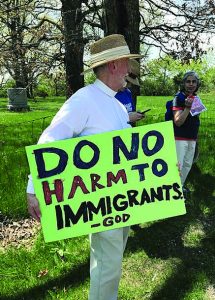 Rev. Schoenhals has been ahead of his denomination in his public statements for LGBTQ persons, but the Church “is coming along and it will get there,” he believes. His stands made for a short stay at one church.

As a Methodist, he is not part of “a nice, comfortable religion.” There is anger, violence, material greed and selfishness to be overcome. The next generation is important to him.

In Ferndale, he was the first pastor of First United Methodist Church to have a large banner on church property declaring Black Lives Matter, made several years ago. Church members and members of the general public signed it. Last year it was placed on the fence. And stolen. A supportive person from the public (not a church member), paid to replace it.

He credits his wife, Jill Allison Warren, with the idea for the next banner: Love is Bigger, which came after the deadly racist confrontation in Charlottesville, Virginia in 2017. Church members and hundreds of the public signed that one, too. Lesson learned: It was installed very high up.

Every sentence about activism begins with “we.” 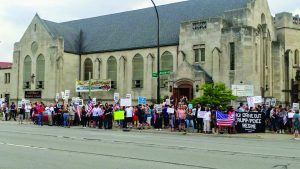 The day after Charlottesville, the church hosted a rally of support. “We had about 400 people in the church that day and another 100 out on the sidewalk.”

“We invite Green Energy, such as during the Green Cruise and bike rides. We have a solar array.”

Activism includes being a sanctuary church for immigration.

“One family was about to move in,” the Reverend said, “but got their papers the day before!”

THE CHURCH RENTS SPACE FOR SEVERAL ORGANIZATIONS’ MEETINGS, including the Indivisible Fighting 9. That group asked permission to place 1000 stuffed and other toys on stakes on the lawn, an art installation to represent the thousands of children separated from their parents. “We gave them our blessing.”

A recent sermon was titled “We Need Heroes.” Rev. Schoenhals described the relationship between the prophet Elijah and Elisha, as hero-to-trainee. The Reverend so pictured the scene that I felt as though I were walking behind the two, listening to every word. Elisha looked up to Elijah’s strong stands against the earthly powers, the political ones.

The Reverend has been accused of being too political but, he insists, and this lesson shows, 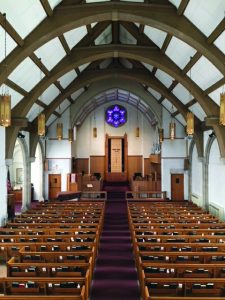 he is simply being biblical.

It was thrice-weekly exposures to the Bible in his youth that led him into further studies and to the ministry. He enjoyed the in-depth Bible appreciation courses in the Liberal Arts program at an evangelical college in Indiana. A Biblical Literature major taught critical thinking and analysis. Greek and Church History and biblical languages and interpretation inspired him.

ASSIGNMENTS BY THE DENOMINATION have included seven years as a campus minister at the University of Michigan; an urban mission in Indianapolis with a small, diverse congregation housed in a gigantic, historic building; a brief stint on the West Coast; and eight years as pastor of a rural church in Armada, Michigan in the early years. Here at Ferndale First the congregation is also remarkably diverse, with about 40 percent Black members: African-American, several from Jamaica, with Ghana represented as well. He will be retiring in 2022, so Ferndale will be his last, although he will help celebrate this church’s 100th anniversary. 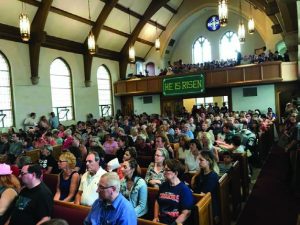 One advantage of the pandemic is that one may secretly attend a service via Zoom. With the link on the church FaceBook page, you’ll see Rev. Schoenhals sitting on the steps up to the chancel for Children’s Time. He looks like a grandpa. When he spoke about his grandson, his face lit up with great delight. I asked his wife if, when there are children with him on those steps, he is much more animated than on Zoom. My suspicions were confirmed with a “You got it right!”