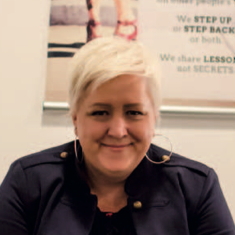 A IS TRUE OF MANY UNIQUE AND NOTABLE START-UPS, THE IDEA FOR SHEHIVE WAS BORN OUT OF BOTH HAPPENSTANCE AND PASSION.

“The idea began with a conversation I had with a classmate in grad school in late 2015,” explained founder, Ursula Adams. “I knew I wanted to create a space for leadership development for women. However, my belief system is that leadership development is equal parts personal and professional. Or, rather, that there is no real difference between who we want to be at work and in the rest of our lives. My vision was that the SheHive would be a space where women could learn all about themselves – a ‘one-stop shop’ for personal development.”

“I started drafting the business plan for the SheHive while I was still in school and still working full-time,” she added. “A few months after graduating with my master’s degree, the desire to bring the SheHive idea to fruition started to get stronger and stronger, just as my full-time job of nearly 16 years was becoming less satisfying due to a management shake-up. I decided to quit my job to pursue the dream and gave myself six months to give it a try before going back to work.”

Encouraged by a mentor, Adams drafted a prototype. “A fancy way of saying I drew it out room-by-room in a $2 sketchbook,” she said. “My mentor suggested piloting a single room for a short period to explore if there was a customer base and a desire for the vision to exist. I decided to run the experiment!”

TAKING THAT NOTEBOOK ALL AROUND TOWN, Adams met with family, friends, and former colleagues, pitching the idea and asking for their input and suggestions.

“Eventually I was introduced to another woman who had a very similar vision and together we decided to pilot the first room together for 100 days. We pulled together a group of women who had expressed interest in the idea and invited them to be our advisory board. Within two months we had drafted the business plan, created a partnership agreement, filed the legal paperwork, designed 100 days of programming, built out our online presence, leased the necessary software, and leased and furnished a small space on Hilton.”

After the first 100 days, Adams’ business partner had to bow out because she was still working full-time and the schedule was too much for her. But before she left, the two women came up with a membership program in which a select group of women would deliver programming and pitch in on some of the administrative work.
“The group is called the KeyHolders and it’s proved to be very successful,” Adams said. The KeyHolders now consists of 19 women. She added, “Most of them earn revenue by hosting programming or running their own small businesses out of the SheHive.”

On SheHive’s first anniversary, the group moved into a new, larger space on Hilton and are currently constructing a podcasting studio. The SheHive podcast, Life on the Other Side of Should, will launch later this year. 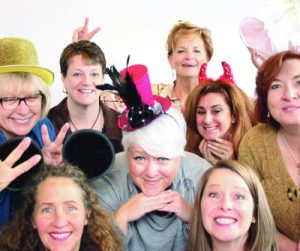 “We also partner with the Build Institute to offer their eight-week Build Basics business planning workshop, and the Women’s Divorce Resource Center to host their workshops for women contemplating divorce,” Adams said.

COMMUNITY IS OFFERED THROUGH SOCIAL EVENTS like game nights, Bestie Speed Dating events (to find friends as opposed to romantic partners), crafting classes, and other fun outings and activities.

According to Adams, the women who come to the SheHive are equally committed to building community and their own personal growth, and the group is adamant about maintaining certain rules that define their culture. These are: We don’t do should, only must; We don’t fix unless we are invited; We are practicing, not perfecting; We don’t yuck on other’s people’s yum; We step up, or step back, or both; We share lessons, not secrets.

“It’s a great place for women interested in becoming more self-empowered by learning from and teaching other women wanting the same,” she said. “Having said that, our doors are open to any adult. Some of our classes are mixed gender. We’ve never said no to a man who reached out and asked if he could attend a class, though we do appreciate it if they ask first.”

Adams said Ferndale is a logical choice for the start-up, because “the business community in Ferndale has been very supportive, and I love our cur-rent space and our landlord. It’s centrally located and easily accessible.”

For more information, check out www.theshehive.com.