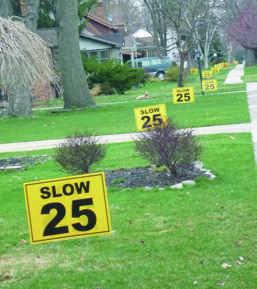 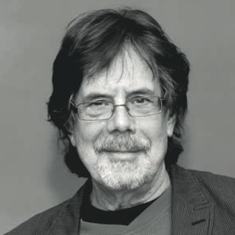 You hear: Can’t we get more patrolling; how about speed bumps, or parking a radar speed trailer showing how fast they’re going? Unfortunately, most traffic calming (as it’s called) has little effect. In fact, it is so expected that drivers will exceed posted limits that fines for violations are figured in as a component of city revenues.

Several of my neighbors and I have “Slow – 25” signs on our lawns, and I try to abide by the limit as an example but it’s hard to keep my Ford Fusion at that speed in a vehicle designed, according to TopSpeed.com, to go 155mph!

Part of the desire for driving faster than legally allowable is obviously to spend less time in our cars and arrive at destinations quickly. According to a study by the Harvard Health Watch, the typical driver will spend almost 38,000 hours behind the wheel during one’s lifetime, traveling 800,000 miles! So, it’s understandable that someone who has sat for eight hours behind a desk or in front of a machine wants to get home fast since there is so little time before having to do it all over again.

Statistically, speeding, say five or ten miles over the limit doesn’t get you anywhere appreciably faster; only a few minutes at best on short in-city trips. However, the compulsion is always to put the pedal to the metal.

SPEED AND RAPID TRAVEL to a destination are deeply rooted in contemporary human culture, perhaps even on our DNA, since the desire to move fast seems universal. Up until the advent of the automobile, other than 19th Century train travel, people couldn’t go faster than a horse would take them.

Fast equals good; slow equals bad became the measure of all things, particularly in production. In response, the early 19th Century English Luddites destroyed machinery, burned factories and attacked their owners. They correctly realized that the looming transition from a human-scale slow society to a fast one dominated by the values of production would create a world over which they had no control. Slow was the human pace; fast, that of the machine.

With the advent of internal combustion powered vehicles in the early 20th Century, an almost delirious fascination with speed swept Western culture. The fastest cars of that era were admired and those driving them became national idols. Races of all sorts dominated sporting news. Without a doubt, speed is intoxicating. A motorcycle riding friend of mine once sported a t-shirt reading, “Faster, faster, until the thrill of speed overcomes the fear of death.”

Speed breathlessly entered art and culture, as well, along with the auto. The 1909 Manifesto of Futurism, issued by a radical art group enthralled with speed, machinery, violence, youth and industry, declared, “We affirm that the beauty of the world has been enriched by a new form of beauty: the beauty of speed.”

Henry Ford’s innovative assembly line is celebrated for allowing the rapid manufacture of Model Ts to meet a swelling demand, reducing production time per car from 12-and-a-half hours to a mere 93 minutes. Until recently, his anti-Semitism and fondness for Hitler was overlooked for his technical advances and his seemingly generous wage in 1914 of $5 a day for his workers. This, at the time, extraordinary wage was less a matter of Ford’s generosity than it was to stop the rapid turnover of his workforce that often quit due to the rate of the assembly line and its monotony.

AS IT TURNED OUT, the bigger paycheck compensated for the tedium, and soon humans acclimated to the demands of the machine and the modern, industrial workforce was created. Ford never wanted to be constrain-ed and sped up production according to sales demands. The idea that workers could have a say in this process through unionization is why Ford fought so long, and often so deadly, against union organizing, becoming the last of the Big Three to accept the United Auto Workers (UAW).

Let’s get back to our hometown streets and speeding cars. The culture of going as fast as you can is being challenged by a movement called Slow Streets, where speed limits are reduced to as low at 20 miles-per-hour in residential areas. Also, road diets such as exist now on Pinecrest, north of W. Nine Mile Rd., reduce the road to two lanes with bike lanes curbside making speeding more difficult. Oak Park is planning the same strategy for Nine Mile Rd. from Scotia to the Ferndale city line.

But there’s been pushback from ordinary citizens who are in a hurry and don’t want to be slowed down. Publicly, the angry voice of Keith Crain, editor of Crain’s Detroit Business, who thinks bike lanes and narrowing roads are bad for business although studies show the opposite, goes on regular rants about the new traffic patterns. His is a misconceived economic argument, but it is also a cultural one. Crain says that we’re being inconvenienced by road configurations that accommodate bicyclists, a very tiny minority of the population, whose usage diminishes even more now that the snow is flying.

Also, something called “Shared Space” – the ultimate plan for traffic calming – is used in some small towns in England which have removed all traffic lights and signs, lanes, crosswalks, and even curbs, allowing cars, bicyclists, and pedestrians to share the same road space.

Although this may seem like a prescription for mayhem, the opposite has been the experience. The potentially lethal road-sharers – the cars – end up driving very slowly and carefully since they know the road isn’t theirs alone. Ready for that? Someone just went roaring down our street at 45 miles-per-hour and blew the stop sign. I wonder how’d they do on a Shared Space? Or, how we cyclists and pedestrians would fare. Transition periods are usually tough.

Peter Werbe is a member of the Fifth Estate magazine’s editorial collective.
www.FifthEstate.org.