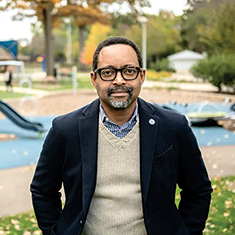 IF BRET SCOTT HAD BEEN TOLD AS A CHILD that his destiny was to become a mayor, he would probably have shrugged it off.

He wasn’t interested in standing at a podium and giving long speeches, nor did he care to sit at a desk and go through stacks of papers. Precocious and energetic, he liked figuring out the mechanical aspect of things. Accordingly, his free time was spent playing with LEGOs, model or miniature cars, and other objects with which he could build something or conduct an experiment.

Scott’s mom typically supported his creative endeavors, but some of his undertakings caused her eyebrows to raise with concern. Despite the passing of so many years, Scott says his mom hasn’t forgotten his nerve-wrecking experiments: “She loves to tell the story of how I would put fuses into light sockets just to see what would happen.”

Naturally, she was relieved when his interests graduated to safer ways of figuring out machines or other electrical devices. While still in elementary school, he became skilled at operating computers. He learned how to write programs on a Commodore VIC-20 and a TI 99/4A, two early home computer systems.

Two of his favorite computer games that he was able to reprogram were Pong and Super Breakout. Around the same time, he built a box and installed it on his family’s TV set to get special viewing services before there was cable. 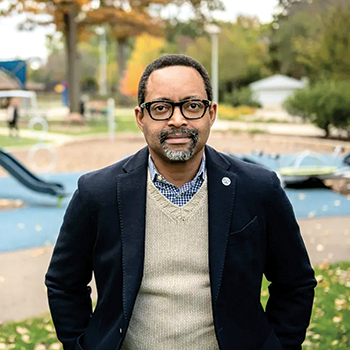 HIS YEARS OF EXPLORING THE WORKINGS OF COMPUTERS and other devices paved the way toward his future career aspirations. As a young adult, he attended GMI (General Motors Institute), and then transferred to Lawrence Tech, where he secured a bachelor’s in electrical engineering and eventually an MBA. His education helped him land jobs at GM, Volkswagen, and Fiat Chrysler Automobiles.

While most of his positions relied heavily on his analytical skills, his appointment at GM to its Diversity Team meant he had to handle issues that were less cut-and-dried. Looking back, he feels pride in what he accomplished while being part of the special group. “The team put a face to some of the concerns that GM’s LGBTQ employees had to deal with,” says Scott. “Like how does a gay couple (traveling for the company) get a room for two when they can’t get married? As Scott wrote and enacted new policies with other team members that increased fairness among the staff, he discovered his achievements benefited him on a personal level: “Chairing GM’s LGBTQ employee resource group helped me feel much more comfortable about being out in my daily life.”

After spending time away from Michigan to live in California and Virginia, Scott returned to Metro Detroit in 2011. He bought a house in Pleasant Ridge, close to Woodward Ave., so that he wouldn’t have to go far to participate in the Dream Cruise and other classic car gatherings. His love for tinkering with and fixing vintage cars was inspired by watching his dad repair collectible vehicles in the shop he once owned. Presently, Scott shares his passion for collectible autos with other enthusiasts through his membership in Lambda, Alpha-Romeo, Lancia, and DeSoto car clubs.

Whether by car or on foot, Scott visits local parks for recreation. It is his enjoyment of them that set the stage for becoming a community activist. In 2013, during an exploration of Gainsboro Park in Pleasant Ridge, he observed that it had fallen into a state of neglect. “The barbecues were in such rough shape that no one would possibly use them for grilling,” recalls Scott, who within days approached the city manager about what could be done to remedy the situation.

While the former city manager was open to discuss it, Scott’s concerns were ultimately not addressed. So, he presented them to members of the Pleasant Ridge Community Council, who recognized he could be a strong advocate for change and encouraged him to run for office as a city commissioner. He ended up winning elections twice, in 2013 and 2017, for seats as a city commissioner. During his consecutive terms, he worked with colleagues to revitalize Gainsboro Park with new play equipment and more eye-pleasing landscaping, along with a new communal fireplace and barbecue pit covered by a pavilion. He also worked with the former city manager to update the city’s Human Rights Ordinance to include sexual orientation and gender identity.

FUELED BY HIS COMMUNITY AND POLITICAL ACCOMPLISHMENTS, Scott then directed his focus toward becoming the Mayor of Pleasant Ridge. In 2021, he ran unopposed and became the first openly gay and the first African American mayor in the town’s history. He quickly went to work tackling local issues for the residents. Because of the pandemic, “people are home more and naturally see more,” says Scott. “Living in a small community means that I’m more available to discuss what’s on their minds.” One pressing concern has been the location of marijuana dispensaries in the area. Scott and the city commissioners have responded to residents’ concerns by clarifying through zoning ordinances that these types of facilities should not be opened near homes or schools.

Another worry for residents has been deciding on appropriate and equitable funding sources for improving the city. One detail that Scott has been working on is helping property owners understand how money for water infrastructure is obtained. Scott says that he and the City Commission “formed a Citizens Advisory Committee to study the topic, and they determined that reasonable infrastructure funding could be guaranteed through a property tax millage rate, a flat ready-to-serve charge, and a charge based on the length of home frontage. This recommendation will go to City Commission vote in June and will fund the city-wide replacement of the 100-year-old water supply system.”

WITH HIS PRESENT FULL-TIME JOB AS VICE PRESIDENT of Partnerships at Wejo, a company that helps businesses and governments benefit from connected vehicle data, and his involvement in numerous car clubs, it is easy to imagine that the added pressures of being a mayor would make Scott regret winning the position. “On the contrary,” says Scott. “I’m just blown away that I a mayor. I would like to thank the Pleasant Ridge community for giving me this opportunity.”

Naturally, Scott experiences stress from time to time from juggling so many obligations. When he doesn’t have free time to unwind in his garage and tinker with classic cars, he finds music to be just as soothing. As proof of this: “I’ve sang more in the shower during the last two years than I have in the past fifty-three.”