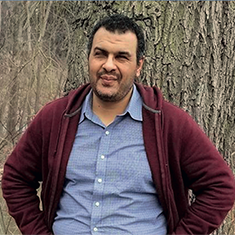 MUHAMMAD AL-SHARKAWI WAS BORN IN EGYPT and received his education there and in Europe, earning both a Ph.D. and MA in Arabic. He later taught in Germany and the Middle East before finally coming to the United States in 2011. He has written six books on the history of Arabic and more than 20 academic articles in several languages. In 2017, he moved to Oak Park in order to teach at Wayne State University in Detroit. 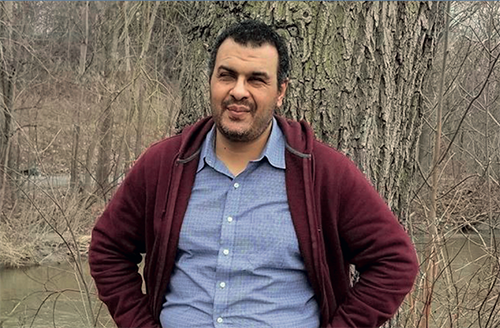 But al-Sharkawi is much more than just an academic and intellectual. First and foremost he is a humanitar- ian. He is also a model citizen. The al-Sharkawi family, for example, is known for opening their home to strangers on Thanksgiving and other occasions. Every day and in every way, Muhammad strives to benefit our community. He is an inspiration in neighborliness.

What drives you to be an exemplary citizen?

My intention is not to achieve the status of an exemplary citizen. When I came to Oak Park, I met great people right from the first minute in my immediate surrounding area and also on the streets that I walk almost daily regardless of the weather. But I found them more as individuals than a community, admirable but individually.

Because my wife and I decided that Oak Park is our final destination after a long tour of the world, we wanted to live in a community. I believe, as a family man, that communities are safer even than a well- policed area in some cases. I started to cultivate roots for my family and to provide a network for my neighbors who are becoming friends really quickly. The goal is for my two boys, my wife’s daughter and the children of my neighbors to grow up in a well- rooted and close-knit but open and diverse community. So the main drive is the future and the joy this process of cultivation brings to me and to Manal, my wife.

What brought you to America and how did you make it your home?

I came to America seeking what money cannot buy: Education in a free and open society for my children. Before coming to the States, my family lived for four years in Egypt, where we had a house, a beach house, a car with a driver and a steady flow of cash.

In 2007, my wife and I started to look for school for my older boy who was kindergarten age. We found out that money can buy us good schooling but not a good education. Being accustomed to traveling, we decided to find a place to raise the family and offer the children a good education. We decided on America although it did not rank in the top ten countries in education. The relative openness of the society and the freedom of expression were attractive factors for me as an author and university professor.

Between 2008 and 2011, my family lived in Providence, Rhode Island where I taught at Brown University. We considered the first contract period an experiment. In these difficult years, my older son began school and started to cultivate his own mind. My wife and I helped him and his younger brother to be aware of the potential of our new life. Once we found out that the children were fine with the new move, we moved to Michigan where I found a permanent professorship.

Why do you invite your neighbors to your home for holidays?

Manal and I come from families that value strong social and familial ties. In our house, we have an open-door policy during the holidays and also on the weekend. In addition to regular and seasonal dinner parties for our immediate neighbors, we found out that many of our neighbors, who come from diverse faith cultures and social backgrounds, spend their holidays alone while others are with their families. We decided to be their family in Oak Park. Manal, my wife, is a great cook and we thought we could take advantage of this skill to attract the neighbors, who were very shy in the beginning.

In addition to book giveaways, the book club, social media presence, monthly get-togethers at the Cork and regular house visits with neighbors, the holiday dinners help form community in Oak Park. Sharing a meal allows people the chance to talk to one another without the awkward feelings that usually accompany talking to strangers.

What are your plans in the future and what are you most proud of?

I have three plans for my community. I am working with some friends and neighbors on a financial cooperative that should provide assistance to the city of Oak Park residents in the form of interest-free small loans. My second goal is to expand my meeting opportunities with the neighbors, instead of once a month to a regular biweekly gathering over coffee. Third, I hope to start volunteering in the city activities and work to improve the life of its citizenry. In short, I plan to leave my city when I die a good place for my wife and children to live in.

As far as Oak Park is concerned, I am so proud I am making a difference. You do not know how happy I feel whenever I exchange greetings with a neighbor.