Home Editions Drone Warfare: Death Delivered From A Location Near You 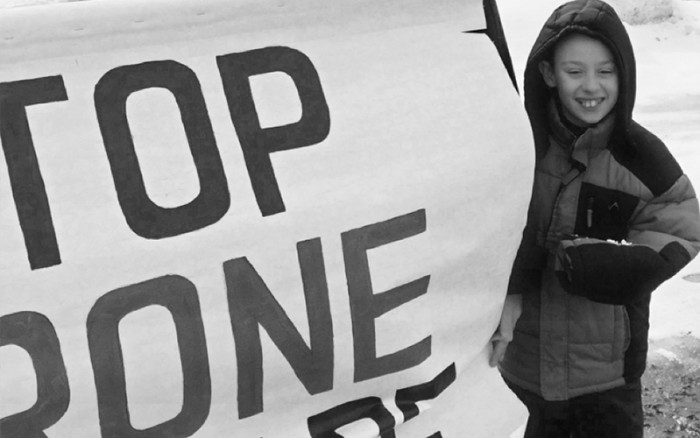 On April 7th, my family and 20 or so other people protested drone warfare in front of the main gate of the Battle Creek Air National Guard base in Michigan. In 2013, the base was named a Reaper Drone Operating Station and should be operational any day, if not already. Weaponized drone operators are dropping bombs from my back yard.

We stood in the mud on the side of the four lane highway from Noon to 1pm. A few of us held signs with slogans like “Stop Drone Warfare,” while others offered conversation to each other or waved at honking cars. One father and fellow protester brought fresh-popped popcorn, which he passed out in little blue bowls to the few children present.

This wasn’t the type of protest that drew the me- dia or police in riot gear. The only law enforcement present was a lone sheriff’s deputy who was on hand to escort us across the highway from the muddy field we parked in to our assigned area. The only pictures taken were by a pink-haired woman who slowed down in the median to snap a few with her camera phone.

“Who said we weren’t going to get any press,” I said as she drove away.

I couldn’t help wondering what point or purpose our protest had. Obviously, we weren’t going to shut the drone program down or change the USG’s policies on drone warfare. I imagined soldiers and airmen trading snide comments at our expense, and commanders deriding us to their troops in formation. It all seemed a little futile and inconsequential. Halfway through the hour, soldiers and airmen started driving onto the base, probably returning from lunch.

Each drive-by was the same. The soldiers would slow down to turn onto the base, avoid eye contact with us and then disappear through the gate.

I thought back to my time in the service and remembered the early days of the Iraq war when I used to watch Fox News and listen to right-wing talk radio. I had consumed media that had saturated me with the belief that the USA was the greatest country in the world and that it was our job to teach the people of the lost and misguided nations how to live. What would I have thought if I had seen an anti-war protest at the entrance to the base?

I didn’t know. I never had to pretend to ignore protesters, because the street sides were always bare when I drove to base. All I ever encountered were waving flags, yellow ribbons and well-wishers who thanked me for my service. It dawned on me that if we weren’t on this corner right now maybe these soldiers and airmen would have the same experience. Instead of smiling protesters and children playing, they would see only a dirty snow bank.

Perhaps, this was the purpose. We were asserting an idea into their world counter to those put forth by their bosses, colleagues and government. Perhaps we were planting a seed of doubt that would one day blossom into curiosity and eventually lead them to reject the precepts of war and embrace peace. Perhaps.

Maybe it’s more realistic to view our gathering from a more modest perspective. The hour our small band spent proclaiming our rejection of what we view as illegal and institutionalized murder is overwhelmingly offset by the entrepreneurs of war toward the side of injustice. Those who support drone warfare flood millions via the US media with a hundred pro-war messages a day for every minute we stood at that gate.

But there we were, humbly banded together, devoting a bit of our precious time to trying to solve a cypher whose key will surely only be revealed by either a true miracle, an epic amount of compounding serendipity or ages of enlightened human evolution.

And yet, my overriding emotions as I accepted the logic of the situation were peace and serenity. I hadn’t come with any delusions anyway. Like many of us, I know firsthand the enormity of the war machine and the mindless momentum of its consumption and destruction.

My thoughts returned back to the scene in front of me. I watched the children throw snowballs and hold signs with their mitten-covered hands. I remembered the stories of the children in the war zones; the ones that live each day of their lives with drones hovering above. I thought about the ones who were in the “wrong place at the wrong time” and were indiscriminately killed by the same drone operators that ignored us as they returned to their war.

The personal belief that drove me to turn my back on the war machine occurred to me again: there is no difference between my family and those killed by drone operators. There are no differences between my son and sixth-grader Mohammed Saleh Qayed Taeiman, who was killed by a drone strike in Yemen earlier this year — the latest of dozens of children murdered in US drone strikes in Yemen since 2002. Nor is there a difference between my community in Pontiac, Michigan and the communi- ties of the people that live with the terror of drones every day. Our children are their children, our voices are their voices and their tragedies are ours.

Or, as President Obama, the Commander in Chief of US drone warfare, succinctly stated: “There is no us and them, only us.”

Luckily, there are no drones that hover in the skies above me today. It’s this accident of geography that allows me to protest safely as my children play in the snow, while our brothers and sisters down- range from the drones can only pray that firebombs are not dropped on them from thousands of miles away by someone behind a computer screen sipping a latte. Since they can’t be here to remind the soldiers – and the rest of us far removed from the war zone – that they are also sentient beings with a right to life, we have to do it for them.

Bio: Brandon Toy is father, husband and active member of the progressive community in the Greater Detroit area. He serves on the Board of Di- rectors of The Michigan Coalition of Human Rights (MCHR.org). In 2013, he publicly resigned his position at General Dynamics Land Systems where he had worked for five years as an engineering project manager on the Stryker Combat Vehicle Program. He is an army veteran who served in Baghdad. bmtoy79@gmail.com. Protests at the Battle Creek Air National Guard base will continue on the first Saturday of every month from Noon – 1PM. Everyone is welcome!

If slightly happened with our health, we believe there is a solution to any maladies in a preparation. What medicines do patients purchase online? Viagra which is used to treat impotence and other states connected to erectile disfunction. Learn more about “sildenafil“. What men talk about “viagra stories“? The most vital aspect you must look for is “sildenafil citrate“. Such problems commonly signal other problems: low libido or erectile disfunction can be the symptom a strong soundness problem such as heart trouble. Causes of sexual malfunction turn on injury to the penis. Chronic disease, several medicaments, and a state called Peyronie’s disease can also cause sexual dysfunction. Even though this medicine is not for use in women, it is not known whether this medication passes into breast milk.