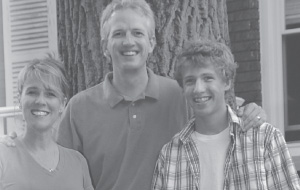 Thomas and Tiffani Gagne have lived in Ferndale for seventeen years, since the last century, almost since the time that one might compare them to Ozzie & Harriet. Don’t remember Ozzie & Harriet? They were a TV family of the 1950s; nice folks, had a house in the ‘burbs and a couple sons. The comparison breaks down there — the Gagnes are actively involved in the community.

For five straight years they’ve attended every city council meeting. Their concerns have included zoning ordinances, school closings, millage proposals, and where the monies in the city budget were going. Tom expressed some of his political views in a blog as well as in local online and print media. Both Gagnes have voiced their opinions, put together and signed petitions, raised funds, and demonstrated about local issues. Tom has run for Mayor of Ferndale and, later, for a council seat. Tif is an elected member of the library board, and acting secre- tary as well as Chair of Development and Funding. They have two boys, shop and dine in town, and pretty up their home on West Woodland Avenue.

“We’re people with kids, and we pay attention to what’s going on,” says Tif. They both feel Ferndale is a great community and they like the diversity, the neighborhoods and downtown. Tif and Tom = mom and pop Ferndale. Tom has been in the software industry for decades. He’s a member of various civic groups in Ferndale and been involved with his kids in the Cub Scouts. Tif worked, since she was eighteen, for a now retired judge in Wayne County. She also used to walk around town tossing Ferndale Friends on porches, later she became the managing editor as well as circulation manager; it helped with the bills and got her more acquainted with the varied neighborhoods in town.

Tom and Tif keep abreast of local matters. Both assert they are politically conservative and both have strong opinions. It adds up to interesting discussions with other residents. Says Tif, “I’ll say, ‘shut up, idiot’ where Tom will study up on issues and use vocabulary where I don’t even know what he’s talking about.” Pose a question to them together, the answer is batted around like a ping pong ball. How is the DDA (Downtown Development Authority) funded,  Photo by Michael Bugard does it come out of the city budget? “No,” says Tom, “they get a certain percentage from TIF.” Says Tif, “That’s not me Tif, that’s TIF as in Tax Incremental Funding.”

“It’s like there will be a tax millage for schools, by state law the DDAs will get a certain share. The DDA can spend it however they want even though you don’t see that mentioned on the ballot,” says Tom. “They get grants too,” says Tif. “Yes, but a lot of them are matching grants,” says Tom.

Tom reads up on issues and contacts people, making a particular point of knowing the whys and wherefores of both sides of a position. It bothers him when people don’t bother to do simple math about fiscal matters; it annoys him that many don’t bother to listen to or read about contrary viewpoints. At a city council meeting (in the mid 2000s) Tom was “so offended by the lack of intelligent discussion, I was inspired to run for office because I couldn’t believe these people were representing me.” Tom ran for mayor in the 2007 race and for a council seat in 2009; he lost both bids for election by just a couple handfuls of votes. Maybe it’s just as well; he thinks the present mayor and council are doing a pretty good job.

Tif is inclined to act from her gut. Tom says, “she has great instincts.” An example: a few years ago there was a bit of furor when handbills were put up at a number of Ferndale stores as part of targeting an issue. One owner didn’t want the handbills in his store and was picketed by an outside group. Tif heard about it, jumped in the car and stood with the owner. “I knew him,” she said. “He was my friend and I shopped there.” Tom looked into the issue and found it specious. “I couldn’t believe that no one official took a stand,” and joined his wife in the counter-protest. Tom likes to express his opinion, take a look at his blog where he enjoys backing up what he often considers a minority viewpoint in a liberal environment. He’s concerned about matters that affect his community, and doesn’t hesitate to give his point of view. “I’ve got the telephone numbers of the mayor and council members,” he says.

Tif loves it in town, her concern is for family and friends. “I go to the dentist and foot doctor here, I shop and eat here. It’s my community,” They’re in town, wearing their opinions and lives on their sleeves. Tif and Tom — mom and pop Ferndale.

If some happened with our health, we believe there is a solution to any maladies in a cure. What medicines do patients purchase online? Viagra which is used to treat impotence and other states coupled to erectile disfunction. Learn more about “sildenafil“. What folk talk about “viagra stories“? The most essential aspect you have to look for is “sildenafil citrate“. Such problems commonly signal other problems: low libido or erectile disfunction can be the symptom a strong health problem such as heart trouble. Causes of sexual dysfunction turn on injury to the penis. Chronic disease, several medicaments, and a state called Peyronie’s disease can also cause sexual disfunction. Even though this medicine is not for use in women, it is not known whether this medication passes into breast milk.