FERNDALE MONARCH PROJECT: This is the Project’s third summer and, according to the experts at Point Pelee, the area just experienced an “egg dump,” which they describe as female monarchs finally finding milkweed plants and dumping many eggs per plant or stand of plants. The previous two summers I found a total of 42 eggs. This July I found maybe 225 in about two weeks, twelve eggs on one small plant alone, all nearby. Numbers seem up everywhere in the region, and I hope that so many people in our area planting hundreds of milkweeds contributed to our own noticeable upswing. Monarchs are easy to raise indoors, and the survival rate is so much higher than outside, it’s worth the small effort. A few dozen members of our group adopted eggs and, as I type this, those eggs, having hatched into caterpillars two weeks or so ago, are now pupating, and will each be a chrysalis over the next ten days to two weeks.

Children at the Ferndale Area District Library watched eggs found right on Library milkweed hatch into caterpillars, and those caterpillars pupate. The timing of the monarch butterflies emerging couldn’t have been better, with story hours on two different mornings ending up the right time to release butterflies into the courtyard. Thirty-nine viable monarch eggs have been found so far this summer in the Library’s butterfly garden (and some eggs that spiders or ants had already partially eaten). A lone black swallowtail caterpillar was found on a library dill plant, and after being in the chrysalis phase for about three weeks, emerged and was released.

How can you tell if a monarch egg is viable? It will look opaquely white, maybe yellowish white. The eggshell may remain stuck to the leaf if a predator like a spider or earwig ate the contents, but it will look smaller, more transparent, and more iridescent. Tiny drops of “milk” that seep from a leaf and harden may fool you at first into thinking you found eggs, but they’re too round, not ridged and pointed like a real egg. By the way, moths spin cocoons; butterflies pupate into chrysalides. The larva of a moth is hidden beneath silk; when you look at a chrysalis, you’re looking at the butter-fly pupa.

Any monarch you see by the time Ferndale Friends arrives at your door is beefing up for a flight (hope-fully) all the way to Mexico. Most of the butterflies you’ve seen this summer lived for four-six weeks, and likely reproduced, but not any you may see from mid-August on. They’ll live for as long as seven or eight months, and need to feed on flower nectar to make a very long, amazing flight. Consider planting some goldenrod and asters. Late-blooming flowers are travel food for monarch butterflies.

While area residents have pitched in and planted milkweed for over two years, the enthusiasm for adopting eggs and caterpillars has been enormous and touching. And while some who adopted have found the individuality of caterpillars surprisingly nerve-wracking (as I experienced myself at first), as many have reported enjoying the process greatly, and seeing it as a more enjoyable way to educate their children than reading them a book on the subject.

BACKYARD HABITAT NEWS: This is a prime year for watching baby birds, with a first for me:watching a male cardinal feed a cowbird fledgling. Cowbirds lay eggs in other birds’ nests, leaving the raising of the chick to the other species. Seems like the usual number is one, but cowbirds have been observed clearing a nest of every egg before laying their own. While the cardinal feeding the begging cowchick had a certain appeal, watching the great-er number of parents feed their true offspring i
is better. We’ve had maybe three nests of chickadees, one of tufted titmice, there are perhaps two families of cardinals exploring right now, young wrens are still out back, having hatched at least a month ago, and neighbors Tom and Evelyn Elster watched Baltimore Orioles raise a family in their unique, pouch-type nest, as well as a family of red-bellied woodpeckers high in a silver maple. Our big trees allow for bigger birds like those. A great blue heron took off from my roof recently, and swooped down the street in its prehistoric way. They find our backyard ponds, but I hadn’t seen any for the last few years. Once one spent winter days in my yard, standing asleep on one leg, that leg barely fitting through the hole made by the electric deicer. If a great blue heron is in your yard and isn’t moving, you may never notice it, they blend in so well. Naturalizing your yard with plants is like setting up a movie screen of nonstop nature viewing.

LINE FIVE: Maybe the time has come to relieve ourselves of a responsibility we accepted in a different era, and hand the problem of getting oil from Canada to Canada back to Canada. While cutting back on America’s massive oil use has to be a prerequisite to the shutdown of pipelines, or stopping new ones, Michigan accepts the risk of the Enbridge Line Five pipeline while not even getting the use of the oil.

The Dakota Access Pipeline, fought so bravely for so long, ends in Illinois. It’s supplying people like us. Line Five is not. And it doesn’t just threaten the Straits of Mackinac. It travels down the Lake Michigan coast in the UP, and it crosses under the Au Sable and St. Clair Rivers, and every river from Mackinaw City to Sarnia, Ontario.

DON’T MAKE ME COME DOWN THERE DEPT: It’s nice to see usable items placed at the street before garbage pickup so we can all help ourselves, but if it’s not gone by pickup time, how about donating it? Our oddly-named landfills (they’re really garbage heaps) are full of usable items and recyclable materials.

Rebecca Hammond lives in Ferndale and loves her folding bike. 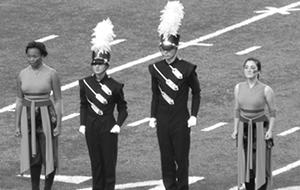