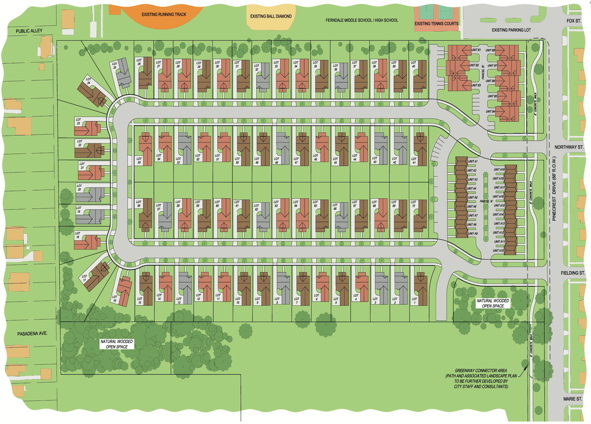 The first phase will include residential homes, while the second is still up in the air. The City has indicated, 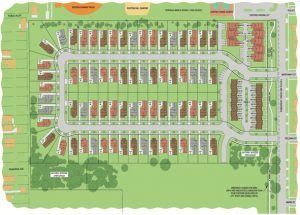 “The remaining acreage of the site, for which a formal proposal has not been developed, is proposed for a mixed-use configuration, generally meaning multiple buildings with an assortment of commercial, residential, and even potentially light industrial uses, mixed with public space and open space.”

This site has been vacant for several years. “The current owners, who purchased the property after demolition on site had occurred, explored possibilities for the site by engaging the Ferndale Public Schools District and current and former city staff, as well as reviewing the city’s Master Plan,” explained Jordan 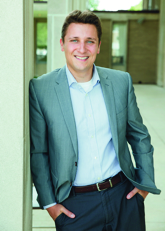 Twardy, City of Ferndale’s Community and Economic Development Director. “While the details of the project are still being finalized in response to community input, the current proposal calls for developing a 20-acre portion of the site which is roughly the portion from the border with Ferndale High School going south almost to Marie Street.”

The community input, which Twardy alluded to, hasn’t been all that positive. One of the primary concerns voiced by residents is the elimination of green space in favor of increasing Ferndale’s population density. According to the Master Plan, “a community-wide survey generated a lot of ideas for strengthening the connection between people and Ferndale’s open spaces, especially diversifying the programs offered through the Recreation Department, focusing on natural landscapes, and increasing the urban tree canopy throughout the city.” In other words, Ferndale residents prefer to preserve the city’s ‘green’ legacy. However, the expansive development would directly counter this goal.

“I got involved in the Pinecrest Holdings Development issue when I was part of a conversation with Councilman Dan Martin who was talking with a citizen during the first meeting of the relaunch of the Ferndale Area Democrats at the Loving Touch in March,” said Dave Cottrill. “In the conversation, I learned about the potential clear-cutting of the forest just south of Ferndale High School for a housing development.”

Cottrill added, “I contacted a friend who lives near the high school. She informed me of some of the issues of soil contamination, tree clear-cutting, moving chemical plume from the Ethyl site, and increased traffic. The amount of traffic speeding through our neighborhoods has been a concern of mine. Also, the Ferndale Rat Patrol is not in favor of new slab construction since rats like to live underneath concrete slabs.” Residents are also concerned about the plan for individual lots to be only 35 feet wide.

Twardy is eager to point out: “As long as the developers continue to pursue a PUD designation for this site, the City will work to ensure that as many trees as possible are preserved. A large determinant of this will be the requirements laid out by MDEQ for site remediation, but we are making accessible green, open space a priority for this project.

He said, “The proposed project calls for 70 single-family homes and 27 multi-family homes, as well as two clusters of publicly-accessible, preserved old-growth trees; and a greenway connector running along Pinecrest from the High School south, all the way to 8 Mile Road. The greenway is located within the privately-owned property but would be provided as a publicly accessible benefit.” Yet, many feel that replacing large trees which have been on the property for hundreds of years with an allotted percentage of smaller ones is not an acceptable solution. 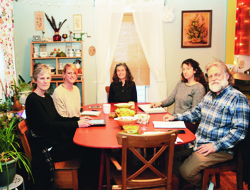 already congested area, and that there won’t be enough school space for families with children, especially since three of Ferndale’s schools were eliminated in recent years in favor of similar developments.

Ferndale resident Al Benchich said he and his neighbors are far less concerned with the specifics of home styles than they are about having homes constructed on this open space. “The present concern of residents is not the style of the homes. It’s that this is the last major piece of vacant property left in Ferndale,” he said.

With regard to the school situation, Twardy said, “The development as currently proposed will enable both new residents to come to the city as well as, potentially, existing residents to have the option of upgrading or downsizing into a newer home, as the project will have different sizes and types of housing available. This could certainly mean additional students for Ferndale Public Schools. [The school system] has told us that they have existing capacity to service the current population of students as well as any new students that come into the schools from this project.”

What is notably missing from the style specifics, however, if they must be discussed, are basements. The homes will sit instead on crawl spaces, and many believe there is a good reason for this. The site, formerly occupied by Hayes Lemmerz, an automotive wheel manufacturer, and chemical supplier Ethyl Corp., is largely contaminated with arsenic, lead, mercury, and other concerning chemicals. It is, therefore, what is commonly referred to as ‘brownfield.’ City policy encourages developers to achieve site plan approval from the Planning Commission before applying for incentives, such as a brownfield tax credit to off-set the rumored one-million-dollar cost of clearing out the contamination. Many wonder if the decision to eliminate basements stems from a fear of digging too deep and uncovering a need for an even pricier clean-up effort.

Residents have expressed the belief that tax incentives associated with drawing new business to the area is a primary driver for the project. Twardy commented: “We believe it will have a positive effect for employers, who view quality-of-life amenities and available housing as critical assets for recruiting and retaining talent to work in their companies. This project will also result in the significant benefit of cleaning up a highly contaminated piece of property, improving the environment for the surrounding neighborhood.”

PINECREST HOLDINGS LLC is pursuing Planned Unit Development approval for the site, and the current Master Plan specifically references the location as one for which approval might be sought. The plan reads, “The Hayes Lemmerz site is envisioned as a comprehensive mixed-use development, and its large size and adjacent uses present the opportunity to offer a range of potential uses, including light industrial, office, commercial, healthcare, recreation, and residential. A rezoning or use of a Planned Unit Development (PUD) may need to occur to accommodate the vision for future development.”

The plan goes on to suggest, “Redevelopment should also be cognizant of the existing site features, including mature tree stands that should be preserved as much as possible. With regard to Ferndale’s sustainability goals, this site should, at minimum, incorporate modern environmental standards for buildings, site design, and infrastructure and demonstrate a balance of densities, urban design features, and mitigation. Of course, sustainable design that goes beyond minimal standards is encouraged.” This has led residents to question what, if anything, is being incorporated into the current plans that would constitute as incorporating sustainability.

“PUD allows for projects that are innovative to go around zoning,” Benchich explained. With this in mind, one might expect green-oriented homes, perhaps with alternative energy resources, or an out-of-the-box development that would focus primarily on improving Ferndale’s community.

“There are these small homes somewhere out west where a whole community was constructed for homeless people, a sort of cottage industry, in which these residents can live and sell things, earn a living. That would be cool,” Benchich said. Why is the developer pursuing PUD approval rather than zoning the development as residential?

The City’s response, according to Twardy: “The entire site currently has two zoning classes; approximately ten

acres of the site is residential, with the remainder industrial. The developers are pursuing Planned Unit Development approval for the site, which allows more flexibility in exchange for demonstrated public benefit. In this case, those benefits include the preservation of old growth trees and public greenway. Under traditional zoning, we cannot require those public benefits (though we do require the planting of new trees). As such, alternatives for the property as it is currently zoned might include ten acres of single-family residential, with the remainder of the site being developed as industrial, and without the ability to require public benefits on the property.”

The City also insists the project improves Ferndale’s overall landscape and increases neighboring home values solely for the fact that the area will be remediated. “Because the site is currently vacant and contaminated, the proposed improvements are likely to significantly improve the value of the project site, whose value affects the value of all the properties surrounding it. The 8 Mile corridor in particular has long suffered from negative perception issues that negatively affected home values near it, and we believe this project will significantly counter that issue,” explained Twardy.

THERE IS TALK, OF COURSE, OF INADEQUATE PARKING, especially with the proposed mixed-use development apparently stalled. Again, the City insists it is soliciting the public’s feedback. “The project as proposed provides the required amount of parking on site, which is adequate for residents and visitors. This requirement will be met even with any changes that are made to the project in response to public feedback,” said Twardy.

However, Benchich and his partner live approximately a quarter mile from the development site and they didn’t notice any apparent attempt to notify the public that meetings regarding the project were underway. “Ferndale is supposed to be a progressive town, one that really values public input. We found out about this by accident. Even the paper that the City puts out had no information,” Benchich said.

Twardy countered, “We have conducted direct mailings and email outreach to residents to disseminate information and will continue to do so. Addition-ally, by April 1, all environmental information we have on the site, as well as relevant contact information for questions, [was] made available on the city website and hard copies in the Ferndale Public Library. We will be posting project documents and updates online – in addition to mailings and emails to residents – at the City web site (click on a green button labeled “Current & Upcoming Projects”). To stay informed, please watch for official mailings and emails, and check the City web site. You can also reach out to Environmental Sustainability Planner Erin Quetell at equetell@ferndalemi.gov with any questions or concerns.”

As this tale unfolds, residents are also questioning whether the site constitutes as historic, given that the foundation of an earlier building left over from the “Ridge Road” days is still present on the land. This adds yet another level of complexity to the already growing list of public comment. Plans are moving forward, however, while the developer and City staff allegedly continue to consider the community’s input. Twardy said, “The major discussion points to date have focused on a need to understand the environmental conditions of the site and how those will be addressed; density, parking and traffic; the future of the southern portion of the site; and the importance of preserving as many old growth trees as possible. Each of these, and other concerns, are being addressed as the plan is modified and finalized in direct response to public input.”