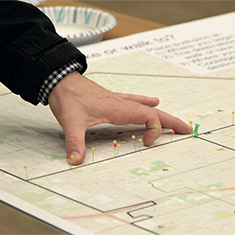 THE CITIES OF OAK PARK, HUNTINGTON WOODS, AND BERKLEY RECENTLY EMBARKED on a joint planning effort to study improvements to the Eleven Mile Road and Coolidge Highway corridors. The main objectives were to study three elements that may be implemented uniformly through the corridors toward creating a cohesive flow between the three communities: Green Infrastructure, Lane Modifications, and Non-Motorized access and connectivity.

The communities applied to the Southeast Michigan Council of Governments (SEMCOG) multi- community planning grant in 2018 and were thrilled to receive funding to conduct this study. The communities hired Spalding DeDecker in the Fall of 2018 through a request-for-proposal process and currently are finalizing the final report. 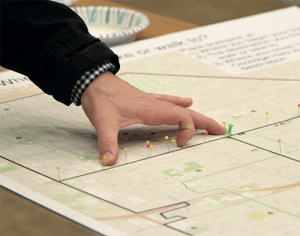 The project began with a traffic analysis, completed by the Transportation Improvement Association (TIA) and then analyzed by Spalding DeDecker. An important aspect of all projects in a community is gathering public comment to ascertain opinions and priorities of residents and business owners. Public- engagement workshops were held within each municipality to obtain input on these potential improvements. At these meetings several concepts were presented. The majority of participants were in favor of many of the design ideas presented in the workshop and the interactive map helped to determine the need for improved crosswalks between communities. Below is a brief list of the findings:

Any opportunity to redirect or slow storm water from entering the sewer system helps alleviate the surge or peak flow which causes the pipe network to flood. Green infrastructure initiatives involve slowing down or redirecting water infiltration and these concepts were well-received by attendees at the workshops.

This evaluation considered different operation or uses of the existing roadway pavement, such as narrowing lanes, eliminating lanes (road diet), adding or removing on-street parking lanes, reduc- ing the pavement footprint (long term), or using paved areas for other purposes, such as bike lanes or gathering spaces. With the exception of Coolidge Highway between Nine Mile Road to Ten Mile Road (I-696), a road diet is feasible in both corridors.

A road diet reduces the number of through lanes to allow other uses within the public right of way which may offer numerous benefits including:

Each community has its own unique planning document that addresses pedestrian or bike routes. This multi-community planning effort sought to improve connectivity between the communities. During the public engagement workshops, participants were asked to map specifically where they cross each corridor, and whether they cross on foot or on bike. With an understanding of those preferred crossing locations, enhancements are recommended where they can serve the most users.

The most popular locations to cross Eleven Mile Road include:

The most popular locations to cross Coolidge Highway include:

Spalding DeDecker has presented recommenda- tions for each different road segment after carefully analyzing all the data and public input. Each community will continue to analyze these corridors and identify potential funding sources to adopt some or all of these recommendations. The final study will be made available on each community’s website.