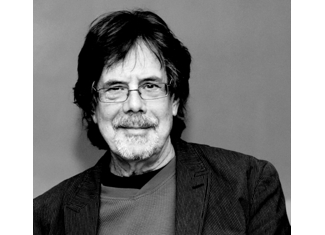 AS THE EARTH TURNS AND THE COLD advances upon us, the humble but ubiquitous t-shirt becomes mostly hidden under warmer clothing except among the most hardy of us. Warding off the chill, it returns to its utilitarian function for men as an undershirt as it was at its origin. Both sexes sport them when the warmth returns, partly as an item of fashion, but often as a canvas on which we express ourselves. We want to show what vacation destination we visited, concert we attended, bands we love, goofy sayings, political slogans, our favorite sports team, and many other categories of how we want to announce ourselves when people come upon us.

T-shirts (from their shape), as we know them today, have a military origin. A little over a hundred years ago, the U.S. Navy began issuing them to be worn under a sailor’s uniform. The term itself became part of the lexicon by the 1920s. The shirts were quickly adopted by men doing industrial and agricultural work as an inexpensive, lightweight, warm-weather garment.

But, then, Marlon Brando gave the shirts a cultural and sartorial boost by wearing one in the 1951 film, A Streetcar Named Desire, while yelling for “Stella!” Brando sported one in the 1953 movie, The Wild One, and James Dean did in 1955’s Rebel Without A Cause. During that decade, a white t-shirt with a pack of Lucky Strike cigarettes rolled up in the sleeve identified it with one of the Big Scares of the 1950s along with communists —the juvenile delinquent!

By the 1960s, t-shirts, along with jeans, were associated with another generation of rebels, this time ones with many causes. Nothing rankled uptight adults more than seeing a long-haired youth sporting a pair of Levis and a t-shirt bearing the legend, “Power to the People” (still a good idea) or a clenched-fist salute.

By the next decade and onto today, t-shirts became an accepted item of apparel that can be worn almost anywhere. It’s not unusual to see a diner so attired in a pricey restaurant where previously a suit jacket was required. In fact, put on one of those atop the shirt and you are considered dressed up!

If you’re anything like me, you have so many t-shirts there isn’t room for them in your drawers and closets. 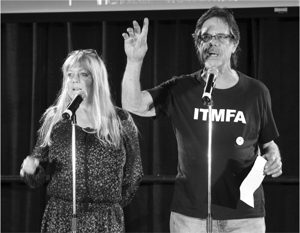 I’ve accumulated a particularly excessive number having worked in radio for years where they were issued to the staff with regularity. Every so often, I take the ones that I figure I’ll never wear again or have gotten a little too snug (ahem!) to the Salvation Army store on 4th Street in Royal Oak.

The Salvation Army defines itself as “a Protestant Christian movement and an international charitable organization structured in a quasi-military fashion,” so I try real hard to focus on their “charitable” aspect. We give our cast-offs to them, figuring we’ll be helping less-fortunate neighbors who work at the store preparing items for sale and provide inexpensive used clothing for people in need.

However, it doesn’t quite work out this way.

The Salvation Army and other charities receive way too many t-shirts and other clothing items, more than they could ever retail. After a very short stay on store racks, much of it is compressed into half-ton cubes and sold to second-hand textile processors where they take on another life as wiping rags and fiber for assorted products. Americans are so overloaded with clothing that if charities didn’t have these recycling firms, they would either have to dump the donations or turn us away.

However, t-shirts are a desired item in Third World countries, so the huge surplus are bundled into 100-pound bales and shipped primarily to Africa, but also around the world. According to a recent New York Times article, in Kenya, the locals refer to them as “the clothes of dead white people.” In Mozambique, they are labeled, often with some accuracy, “clothing of calamity.”

Reaching foreign ports, small jobbers break open the bales, compete for the best items, and sell them on the streets to ever-increasing urban populations. So that’s why you might see a Detroit Tigers or Grateful Dead shirt adorning a pedestrian in Kinshasa or Lima.

This is not to criticize the charities which sell our castoffs this way. These bulk sales provide revenue for their many programs. It’s this or the garbage dump for our discards. Americans have way more clothes than we can ever wear and they have to go somewhere.

Now, several countries in East Africa are trying to put a halt to the importation of secondhand clothing because it impedes their ability to create domestic textile industries. However, if they do this, the Trump administration has threatened to terminate the preferential trade status these countries enjoy under the terms of the Africa Growth and Opportunity Act. The office of the U.S. trade representative says this is to protect American jobs.

If used American clothing is banned from poor countries, those involved in recycling them at numerous levels of sorting, packaging, recycling, shipping, will, in fact, lose their employment. By weight, used clothing is the number-one export from the U.S.!

Wouldn’t it be nice to live in a world where someone, somewhere wasn’t getting screwed?

I’m taking a big bundle of t-shirts to the Salvation Army soon and will watch TV over the next few months to see if it winds up on a demonstrator in the streets of Nairobi or Yangon.