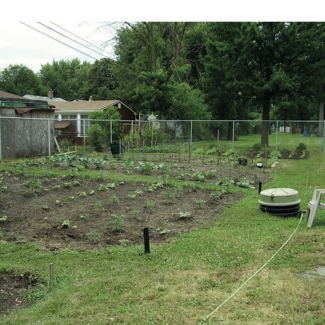 BEAUTIFYING PUBLIC SPACES IS OFTEN THOUGHT OF as the responsibility of the government, but when citizens pitch in it can make all the difference. The Neighborhood Enrichment Committee is the perfect example of this in the things they do for the City of Hazel Park.

Founded in 2004 in collaboration with former Mayor Jan Parisi, the group takes on projects to enhance the appearance and livelihood of Hazel Park. This includes building community gardens throughout the city, hosting fundraising dinners and donating to local organizations.

be. We are part of the community. We are your neighbors and friends, and all of us are doing what we can, with what we have, where we are,” their mission statement (listed on their Face-book page) says.

Probably the most well-known contribution of Neighborhood Enrichment are their many “greenification” efforts. One of their first and biggest projects was adopting Kennedy Park on Merrill St., where they updated playground equipment, in-stalled benches and built a community garden consisting of 17 plots available for residents to grow their own produce. Since 2005, the group has continued to maintain and improve the park.

They have since created a planting team, called the Flower Power Committee, which is responsible for gardening and landscaping public areas. One doesn’t have to look far in Hazel Park to see the impact they’ve made, from making over the corner of John R. and 9 Mile roads by building a display and adding flowers and trees in front of City Hall, to recently collaborating with residents of American House to fill planters outside

the Hazel Park Recreation Center. One mission of the Flower Power committee is bringing the hazelnut bush – Hazel Park’s namesake – back to the city. They’ve plant-ed some in Kennedy Park and celebrate St. Filbert’s Day on August 20th. The filbert is a variation of the hazelnut, and the celebration is derived from the Roman Catholic holiday celebrated in France and England. Typically, the City puts on a memorial race on the holiday.

NEIGHBORHOOD ENRICHMENT ALSO WORKS for the betterment of residents and future leaders of Hazel Park. The group has been funding and installing the “little free libraries” seen around the city, and in June of 2017, they donated two benches with the Hoover PTA to Hoover Elementary for their “Buddy Benches” program. Buddy Benches are a safe space on the playground where more introverted students can sit if they need a friend or playmate. The project hopes to encourage empathy among students.

mented by donations and fundraising. Their largest fundraising event is an annual dinner held in May with raffles and prizes. Typically a spaghetti dinner, the past two years the organization has taken advantage of May 5th falling on a weekend and held a Cinco de Mayo-themed event. The 2018 event was co-catered by Country Boy restaurant and featured a taco bar with sides and desserts.

The group is always accepting donations and looking for new members interested in beautifying and bettering Hazel Park. Meetings are scheduled to be held the first Thursday of each month at the Hazel Park Recreation Center and event details.