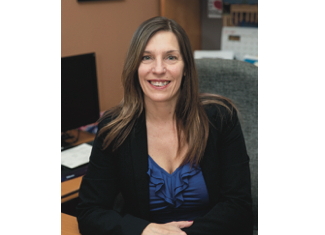 FERNDALE FRIENDS HAS BEEN RUNNING a series of articles regarding “Instant Runoff Voting,” which was adopted in 2004 as the preferred voting method for Ferndale’s mayoral and council races but, for a variety of reasons (legal obstacles, incompatible voting machines, etc.), has never been implemented. However, as of this year Ferndale has new voting machines which are IRV-compatible, sparking renewed interest in the subject.

Instant Runoff Voting allows the voter the option of ranking their choice of candidates 1-2-3. For example, a voter might have marked their 2016 presidential ballot as 1) Trump 2) Johnson 3) Clinton; or 1) Stein 2) 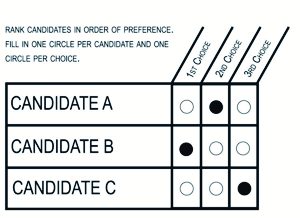 Clinton 3) Johnson, etc. With IRV, no candidate can be elected until they have received at least 50% + 1 vote.
Minneapolis, Minnesota has been using IRV (also known as Ranked-Choice Voting or RCV) for ten years, after adopting it in 2006 – two years after Ferndale. Voter turnout went from 15 per cent in 2005 to 42.5% in 2017. In the most recent elections on Nov. 8, two transgender candidates were elected to city council.

The citizens of Maine voted in 2016 to adopt IRV for the entire state, but the measure has been at least temporarily delayed by the Maine Legislature. Now, volunteers are working to gather 60,000 signatures to put the matter back on the ballot. They reportedly gathered over 30,000 signatures their first day.

MARNE MCGRATH SERVES as our Ferndale City Clerk and, as such, she has an important role to play in terms of the implementation of IRV in Ferndale. The city clerk, along with the city manager and city attorney, make up the Fern-dale Election Commission.

McGrath, a Ferndale resident since 2001, was born in St. Ignace, in the Upper Peninsula. She started as a volunteer in the cable TV department at City Hall in 2001, rising over the years to a position of considerably greater responsibility as City Clerk since 2015.

We asked McGrath what she likes and dislikes about IRV. “I like that IRV/RCV gives the voter the opportunity to truly express their preference of candidates. If one candidate doesn’t win with a majority I think IRV is a great method to determine which candidates are more preferred by voters.”

As for her dislikes, “Since I haven’t had an opportunity to see it in action yet, I don’t have an opinion. Our new voting equipment can only be configured to six vote positions, so I am concerned about how we would manage a ballot with more candidates.”

According to Shane McKibben, of FAIR.Vote, “Minneapolis and Oakland both limit rankings to three candidates, and St. Paul limits rankings to six, so this is not without precedent and should not prove too large a concern.”

One of the obstacles in the way of implementation is the requirement for State-approved ballot instructions. In other words, the Michigan Bureau of Elections must approve the specific language used on the ballots 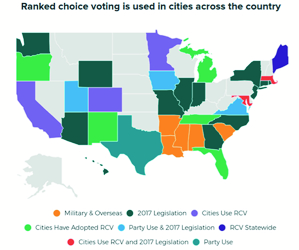 which instruct the voter how to mark their ballot. Recent feedback from the Secretary of State suggests that several changes to current election law are required to move forward. Most recently, ballot instructions have been reviewed by Ruth Johnson’s office and are currently being reviewed by Legislative Services.

However, IRV has already been used in Michigan, in Ann Arbor in 1975, as well as in Kalamazoo in 1918. We asked if Ferndale can follow Ann Arbor’s precedent (up-held in Stephenson vs. Ann Arbor Board of canvassers) and implement without State-approved RCV ballot instructions.

McGrath answered, “Our City Attorney (Dan Christ) has long contended that preferential voting is permitted under the Home Rule City act. I believe this is how Ann Arbor was able to implement it in 1975. Since we work with the County to create our ballots and tabulate our results I’m not sure if there is a way to implement IRV without state-approved ballot instructions. I don’t know how much election administration has changed over the past 40 years, but it could be that at the time Ann Arbor created their own ballots and administered their elections locally, rather than through the county elections division. This may have given them more local control of the ballot structure and voting instructions.

When does McGrath expect we will be able to use IRV in Ferndale’s mayoral and council races?

“It is my hope that we will be able to use IRV in the 2019 local election. It is disappointing to be so close to implementing the wishes of our voters, and yet not be able to do so. At this time, the Commission is unable to approve the equipment because although it has been assured that the equipment is capable, it has not yet been demonstrated. The Election Commission looks for-ward to a demonstration of IRV so it can move forward with the implementation process, whether that be through updated state election law or a determination that the City Attorney’s opinion that IRV is allowed as a preferential form of voting through the Home Rule City Act.”

McGrath has a deep love for Ferndale. “I love working for the community I live in because I feel my efforts 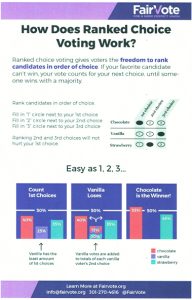 directly impact the quality of life in Ferndale. My background is in customer service, and I believe a customer-oriented mindset is crucial to effective public service. Prior to Ferndale I worked in the hospitality industry. I feel that every work experience has value, but none more so than being our City Clerk. I envision a future where we continue to be innovative, diverse, and always evolving to find the best ways to serve our residents.

“It has been a goal of mine, and every clerk since the ballot measure was approved in 2004, to see the implementation of IRV finally come to Ferndale. It was disheartening to learn that we are unable to do so without a modification to state election law, but I remain optimistic that we will be able to bring IRV to Ferndale by working with our legislators, IRV organizations, and our city attorney.”

If you are interested in working for IRV in Ferndale, contact:
Stephanie loveless at steffie@ferndalefriends.net
Hugh McNichol : 517-420-8452; hugh.mcnichol@gmail.com