Many people have seen high school marching bands in action, but few watching the performance know how much hard work and long practice hours that staff and students put in to reach the state-level competition. “Marching Band at the highest level has become music theater on a football field,” says FHS Marching Band Director Elon J. Jamison. “The kids play, march, dance, sing, act, and so on. It is a monumental physical, mental, and emotional activity.” Jamison has been on staff at FHS for 20 years, serving more than a dozen years as FHS Marching Band Director.

There is quite a process in achieving a slot competing at the state level. Each spring, MCBA member bands are divided into four flights of competition based on school enrollment numbers taken from the second semester school count. The four MCBA competition flight levels range from schools with less than 728 students to greater than 1436 pupils.

Owing to enrollment numbers, FHS was moved into Flight IV competition for a couple of years. Under cur-rent criteria, FHS is again competing as a Flight III school. Langley, who served as volunteer for seven years prior, said “We have placed first in Flight IV the last two seasons and now the stakes are a little higher with our return to Flight III.”

To advance into the MCBA State Championship con-test, bands pay a $150.00 fee and must compete in at

least two of the 20 or more contests that MCBA holds each year. A band must attain scores at MCBA contests placing it among the 12 highest scoring bands in its flight competition. Judging categories are weighted between musical, visual and overall general effect.

Despite the highly competitive nature, participating in marching band brings new awareness to students and fosters cooperation among students. “It really changes your perceptions of what is possible,” Langley said. “The band, staff, and parents literally create a show from nothing. Every single person involved has their sights on one goal – creating the best show possible. It unites people.”

No matter the size of the school, the competitive spirit is strong. “The competition is still quite stiff coming from the west side of the state,” Langley said. “Historically our biggest competitors in the Flight III category are Stevensville Lakeshore and Byron Center.”

ASIDE FROM ACHIEVING HIGH SCORES, music education in general and marching band participation particularly carries many benefits for students.

“Music educates the soul in a way that nothing else can,” Jamison said. “Music and music education teaches and expresses what cannot ever be properly expressed in words or pictures; it has to be heard, seen and felt to properly appreciate it. I often use the analogy that if, as they say, ‘a picture is worth a thousand words,’ a recording or live performance is worth a million.”

Langley adds, “Learning to play as a band teaches teamwork and selflessness. Working on a piece requires focus and determination. The kids learn to lift each other up. Students who participate in ensembles think

more about the whole rather than just them-selves.” Langley went on to say, “This activity is the determining factor of success in many kids’ lives.”

Jamison notes students who participate in marching band also get an intense physical workout. “There has been research done that when marching band kids at this level are in the midst of a performance, all their vital statistics are maxed out: heart rate, lung capacity, mental activity – everything.”

Asked what she wished more people knew about FHS Marching Band, Langley replied, “I wish people knew how much we get done with very little funding, how much we are dependent upon the parent volunteers, and how dedicated the staff is to the students. They don’t get much limelight but are the reason the students are able to compete at the highest level. It isn’t just a bunch of kids marching around a field; it’s about the kids experiencing being a part of something bigger than themselves.”

INTERESTED COMMUNITY MEMBERS CAN HELP THE ARTS at FHS through the non-profit group FAB (Ferndale Fine Arts Boosters) which supports the march-ing band and other programs. “Marching band is a 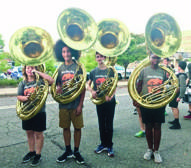 large subcommittee of FAB run by a handful of dedicated parents,” Langley said. “Without them, we would not be able to function at the level we do. They are wizards of finance.

“FAB meets the second Tuesday of every month in the Ferndale High School Media Center at 7:00 P.M. You need not have a student in the schools to be a member; all interested adults who wish to support FAB are welcome. A $5 donation or more helps continue the Fine Arts Program at FHS. Donations are tax deductible. 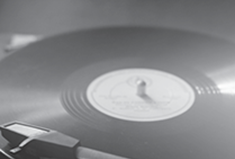