Home Special Many Ways To Make A Difference: Tri-Community Coalition 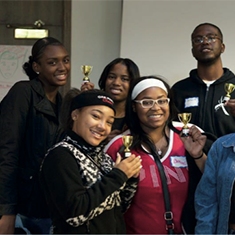 GOOD THINGS TEND TO COME IN THREES, AND THE TRI-COMMUNITY COALITION IS NO EXCEPTION. It’s a nonprofit organization that aims to prevent substance abuse and improve mental health wellness in three cities — Berkley, Oak Park, and Huntington Woods — and its efforts are aimed at youth, adults, and the community at large. (Three again!)

Given the link between stress and risky behavior, it’s not surprising that Judy Rubin, the executive director of the Tri-Community Coalition, thinks it’s important to also focus on mental wellness. “Recently, we’ve found through data that our kids are really stressed,” Judy says, “So we offer mental-health wellness techniques in the hopes that we can prevent kids from possibly going down a substance abuse path.” Part of that assistance includes supporting the Y.O.U. (Young, Optimistic and United) programs at high schools in the Tri-Community area. The groups are student-run and very self-sufficient, but they can turn to the Coalition for guidance and financial support for their activities.

For parents, the Coalition offers Parent Now programs, covering topics like social media, bullying, depression, and how to recognize, avoid, and get out of toxic relationships. These programs are generally held at the Berkley Public Library, and although they’re primarily aimed at parents, anyone is welcome to attend. The Coalition also hosts programs specifically dealing with drugs, such as vaping, underage drinking, and marijuana use. “It’s about keeping parents apprised of what they should be looking out for and how to intervene constructively,” Judy says, adding that unfortunately, underage drinking is a problem with younger and younger kids these days — it’s become common in middle school, and it’s not unheard of even among fifth-graders. (The Coalition has become more active in middle schools as a direct result of this trend.) Vaping is also on the rise.

ONE OF THE TOOLS THE COALITION OFFERS to help parents and kids alike is free drug-testing kits, which Judy sees as a preventative rather than punitive tool. “A lot of times, parents and kids don’t know how to get out of peer-related sticky situations,” she says. “If a child is offered a drug, one way for them to get out of the situation is for the child to say,‘My parents have a drug kit.’ It gives kids an easy out from peer-pressure.” Parents are also given suggestions about how to have open and constructive conversations about drugs, as well as refusal skill tools they can pass on to their kids.

For the past two years, Coalition has hosted a health and wellness fair for the greater community in the spring, and also for the second year they are offering free Narcan-training sessions and nasal spray kits in an effort to address the opioid epidemic. They also support nationwide substance-abuse prevention efforts like National Prescription Drug Take-Back Day, an event that aims to provide a safe, convenient, and responsible means of disposing of prescription drugs while also educating the general public about potential prescription abuse.

This year, the Coalition will be partnering with the Huntington Woods and Berkley Public Safety Departments for National Prescription Drug Take Back Day on Saturday, October 26, from 10 A.M. until 2:00 P.M. During that time, everyone is encouraged to drop off any unused or expired drugs to the Berkley Public Safety Department. (Please no sharps or liquids.) As Benjamin Franklin once said, “An ounce of prevention is worth a pound of cure!”