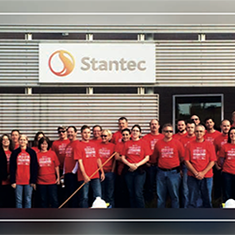 SIXTEEN YEARS AGO, WHEN A LOCAL ARCHITECTURAL DESIGN FIRM was trying to decide where to plant its roots, they chose Berkley for a very practical reason: When all of the employees located their residence with a pushpin stuck into a map of Metro Detroit, Berkley was right smack in the middle.

In 2013, the firm joined Stantec, an international design firm that focuses on the “built environment” and works with projects ranging from architecture to wind power. The Berkley office is now part of a 22,000- employee global company and can count employees who have worked in Mexico, Dubai, Abu Dhabi, China, and Saskatchewa among their own ranks.

“Joining Stantec has meant that we’ve become the go-to office for work within the higher-education sector,” says Patrick Calhoun, one of Stantec’s senior associates. “If any office within the global company has a college or university project, it often comes to us.” In fact, he adds, you’d be hard-pressed to name a college or university in Michigan where Stantec hasn’t done a project. Wayne State? Check. Oakland University? Check. MSU? Check. And in Berkley itself, the firm did the work to renovate and upgrade the infrastructure throughout the entire K-12 school district, including converting the Tyndall Center into the District administrative offices. 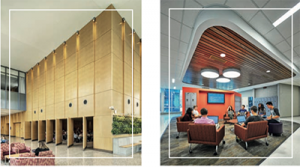 ALONG WITH THEIR FOCUS ON EDUCATIONAL BUILDINGS, Stantec also works closely with municipal structures like libraries and city halls. The vast majority of these projects are renovations rather than building from scratch because so many clients have existing structures that were built to last. While most of those facilities are not registered historical buildings, Stantec does wind up with the occasional steeped- in-history project, like the recent work they did on the University of North Texas Dallas Law School — it’s housed in the old county building that held Lee Harvey Oswald, and parts of the building had to be kept as-is to maintain the historical record.

“What’s neat about these institutional projects — K-12, colleges, universities, municipal buildings — is that they’re buildings for the betterment of the communities they serve, and that has always meant a lot to us since day one,” says Patrick. “As architects and engineers we could do anything, but we choose to do these projects because they’re important and have meaning for society.”

THAT FOCUS ON COMMUNITY DOVETAILS with their quality statement as a company, which includes putting people first. That’s why Stantec hosts an annual Day-in- the-Community and Patrick served on the Board of Directors of the Berkley Area Chamber of Commerce for six years. Stantec was also one of the first businesses in the SOCCRA region to recycle.

For Patrick and his fellow employees, Berkley is an ideal place to be — many employees live within ten minutes of the office, plus Berkley offers a walk-able downtown and boasts various restaurants and shops that employees enjoy frequenting. It’s also not far from downtown Detroit, where Stantec has already worked on higher education projects. “With the resurgence of Detroit and its impact on the entire region, we’re thrilled to be where we are and doing what we’re doing right now,” says Patrick. “We’d like to expand our presence in affordable housing, mixed-use development, and healthcare — we see ourselves as the connector between amazing design experts and what’s needed in this region, whether that’s in Metro Detroit or the city of Detroit.”

By focusing on communities and institutional projects, Patrick says that Stantec’s goal is to create a lasting change in the community… and with the Berkley office being Stantec’s only architecture engineering office in Michigan, they’re well-positioned to do just that.