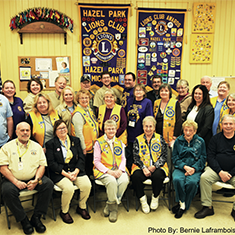 “We take care of our community,” says Mike Dalecke, Hazel Park Lions Club current president. He has been a member since 2005. “Then, we branch out to other communities.” Together, Lions Clubs are a worldwide organization, currently marking 101 years of helping others all around the globe.

Lions Clubs encourage community service, and strive to promote high ethical standards in commerce, industry, professions, public works and private endeavors. The Hazel Park Lions Club has been serving the city since 1947. Perhaps you have encountered a Lions Club member standing at the 9 Mile and John R intersection during “White Cane Week,” held in late April to early May. White Cane Week raises funds to support projects throughout the year to strengthen the community.

“We don’t expect thanks or gratitude,” says Peggy Burleson. “What we get out of it is satisfaction in having helped others.”

Peggy and her husband Larry have been involved with Hazel Park Lions for many years. Larry has been a member for 30 years, and Peggy has been an active member for 15 years. She served as Club Secretary for more than 14 years before leaving the position. Larry designs and builds ramps throughout Lions Club District 11A-2, which covers all of Oakland and Macomb counties. So far, he has built around 90 ramps in Hazel Park and the surrounding areas.

“We’re more than Leader Dogs,” Dalecke noted. Indeed, you will find the Lions Club supporting many community events in Hazel Park throughout the year.

BURLESON MENTIONED THE MANY LOCAL ORGANIZATIONS the Hazel Park Lions work with to help individuals with blindness and visual impairments: Leader Dogs for the Blind, Penrickton Center for the Blind, Beaumont Hospital, Madonna College. Through these organizations, and others, the Lions also help provide a big dose of Christmas cheer, hosting a party at Penrickton Center and adopting a family for the holidays. “Lunch with Santa” at the Hazel Park Recreation Center is another holiday highlight. During the Memorial Day weekend, look for the Lions Club refreshment tent at Hazel Park’s Memorial Day festival. Proceeds from these sales support many community projects.

The Lions are actively involved with events in Hazel Park Schools, such as helping out with the all-night parties for High School students. For the middle school, two students are selected each year for an award from the Lions Club. Other educational projects supported by the Hazel Park Lions have great potential to make lasting change for the future. The Lions Club works with the Promise Zone, which supports college attendance for students living in Hazel Park. Also, each year, the Lions Club presents college scholarships for three graduating students from Hazel Park High School.

The Hazel Park Lions Club meets at 6:00 PM at the Hazel Park Recreation Center on the second and fourth Mondays of each month. “We invite anyone to be part of our club,” Dalecke said.

If you would like to donate to the Hazel Park Lions Club, checks can be mailed to 23109 Harding, Hazel Park MI 48030.