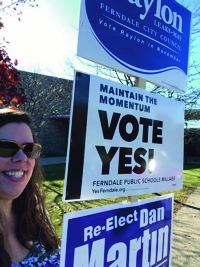 KAT BRUNER JAMES IS THE KIND OF PERSON that turns a neighborhood into a community. Elks Citizen of the Year in 2015, she brings a civic commitment to Ferndale which everyone admires.

She moved to Ferndale in 2002, and joined Citizens for a Fair Ferndale in 2005 and eventually became Chairperson for the group. Her brother Bob Bruner served as City Manager of Ferndale from 2007 to 2011. She married jazz musician Joshua James in 2006, and graduated from the University of Detroit Mercy with a law degree in 2007. Her most recent contribution and gift to Ferndale came last December, when she gave birth to daughter Magnolia Bruner James.

Bruner James was also one of the four core members of the group that put Instant Runoff Voting (IRV) on the ballot here in Ferndale in 2004. “I can’t remember exactly how our little team first began our efforts, but eventually I became the treasurer and volunteer coordinator of our ballot question commit-tee,” she explains. That campaign succeeded, with more than 70 per cent of Ferndale coming out in favor of using Instant Runoff Voting for future mayoral and council races.

Instant Runoff Voting, also known as ranked choice voting, allows the voter to rank their choice of candidates, from first to last. The process ensures that no candidate can be elected with less than 50 per cent support of the voters.

Bruner-James jumped at the idea to reform the traditional voting system in those days. “On the heels of the 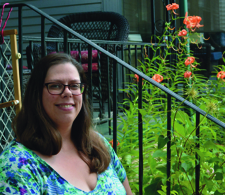 2000 presidential ‘selection’ it was obvious that our electoral system was badly broken in several fundamental ways,” she recalls. “Even though a majority of Americans voted for a more progressive candidate – either Al Gore or Ralph Nader – the rules of our system allowed a conservative candidate to be the plurality winner. IRV emerged as a viable reform that, if enacted, would lead to a more democratic result.”

Despite success at the polls, as you probably know – Ferndale still does not use IRV. Why? For years, the excuse given was that Michigan’s voting machines were not capable of the simple calculations necessary to determine the winner. New machines recently certified by the State of Michigan are IRV-capable. However, now the State and County are presenting new roadblocks.

Following the IRV campaign, Bruner-James focused on priorities which have helped position herself as a community advocate. “I went to law school in the Fall of 2004 and graduated in 2007. Since then, I’ve been a civil rights litigator, primarily representing victims of police misconduct.” However, her feelings regarding IRV have not changed. “Using IRV on a local level is the starting point to seeing IRV – or other major reforms –enacted on a national level,” she says, adding that these efforts are especially needed following the most recent presidential election. “For the second time in my adult life, a third-party candidate is being blamed for ‘spoiling’ a presidential election. And rather than working to make our political system function in a way that reflects the will of the people, progressives are distracted by blaming each other. IRV would reduce the ability for electoral manipulation and result in a true majority winner.”

“However, there are very practical challenges to getting it implemented,” she explains. “The first hurdle is a combination of technology and political will. IRV implementation ideally requires certain software that can properly read and calculate IRV votes, which naturally work a bit differently than your standard vote tally – not to mention, ballots them-selves need to be adjusted.” And, everyone needs to be on the same page to effectively roll out the new system.

Those who manage the voting machines, such as clerks and legislators, will need to be willing to invest in the appropriate software. And, “when implementation becomes imminent, a public education campaign will be critical,” Kat explains. “Having worked with the City Clerk’s office recently on a committee, I believe that they have the energy and the desire to handle this very well when the time comes.”