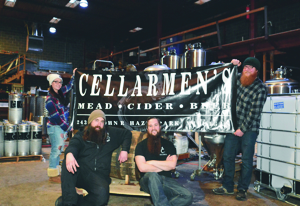 FOR THE LAST 15 YEARS, CITY MANAGER ED KLOBUCHER HAS STUCK TO THE FIVE PRIORITIES he wrote on the whiteboard right outside his office at City Hall. He wrote the list in 2002 after taking office and has not erased them since. They are:

● HAZEL PARK IS NOT FOR SALE.
● HONESTY MATTERS.
● WE EXIST TO SERVE THE RESIDENTS.
● ALL WHINING IS STRICTLY PROHIBITED.
● TREAT EVERYONE FAIRLY.

Klobucher says he tries his hardest to stick to these priorities because they have helped residents through very rough times.

Now, these same values are ushering in a comeback for the City. In 2016, Assistant City Manager Jeffrey Campbell led the charge to commission the Congress for the New Urbanism (CNU) to help guide the City to new planning options for growth and development. According to their web site, the Congress for the New Urbanism “helps create vibrant and walkable cities, towns, and neighborhoods where people have diverse choices for how they live, work, shop, and get around.”

Hazel Park was one of four cities selected to participate. “Basically, we sent a proposal about improving an aspect of planning in the city. We focused on the John R. corridor,” Campbell explains. Two members of CNU came to Hazel Park and worked with Robert Gibbs of Birmingham. “Over three days, people came and talked about what they would like to see on John R., and CNU submitted a report study at the end of it,” Campbell says. More than 120 residents, business owners, and potential business owners attended the meetings. “There was a very diverse group of all ages and all types of people from across the community showed up. People were happy to participate, happy we were undertaking the process, and glad somebody was listening to them,” Klobucher says.

Klobucher came up with five planning criteria for the city:
● A unique destination with two districts;
● A slower and narrower traffic thoroughfare;
● A first-class pedestrian environment;
● A mix of historic and new buildings;
● & a rich mixture of commercial, civic & employment activities.

Klobucher and his team have already begun implementing the suggested plans for the culinary district. Mabel Gray, owned by Chef James Rigato, is a very popular restaurant in Hazel Park, and won the 2017 Detroit Free Press Restaurant of the Year award. Chef Rigato also recently purchased an ice-cream facility in Hazel Park. “He’s going to be rehabbing it and turning it into something similar with his twist on it,” Campbell says.

Another popular stop is Cellarmen’s, a brewery which opened in 2016 and already has over 100 five-star reviews on their Facebook page. Recently, a customer wrote this on Cellarmen’s social media page: “Great vibe here, sampled almost everything, and really enjoyed the session-able meads and the milk stout. Crowlers to go, too! Staff is really cool and overall just a fun place to hang out.” Cellarmen’s plans to expand with a food truck and outdoor seating soon. Another new restaurant is Joe Bar, which will open this Spring.

The culinary district has taken off faster than the retail district. However, Klobucher says implementing this type of planning takes years. “The biggest hindrance I think that we’ve had with retail is, again, just like the restaurants, finding the right building with the right parking and the right area that will accommodate them.” Klobucher explains. The city has hit a few roadblocks in bringing these plans into fruition. “The fact that we don’t own the buildings and we can’t control the interaction between the potential investors and the current property owners is the biggest problem. We have a lot of interest. If we could control that and make it reasonable, then absolutely we would have even more cool things and developments happening here.” Klobucher says.

Expanding the types of retails and eateries offered in Hazel Park does not mean the city is changing its identity. “We’re not trying to be Ferndale. We have our own identity about who we are. We’re a little more blue-collar than Ferndale, maybe a little edgier. But what we really want to make sure people understand is the identity of our town: Who we are and where we’ve been (because) they’ll help dictate what happens in the future,” Campbell says.

Regardless of the ups-and-downs ahead for Hazel Park as it moves into a new phase, Klobucher says, “Hazel Park is a resilient community. We’re innovative and we don’t give up easily.”