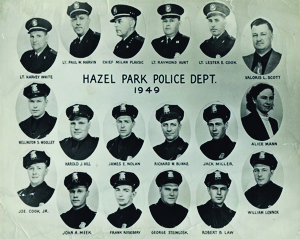 POLICE AND FIRE PROTECTION ARE CRITICAL TO THE SAFETY AND WELL-BEING OF A COMMUNITY. In 1928, Howard Beecher, who later became principal of the high school, marshalled some very strong arguments for Hazel Park to become a city. A few of Beecher’s stated reasons included providing the opportunity for better police and fire services for a growing population. At that time, police and fire services were under the jurisdiction of Royal Oak Township officials.

Beecher wrote that four deputy sheriffs “appointed by the County Sheriff of Pontiac” were headquartered in a police booth located at “the main corner of the district” at John R and 9 Mile. The police booth was paid for and moved to the corner by the local Exchange Club. According to Beecher, these deputies wore their own clothes, until the spring of 1928, when new blue uniforms were purchased.

The four-man force was stretched thin. Beecher wrote, “They are good officers but are subject to calls to other parts of the Township at all times. Sometimes when they are needed badly in Hazel Park, they can’t be found.”

Hazel Park’s proximity to Detroit and nearby Windsor, Canada, where alcohol was still legal, meant challenges for police protection during Prohibition. Beecher’s account pointed out that the community “feels the effect of crime as it exists in the city.” With the start of the Great Depression just a year away and Prohibition peaking, Beecher noted that “Blind pigs and all forms of vice that go with them carry on in various parts. There is an endless number of petty robbery cases and very few of the offenders can be caught.”

Hazel Park’s 25th anniversary guide provided a dramatic account of policing efforts during the 1920s: “During those years it was illegal to make, buy, or sell alcoholic beverages. ‘Bootlegger’ was the name given to those who disobeyed that law.” Sometimes a raid on “an establishment where they knew alcohol was being sold” resulted in gun fights.

The four deputy sheriffs were also responsible for other areas, and were often required in other parts of the Township, thus making a difficult job even more challenging. Beecher wrote, “There are cases that need immediate attention, but by the time they get to the county authorities they put the offenders on probation and allow them to go free. Stolen automobiles are often found harbored in the district.”

Richard Robbins, writing at the time of Hazel Park’s 70th anniversary, noted that the 1930s Township force continued to be “too small” for the size and scope of the area. The Hazel Park Police Department (HPPD) began operating on May 15, 1942 with three police officers. Robbins wrote: “It became their job to attempt to correct the many years of relative lawlessness and vice that had taken hold in the township years.”

21st Century policing remains no less challenging than during the years of alcohol Prohibition and the Great Depression. Via the HPPD website, Hazel Park’s present Chief of Police, Martin P. Barner, says, “It is the goal of the men and women of the Hazel Park Police Department to provide our citizens, business owners, and visitors with exemplary service through professional integrity, unwavering honesty, and uncompromising sacrifice.”

That type of community policing has already provided amazing results. The City’s crime statistics reveal that most of the misdemeanor and felony crimes are at their lowest levels in decades. The recent efforts of the Hazel Park Police Department are making the residents and our businesses more secure, resulting in more home sales, higher home values and more businesses attracted to Hazel Park.

Barner graduated from the Oakland Police Academy in 1993 with a Top Gun Award, and joined HPPD in 1994. He has a wealth of policing experience, having held almost every position within the HPPD.

Barner is upbeat about the future of Hazel Park. His web page post concludes: “Together we can and will make a difference in our neighborhoods and schools. It is by this cooperative effort that we can all make sustainable changes for the betterment of the community.”