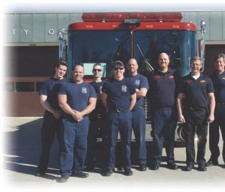 POLICE AND FIRE PROTECTION PROVIDE THE BACKBONE OF CITY SERVICES. In his 1928 argument for incorporation, Howard Beecher blasted the 1920s Township fire services as being “very inadequate.” Lack of adequate fire fighting equipment, and lack of sufficient fire hydrants were two major problems Beecher noted. Also, as with police protection in the 1920s, firefighters were on call to nearby areas. “The Township …maintains one fire engine, chemical fire extinguishers and the Township’s ambulance,” Beecher wrote. “The Fire Department could give better service than it does if there were more hydrants.”

Although Hazel Park formally became a city in 1942, challenges with fire protection did not immediately end. World War II was in full swing, causing shortages of vehicles, manpower and materials. This made it very difficult for the Fire Department to organize. As pointed out in the “History of the City of Hazel Park,” the first fire chief, Sam McCreedy, was not named until August of 1943.

Then, as now, sufficient funding is the crucial factor in providing adequate City services. A “History of City of Hazel Park” noted, “The new City was without operating funds until the summer taxes, due in July.” A special population census was granted by the Federal Census Bureau in order for Hazel Park to garner a share of State Gas and Weight monies.

Jeffrey C. Woodcock, a Hazel Park firefighter and paramedic, writing at the time of the City’s 70th anniversary, reports that soon after the City’s founding, fire services were separated from Royal Oak Township. One new fire engine was purchased as well as one used fire engine. Woodcock notes that the used engine was “a 1920s model…upgraded with parts purchased from the Battle Creek Fire Department.”

Woodcock also noted that Hazel Park did not have an adequate building to use as a fire station, requiring construction of a new building. Woodcook said the Fire Department began service in a partially completed building.

Fire services continued to improve and expand to meet the changing needs of the new city throughout the 1950s. Woodcock noted that in 1953, ten years after the department was organized, the HPFD assumed responsibility for ambulance services, which were previously operated by the Hazel Park Police Department. In 1957, the position of Fire Inspector was created, which, Woodcock reports, “allowed Hazel Park to perform its own fire inspections.” Previously, these duties were handled by the Ferndale Fire Inspector.

The sixties and seventies brought more change to the HPFD. As Woodcock noted, in 1962, the Fire Department joined the International Associate of Firefighters. In 1964, the HPFD moved to the current location at 22830 Russell. During the turbulent summer of 1967, the HPFD assisted the City of Detroit during the riots. In 1972, the first ladder truck was purchased.

Woodcock noted that the HPFD provides “assistance and mutual aid” to surrounding communities. According to the HPFD website, the department is, “man-for-man, one of the busiest departments in the area,” averaging well over 2,700 emergency runs per year. “The statement regarding run volume still holds true,” said Rich Story, present-day HPFD Fire Chief. “Last year, we ran 2,555 medicals and 666 fire calls, for total of 3,221 runs for 2016.”

Chief Story added that his department continues to offer additional services to residents including blood pressure checks, providing smoke detectors and a “file of life.” The file of life contains a resident’s medical information and contact phone numbers.