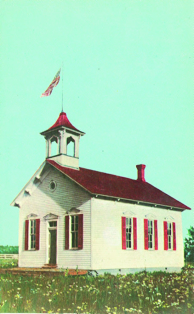 HAZEL PARK LIBRARY HISTORY THROUGH THE YEARS
1912-1936
THE ORIGIN OF LIBRARIES IN HAZEL PARK STARTS with the creation of a library in the one room-school built at the southwest corner of 9 Mile Road and John R on July 8, 1912, by the school board of the School District # 8. The first librarian was the school teacher at that time, Minnie Brooks.
The Board established a fund with the Township for a library, and books were purchased. In 1920, the library was moved to Lacey School, and functioned as a school library only during these years.

1936-1970
IN MAY 1936, the Hazel Park Parent Teacher Association Council invited representatives from all religious, fraternal, business, social and community groups to meet to discuss the establishment of a public library in Hazel Park. Twenty-eight organizations responded. A temporary organization was instituted, with Mr. John E. Erickson appointed as temporary chairman and Mr. William Jewell as temporary secretary. The P.T.A. Council appropriated$227.00 as an initial gift.

A house-to-house canvass for books was organized and, at 1:30 P.M., a colorful parade of school children, dressed in costumes to represent characters in children’s books, was held. During the afternoon and evening a community fair was conducted with Mr. Carl Frostman acting as chairman; the net proceeds from this fair amounted to $403.00.

On November 4, 1936, a permanent library organization was established, a Constitution adopted and officers elected. Each organization involved elect-ed or appointed its own representative. With the $630.00 available from the Parent Teacher Associations, council donation and the Community Fair, books and equipment were purchased, and the library was formally opened on December 12, 1936 in a room loaned by the Board of Education in the basement of the Lacey School. There were 1,617 volumes in the library on the opening day. The library continued to function in the basement of the Lacey School until June 1, 1939, when it was moved to a room on Woodruff Street in the Lofft Building.

In May, 1937, a movement was started for a building as a permanent home of the library. A drive for funds was conducted through the community during the week of June 14, 1937, which netted $892.70. The fund grew steadily with contributions from 20 organizations and many individuals all over the district, until it amounted to $1,939.82.

On November 12, 1937, two lots at the corner of Pearl and Rhodes Streets were purchased at a net cost of $368.89 as a site for a library building. This left a balance of $1,579.93 for building purposes. Besides the material purchased, many private contractors in Hazel Park and Detroit donated material toward the building. All supervision and labor was donated by residents of Hazel Park and friends from neighboring cities. Not one penny was paid out for labor or supervision. The building was erected under the guidance of a building committee consisting of Campbell, Frostman, Erickson, and Mr. Sam Durbin, with Campbell acting as general superintendent. Most of the work was done on Saturdays.

The laying of the corner stone was held on Saturday afternoon, September 28, at 4:00 P.M. For some time, the personnel for the operation of the library was furnished by the Federal Emergency Relief Administration. The library was truly a community project, as more than 1,000 individuals contributed either money or labor toward the building and equipment. Hazel Park pioneered in this field and proved that no community need be without a library.

The total cost of the building was approximately $3,100.00. The official open-ing of the library in the new building was January 6, 1941. It was well-décorated with flowers sent by friends of the library. Tea and cookies were served and about 300 people attended the opening day.

In October, 1960, the Board of Education decided there was just not enough money available to continue supporting the public library, and made a formal request that the City of Hazel Park take over its operation. Eventually, after several failed millage votes, the operation of the Library was taken over on a permanent basis by the City, and City officials set up a regular budget to operate the library, starting July 1, 1961. Through the 1960s the Erickson library continued to serve Hazel Park from its location on Rhodes.

1970-Present
THE CITY OF HAZEL PARK CONSTRUCTED A NEW LIBRARY BUILDING on 9 Mile and John R in 1970, to become known as the Hazel Park Memorial Library. This building was designed by Machida and Associates, who also designed the Hazel Park City Hall and Fire Station. The new library building was built to replace the former Erickson Library, which was overcrowded.

The Library became a victim of City budgetary problems in 1989. Through the efforts of many civic-minded volunteers, a dedicated library millage was passed. This millage guaranteed the library a relatively stable source of funding for operations and services for many years. In November of 2011, the citizens of Hazel Park chose to reaffirm their commitment to the HPML by voting for a supplemental millage to enable the Library to continue to assist the community.

As the years passed, the library took on a greater role, not only as a source for reading material, but as a center of the Hazel Park Community. Services increased and changed with our increasingly technological times. Computers were installed in the 1980s for Library staff, then for the public as the Internet grew and became an indispensable research tool. Movies on tape and music on CDs became available for borrowing in the 1990s, and listening stations were installed in the library for patrons to enjoy the Library’s music collection. WI-FI access was installed in 2010, so patrons could bring their own computers and Internet-connected devices to the Library as well, without waiting for an available computer. We now have 19 computers available for our patrons’ use.

Also, the programs the Library provides the Hazel Park community increased as well. Book clubs, children’s story hours, movie nights, craft programs, Detroit Institute of Arts programs, and many others have been added to provide a rich cultural experience for the Library’s patrons in Hazel Park. In 2012, Hazel Park started offering outreach services to senior citizens in the community, which include a monthly Bingo program as well as monthly visits to the city’s senior-living communities.

Thanks to the continuing support of our tireless volunteers, the City’s elected Library Board, as well as the help and assistance of the Hazel Park Library Friends, the Hazel Park District Library continues to grow and develop its resources to adapt to the needs of its patrons.

Hazel Park hopes to continue the traditions forged over 75 years of service to the Hazel Park community. The Library also relishes the challenge of creating new experiences to further the educational goals and aspirations of our patrons. The Hazel Park Memorial Library strives to accomplish both goals, and we hope that you can join us to experience what the Library has to offer!