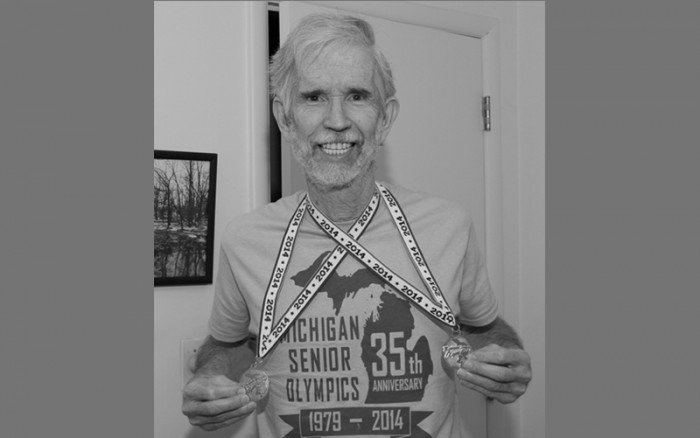 DAN BUTTS IS A MODERN RENAISSANCE MAN. At 74-years-old, he’s got more energy than most 25 year-olds, he’s been published in more journals than most professors, and he’s helped as many people as the Red Cross. He’s in tremendous shape, mostly due to his new-found passion of competitive race walking, and he’s got an Alan Watts- like Zen demeanor, while speaking like a highly intelligent and clinically trained psychologist… because he is.

Butts, a long-time resident of Ferndale (now living nearby in Pleasant Ridge) and a Wayne State University graduate, started race-walking in 2008 due to the rising cost of gasoline. Starting out of pragmatism, he quickly became competitive.

Dan won his first competitive event at the Senior Olympics, the 1,500 meter, at age 69. In 2012, Dan had been with his girlfriend Kathy (who played viola for the Detroit Symphony for 41 years) for 26.2 years, so he walked the Detroit Marathon to commemorate the occasion. Soon after, they tied the knot.

To prepare for his events, he trains with the Pegasus Race Walking Club, which is based in Royal Oak. Dan’s accomplishments include winning 10 age-class metals from 2010 to 2014 (eight gold and two silver.) He’s got a big stair-climbing race downtown at the Renaissance Center, 73 floors from the bottom to the top, on March 1. After he turns 75, he intends to enter the National Senior Olympics. He says ever since he started walking competitively, his quality of life and energy levels have increased dramatically.

When he’s not walking, he’s helping people. Every Monday, Dan can be found volunteering to feed the hungry at a Food Bank at St. John’s Church. In 1984,

Dan founded The Michigan Holistic Health Association, producing a guide and booklet for those like him who were seeking alternative health treatment and ideas.

Dan is also a licensed psychologist. He specializes in men’s issues, identity issues, and helping people find a way to balance work, life, and family. He has a massage table in his study room, and his massage therapist license is hung on his wall along with his many other degrees, race walking accolades, and accomplishments. He grows berries in his backyard, which he mixes with his ice cream.

Not surprisingly, a maverick like Dan doesn’t think too highly of corporations, and is quick to note some of the downfalls of our present state of civilization.

“Pioneers and innovators are held down by politics and money. These are diseases of civilization. These fast-paced, high-tech lifestyles can be exceedingly stressful, and very restrictive. There’s so many opportunities, so many things going on. Know your real priorities, be in the moment. Self-awareness is a key, so that you don’t get pulled into counterproductive activities or patterns.” He said. His book, published in 2002, is entitled How Corporations Hurt Us All.

“Corporate life can be deadly in so many ways, and can compound the wounds that so many people already have. The more dysfunctional people have the control, because their need is greater.”

A socially and environmentally conscious Renaissance man, Dan can truly be an inspiration for all, no matter what your age.

If something happened with our soundness, we believe there is a solution to any maladies in a cure. What medicines do patients purchase online? Viagra which is used to treat impotency and other states connected to erectile dysfunction. Learn more about “sildenafil“. What people talk about “viagra stories“? The most vital aspect you must look for is “sildenafil citrate“. Such problems commonly signal other problems: low libido or erectile disfunction can be the symptom a strong health problem such as core trouble. Causes of sexual dysfunction include injury to the penis. Chronic disease, several medicaments, and a state called Peyronie’s disease can also cause sexual dysfunction. Even though this medicine is not for use in women, it is not known whether this medication passes into breast milk.