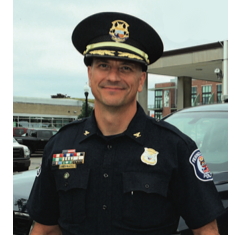 ORIGINALLY FROM MONROE, MICHIGAN AND A 23-YEAR VETERAN OF THE POLICE FORCE, FERNDALE’S NEW CHIEF OF POLICE, VINCENT PALAZZOLO, HAS A LONG RESUME THAT BEGINS WITH AN ENLISTMENT
IN THE ARMY. More recently, after two years as a captain on the Ferndale police force, he was tagged as the interim Chief of Police in May of 2018, and is now installed as the permanent Chief of Police.

The Chief recalls when the housing bubble popped in 2008- 2009 and the Ferndale police force went from 54 officers down to 39. Half of those officers who were cut were bought out and half retired, but the Department still found ii necessary lo lay off five officers.

“In 2010, we lost the number two commander; the person who did the day-to-day nuts and bolts,” Palazzolo says. “So, the chief was doing all the work for two people. Personnel for the Department is 98 percent of their budget. As a department we were doing the minimum to survive; there was no extra training in that time frame because that takes money. Any training that wasn’t mandated by the state wasn’t done.”

“EVERYONE CALLS THE POLICE FOR EVERY PROBLEM,” Palazzolo explains. ”We have had to adapt to the full spectrum of the issues that come our way. We are training officers lo do a very tough job. Expectations are higher on public officials and police especially. Police are very visible today.”

“Now that I was made full-time chief, three positions need to be filled so we can start doing big projects. I need a captain. I have two lieutenants applying for that. A sergeant will be promoted to be a platoon commander. Then I’ve got to promote an officer to sergeant. Then we will have lo recruit to fill that officer’s position. The rest of 2018, we will just be trying lo get up lo full staffing!”

Fully staffed, the force is 41 strong, including the chief. They have six or seven civilians filling records and holding administrative positions. And don’t forget the crossing guards.

The City of Ferndale presents a large number of festivals and public events, such as the art fairs and the Dream Cruise. They pay for officer staffing, so there will be an extra four-to-five officers just assigned to those events. Holidays are quiet, but summer gets busy as downtown now has 23-plus liquor licenses. Three additional officers work Friday and Saturdays to maintain the bar district.

If you want lo know the inner workings of the Ferndale Police Department, residents can join the four-week long Citizen’s Police Academy each October. You learn how the Department works, and officers set up a situation and walk you through an actual mock homicide scene.

After the Academy, Chief Palazzolo wants to start the Chiefs Round Table with the graduates. People who have a little knowledge can help mold the future. They can meet every month or so and brief graduates on events and talk about policy.

PALAZZOLO HAS FIXED HIS ATTENTION on operating his Department efficiently, safely, ethically and morally, and dictated by laws and policies that were put in place for officers to follow.

There will always be random acts of violence. The Chiefs answer to that is, “The idea is to create an omnipresence.”

While they can’t anticipate or prevent everything, active patrolling helps to deter crime. But with the creation of the Internet, through stolen identities people can sit in their horn e and remotely do the crimes they used to do on the streets.

“Crime stats are down because it’s easier and safer for the criminal to do remote crime. Most of the crime we see is crime of opportunity, like breaking into cars, but they only really look for the open doors.”

“We need our public to have confidence in our Police Department and believe that we are ope.rating legally, morally and ethically.”

Chief Palazzolo wants lo let everyone know who they are, and he wants to build relationships with the public. “You don’t have to go on a retreat with someone to build a relationship. Just talking to high school students or chatting with someone on the phone is a connection. We are husbands, wives, and family members, just like anyone.”