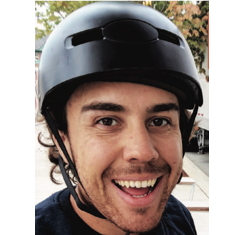 MANY PEOPLE KNOW ANDY DIDOROSI AS THE PERSON WHO FOUNDED THE DETROIT BUS COMPANY, AFTER THE M-1 LIGHT RAIL PROJECT WAS PRONOUNCED DEAD IN 2012. About six months later, the Detroit Bus Company was borne out of a collection of used buses, a lot of spare parts and tinkering.

The Detroit Bus Company is available for tours, rentals, and people can purchase rides for school children and youth programs.

Although he has sparked quite a few small businesses, the Detroit Bus Company was Andy’s first well­ known entrepreneurial venture in Detroit. He has conceived of many dozens since, and executed several of those concepts.

These days you can catch Andy on social media hunting down electric “bird” scooters. His adventures with this technology and the citizens of Detroit led to some interesting revelations. The scooter businesses were not really addressing the population in Detroit that needed the scooters the most. So, he decided to obtain, assemble, charge and deliver at least 100 scooters with helmets lo neighborhood kids in Detroit at no cost to them. You can help. Go to his web site, www.playfreebird.com to find out how lo help with this project.

ANDY’S NEWEST VENTURE IS CALLED POOL. THE NAME DESCRIBES THE SHARING OF RESOURCES, CAPITAL, AND PHYSICAL REAL ESTA TE SPACES FOR THE BENEFIT OF EVERYONE INVOLVED. The particulars of the project can be found at www.hopinthepool.com. He will be launching an experiment in real community development where anybody in Michigan can invest small amounts of money and receive a real return back on their investment throughout the year. When you buy into a project, you own a real share in a house or building and gel your portion of the rent. If they ever decide lo sell the house as a group, investors/shareholders receive a portion of the sale. It’s true wealth-building.

It’s a simple concept that is growing. Traditionally, if you want to invest in real estate, you need lo have the ability to buy a whole house. If you are lucky enough lo have a rich friend or family willing to invest with you, that’s great. Real estate is one of those things that people use to build generational wealth.

For most of us, the realization of wealth through property ownership is impossible or a long shot at best. So, if we can band together and make the projects work in the long term, everyone can benefit. This is radical wealth building. Pool is a way for anyone lo participate in the real estate market; it is a structural system that can result in large return.

This investment is in your own backyard. You can see the house and meet the renters. Unlike a REIT (Real Estate Investment Trust), which is a fund that investors put money into and hope that the fund manager chooses profitable properties, investors in Pool have full control over the direction of the funds they contribute and can choose the real estate in which they want to participate. As part of a REIT, you might own part of a strip mall in Vegas or a coffee shop in Lexington, Kentucky. Pool invests locally only, and you know intimately what your portfolio holdings are. Individuals in Pool only invest in distinct projects.

The first house was purchased by Didorosi and will be renovated by him. This iteration of the process will help him organize the entire enterprise.

‘We haven’t formally launched it yet because we are wailing for approval from the state,” explains Didorosi. They can’t share in financial arrangements or promise any kind of a return because of the rules of security law.

Pool believes investors should be able to see where every dollar goes, so Andy has taken care of that. Investors will get a dashboard where they can see every dollar in and out of the organization.

‘We’re proud of what we’re building and aren’t shy about showing off.”

DIDOROSI CAME UP WITH THE IDEA OF POOL WHEN LOOKING AT PROPERTIES that he was interested in buying. He tried to get buildings and ii was difficult. If you don’t have enough money or a bank or investors to help you secure the property, you have no access to the incredible wealth-building opportunity that is right in your own back yard.

Didorosi believes that the reason this hasn’t been accomplished by anyone up lo this point is because people might be afraid of running up against securities law, which is daunting. He is hoping he can reduce some of that friction and level the playing field so everyone can participate.

The dream is to be able to invest in commercial property and the businesses within it. The businesses within those commercial properties might also have the chance lo become partial owners in that project. As partial owners, they can help make decisions about the property and capture some of the value created, instead of just getting booted out when the owners decide to sell.

There is a lot of interest in the small amount of information that Didorosi has been able to share so far. ‘We are very strictly not soliciting or asking people lo invest yet. I personally know someone who has gotten in trouble with those laws, and it cost him $30,000.”

“I would love to see a large number of people invest into the real estate in their own communities directly. I think that will have a huge number of ripple effects. If people are the investors in the properties around them, ii will ensure that the businesses will thrive.”

He has a point. Investment in one’s own neighborhood is an investment in the outcome of those properties. There is elevation of human capital and social capital that follows in the wake of renovated property and infrastructure that is cared for and maintained. Public parks, schools, recreation centers, businesses, and cultural centers all prosper under the care of local ownership; good neighborhoods attracts good neighbors.

“We are in a crisis of ownership right now.”

Hong Kong owns a lot of property in Detroit. Large investment groups that don’t have any footprint in the city own much of the city.

“Local ownership will change the fabric of the city forever. We, as the people, have to be the next billionaire at the table. We have to make this a choice. We are a system of capitalism, which means that those with the capital get to make all the decisions. Until we assemble capital into an efficient structure that can go out and do the work, we’re not going to have any power in our own communities.”