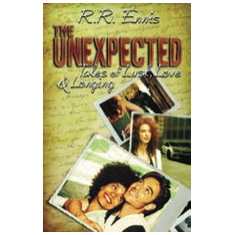 AT AGE 14, RYAN ENNIS, AFTER RECEIVING the 9th-grade Outstanding Achievement in English Award for his essays, began dreaming of one day seeing his writing in print. He spent much of his high school and undergraduate years typing away on his typewriter, then a word processor, and eventually on a laptop, perfecting his craft. It was during his graduate studies that he received success, by winning the Tompkins Fiction Writing Contest at Wayne State University two years in a row for his short stories and seeing his work appear in Ferndale Friends as a regular contributor. Since then, his fiction has appeared in a variety of publications.

Ryan spoke with fellow author and Ferndale Friends contributor David Ryals about his latest book: a collection of short stories about sexual attraction, dating and surprises inside relationships called ‘The Unexpected Tales of Lust, Love & Longing.’

FF: What inspired you to write The Unexpected?
The Unexpected Tales of Lust, Love & Longing is a collection of nineteen tales with themes that have preoccupied me since I began writing stories in my teens: the nature of love; the consequences of acting on impulses; and the need or longing inside of us to be fulfilled.

Perhaps of interest to Metro Detroit readers are the local suburban settings featured in my stories: Ferndale, Livonia, Royal Oak, Garden City, Hazel Park, etc. To appeal to a wide audience, the collection strives for a balance with male and female main characters in overlapping settings and plots.

I enjoy exploring the psychology of my characters. Consequently, I spend time (in the form of detailed prose) getting into my characters’ heads, providing clear motivations for their actions, so that they are relatable.

FF: What was the writing process like? How long did it take?
I once read that Jackie Collins carried a notebook around with her everywhere and would write whenever she had moments free, even if it meant when she was stopped in her car waiting for the traffic light to change. I never attempted that one.

In my early 20s, I read several Victorian novels whose author introductions described how they would take their desks out onto their lawns in the summer and produce flowery prose from sun-up until sun-down. I tried it a few times, but I couldn’t concentrate outdoors — not sure why.

I would say my writing process is to take advantage of my free time when I have it. As a teacher, librarian, homeowner, and dog owner, I maintain a busy schedule. I admit that it is always a challenge to find the time to write. I try to set aside time in the evenings and on weekends to write, even if it means just enough to write a few paragraphs before bed. I try to keep myself in what I call “writing shape”—able to write productively.

FF: How was the reception of its release? How did you and readers feel about the final edition?
I’ve received positive reviews from those who have read ‘The Unexpected’. Many have told me that my book has made them embrace the short story genre. Unlike a novel, a short story can be read rather quickly. With a collection of short stories, the reader can read a few, take a break for a while, and resume reading when time permits. The same typically cannot be said for a novel.