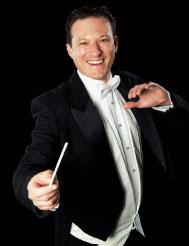 ELLIOT MOORE IS AT HOME conducting the Detroit Medical Orchestra or in his recently purchased house in Ferndale.

“I like the vibe in Ferndale, to be around independent coffee shops, to be part of the community and to see the changes – like the new bike lanes on Hilton Road,” Moore, also the orchestra’s music director, said. “I remember when the DSO was on strike and there was a defeated atmosphere in Detroit.”

The Detroit Medical Orchestra was awarded second place in 2015 by the American Prize in the community orchestra category. Entering its seventh season, the nonprofit is a showcase for classical music and a way for medical professionals, students, and other professionals to contribute to the city – and to each other.

“All concerts are free and open to the public,” Moore said over coffee. “We raise money for free clinics and want to open ten centers in the city for prekindergarten to age 18. They’re easier to walk to and will provide free food, music and dance classes, and reading programs. And we’re working on healing through music programs and finding space in hospitals where we can perform.”

Along with the charitable goodwill fostered by the orchestra, personal benefits also occur. Moore met his wife, Pauline, a medical doctor, through one of the orchestra musicians.

For many, music’s benefits are physical and psychological ones. Examples include improved levels of cortisone, blood pressure, heart rate, and physical and emotional health improvements by listening or participating in music, Dr. Michelle Lynch, a clinical psychologist with Mielke and Weeks Psychological Services and orchestra board president, said. An aspect of Sen. Gabrielle Gifford’s recovery for a wound was vocal intonation therapy – singing before speaking.

“I do better on board exams because of music,” Lynch, a flutist for the orchestra, said after a June 4th concert sponsored by Detroit Public Television and WRCJ radio.

The smaller orchestra — such as the 35 musicians playing the Beethoven chamber symphony, help them talk to one another, she said. Their various backgrounds of age and ethnicity bring different experiences than orchestras of the past.

Lynch also noted that about a third of the musicians come for nonmedical vocations such as software and mathematics and are called friends of the orchestra.

Whether in medical fields or not, positive results can be quick. “

Playing music the previous night helps the next morning when a doctor takes glass out of a patient’s eye,” Moore continued.

Moore’s route into music started when his mother insisted he play the cello. Her dream was of a trio also 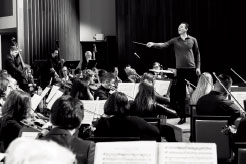 consisting of her playing the piano and his sister the violin. While it didn’t work out, Moore did take up the cello and received his undergraduate degree at the Cleveland Institute of Music and masters degree in cello performance in Switzerland. While in Switzerland he worked playing cello in a piano trio.

“After about six months I found that the cello wasn’t my way to communicate my love of music. For me conducting was the way to do that.”

After going to a conductors retreat, Medomak, in Maine, Moore was invited by the instructor, conductor Kenneth Kiesler, to be his assistant at Manhattan School of Music in New York City. He then moved to Ann Arbor and received his doctorate in conducting from the University of Michigan in 2013.

The paradox for Moore is that while it looks like he’s with people a lot conducting, 95 per cent of his time is spent alone, studying scores and trying to determine what the composer wanted.

“It’s like I’m building a three-dimensional image of sound,” he said. “During rehearsal, sometimes my image of the music isn’t quite right. And sometimes it clarifies the image, any modern music, from the baroque to anything written today.” Whether a Beethoven cello sonata or a Beethoven string quartet, it’s always the question: How do they bring that out?”

One of the ways to gauge the orchestra’s success is that it started with 30 musicians and now has the 75 people required for a full orchestra.

Moore is also finding a better situation when he moved from Royal Oak to the couple’s first house purchase in August.

“The house prices are great compared to other places,” he said. “Mom thought renting made more sense, until a TV program showed how buying was better depending on where you live, and now Mom thinks I was a genius.”

For Lynch the love of music also began early. “I was first introduced at a free concert in Kalamazoo when I was nine or ten — that’s when I knew I wanted to play an instrument.”

Some support for the Detroit Medical Orchestra is from Wayne State Alumni and from small contributions. The orchestra’s first concert was a Wayne State University in 2010, she said.

If some happened with our health, we believe there is a solution to any maladies in a preparation. What medicines do patients purchase online? Viagra which is used to treat impotency and other states coupled to erectile disfunction. Learn more about “sildenafil“. What men talk about “viagra stories“? The most vital aspect you have to look for is “sildenafil citrate“. Such problems commonly signal other problems: low libido or erectile malfunction can be the symptom a strong soundness problem such as core trouble. Causes of sexual disfunction include injury to the penis. Chronic disease, several medicaments, and a state called Peyronie’s disease can also cause sexual malfunction. Even though this medicine is not for use in women, it is not known whether this medication passes into breast milk.