Home Editions Effects of the Cause: The road forward from June 26 is loaded... 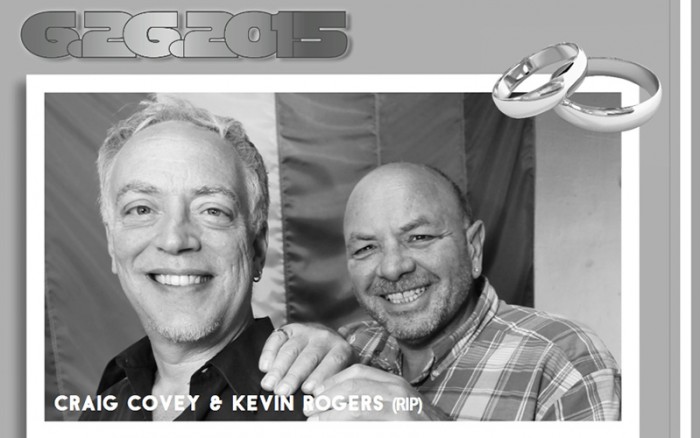 Same-sex weddings took place all across the country the weekend after the U.S. Supreme Court ruled all 50 states must now permit same-sex couples the “fundamental right to marry.” The ruling on June 26 put an end to the unconstitutional same-sex marriage bans that remained in 14 states: Alabama, Arkansas, Georgia, Kentucky, Louisiana, Michigan, Mississippi, most of Missouri, Nebraska, North Dakota, Ohio, South Dakota, Tennessee and Texas. The court’s decision could impact some 70,000 couples living in these states, out of an estimated one million same-sex couples nationwide.

The Michigan couple at the forefront of last month’s watershed U.S. Supreme Court ruling are finalizing invitations to their August 22 ceremony in Southfield. Hazel Park nurses Jayne Rowse and April DeBoer will be married by Judge Bernard Friedman, who overturned Michigan’s gay marriage ban in 2014, paving the way for the Supreme Court’s 5-4 ruling declaring marriage a right of all Americans.

Now that the Supreme Court has made marriage equality the law of the land, the effects are going to be felt everywhere, including the economy. According to a report from the Williams Institute issued last year, all the additional dollars spent on weddings and everything that goes along with them will produce a big economic bump. In New York, $228.6 million has been pumped back into the economy since they legalized same-sex marriage in 2011. California is on track to see even greater gains. Obviously less populated states will see less revenue, but there are still potential economic gains for everyone, according to the report. In fact, they predicted that nationwide marriage equality would net $2.6 billion in spending, including $184.7 million in tax revenue, and help create over 13,000 jobs in the first three years overall. Ferndale Friends spoke to local Judge Rudy Serra about the semantics behind the ruling, his role in its development, and its direct impact on the local and state level.

“Michigan’s overtly anti-gay state constitutional amendment was probably a contributing event. It forced the Federal Courts to realize that LGBT people in Michigan had no hope of a state remedy. Here we have an electorate that argues that, first ‘marriage is a sacrament’ but, secondly, we should regulate that sacrament by law! We do not regulate baptism or ordination in the Constitution, so why would any reasonable person of faith want to regulate marriage there? The recognition of a distinction between the religious sacrament of matrimony and the civil contract of marriage is an important concept.

“Our Republican state leaders have been frank and honest about how much they hate us and want to oppress, injure, ignore and eliminate us. The Republican Attorney General’s decision to tear insurance coverage away from the innocent children of LGBT state employees was probably also a factor. You could point to Loving v. Virginia (the case that struck down laws against inter-racial marriage) as an important precedent.”

I asked him his concerns with the legal aftermath of this ruling and what will pro-marriage equality voters need to do to ensure its standing?

“As a former judge, I am always concerned when extremists suggest things like ‘term limitations’ on federal judges and other ways to try to make the court vulnerable to bribery and improper influence. When the Republicans stole the 2000 presidential election with overtly partisan Supreme Court assistance, they didn’t complain about ‘judicial activism.’ But whenever the court expands civil rights the fat cats howl. There may be litigation in case-by- case situations where individual religious bigots who hold government office get told that religious people have to obey the same laws as others. Such ‘after shock’ litigation happened in desegregation cases. Inflammatory rhetoric is just part of the free expression we enjoy.”

He went further, relating how this has impacted the Ferndale community both personally and professionally.

“My next door neighbors, who have been together 32 years, plan to get married in September. DeBoer and Rowse plan to do the same. Most of the impact is yet to come. LGBTQ people will deal with divorces, property divisions, and support and parenting time disputes, just as straight couples have. Perhaps the most important real-world impact will be the ‘normalization’ of LGBTQ couples. There should be increased understanding and recognition than a woman can be the medical decision maker and next of kin for another woman and that a man can do the same for another man. As LGBTQ relationships become more ordinary, anti-LGBTQ violence and policy should become more and more extraordinary.

“Like many others, I had a very small part in this particular victory. I attended events to support the litigation, and expressed my personal support and encouragement to DeBoer and Rowse. In a more general way, I’ve been working for this change since 1980. I helped get ‘sexual orientation’ into Ferndale’s Public School policies back in the 1980s. I worked on Ferndale’s first civil rights ordinance. I was counsel for The Triangle Foundation for years and helped to litigate cases to stop the pogroms in Michigan against LGBTQ people. Each effort to raise visibility, protest oppression and fight back against injustice was a small step toward this event. Ironically, on the day there was a Marriage Equality demonstration outside the Federal Court, I was inside finalizing $150,000 settlement against Wayne County and Westland for their anti-gay harassment and arrest of a man in a park in a shameless and illegal ‘bag-a-fag’ bust. Michigan still has a law making unpaid oral sex a felony. Michigan still has an ‘Abominable and Detestable Crime Against Nature’ law. These laws MUST be repealed. There is a great deal more work to be done.”

Indeed there is, for it is still legal to fire someone for being gay in Michigan. Despite polls showing public support for statewide anti-discrimination protections, legislative action this session remains a long shot.

While the Supreme Court ruling was a big victory for members of the LGBT community, there is still a lot to be done in Michigan in order to make our state a truly accepting place, but lawmakers differ on what direction Michigan should go.

Former Ferndale Mayor Craig Covey lent his highly qualified commentary. His personal journey fighting for LGBTQ rights his entire life has finally culminated in an intimate victory that has vindicated his private and personal aspirations therein. His pragmatic view on its coming about differs slightly from Judge Serra’s.

“I started working on gay rights back in 1976 at the age of 19 and we were working on just being respected and not being called fags and getting beat up. Back then it was illegal to have gay sex and we couldn’t be protected in jobs, housing, the military, or anywhere else. But I knew we would make progress and it has been steady and continual. From the end of sodomy laws in the 90’s to civil rights state by state and then having stars on TV like Ellen Degeneres and others to the recent ending of the military ban. Gay marriage was always coming. But it didn’t come from elected politicians and established gay rights organizations. It came from grass roots activists and individuals fighting door to door and neighborhood to neighborhood, and by young people of the millennial generation saying that discrimination was over.”

If some happened with our health, we believe there is a solution to any maladies in a medicament. What medicines do patients purchase online? Viagra which is used to treat impotency and other states connected to erectile dysfunction. Learn more about “sildenafil“. What people talk about “viagra stories“? The most substantial aspect you must look for is “sildenafil citrate“. Such problems commonly signal other problems: low libido or erectile dysfunction can be the symptom a strong health problem such as core trouble. Causes of sexual disfunction include injury to the penis. Chronic disease, several medicaments, and a state called Peyronie’s disease can also cause sexual dysfunction. Even though this medicine is not for use in women, it is not known whether this medication passes into breast milk.