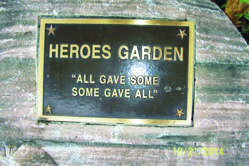 RECENTLY, I WALKED THROUGH THE HEROES MEMORIAL GARDEN IN FERNDALE’S GEARY PARK WITH GORDON MATSON. Matson is a native Ferndalian, a newlywed and mascot of Ferndale Pride. Getting to know him was a bonus! He met up with me to explain a little bit of the history attached to the recently-refurbished garden.

Matson was a neighbor of the Mahan family, who lived across from the site of the garden. It wasn’t a garden then. There were actually two houses standing where the garden is now. Once the park was established, Joe and Barbara Mahan began gardening a small area. They’d bring out their wagon and garden tools, and little by little they developed what is now the Heroes Memorial Garden. They established it as a memorial garden in 2001, after 9/11.

When the Mahans passed away about four years ago, Matson promised their daughter Tracy he’d take responsibility for the upkeep of the garden – a tough project. When neighbor Carol Jackson got acquainted 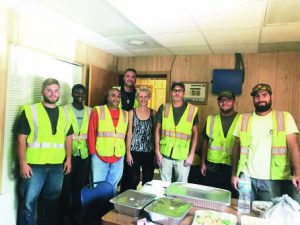 with the garden, she saw its potential and was sad to see it had fallen into disarray. She and Gordon reached out to the community. There were volunteers but more help was needed, so Jackson took it to the City Council. Once she connected to the Council’s Dan Martin she knew help was on the way, but the real moment of joy came when Carlos Kennedy of the Department of Public Works called to tell her they’d designated 10 workers to the project. One of the DPW team lived in the neighborhood and had seen her working in the garden, and mentioned to his co-workers that there was “a lady out there pulling weeds.” They were happy to help.

Along with DPW Director Kennedy, the team consists of supervisor Rocky Cooper, Ty Lewis, Zack Hreha, Charles Taube, Derek Radell, Carl Cartel, Jose Ramirez, Holly Hindley and Drake Hreha. Jackson was amazed by their great work. “They put so much thought into everything. Repurposed whatever they found” And she was grateful. “I thank you and my back thanks you”. When the first part of the job was finished, a delicious catered lunch from Christine’s Cuisine was delivered to the team.

The DPW will continue to do a large part of the planting and cleanup necessary to maintain the heroes Memorial Garden. There will be more benches, footpaths, and the small butterfly garden that exists near the street will be moved to the center of the garden and expanded. Next Memorial Day there will be a picnic to 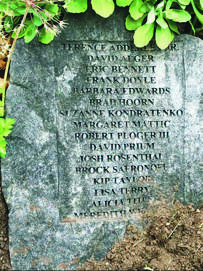 celebrate the work and remember the heroes honored by the words ”All Gave Some, Some Gave All.”

Matson and Jackson are relieved and delighted. Matson: “I want to keep it (the garden) going for Joe and Barbara and the Mahan family” Adds Jackson “The DPW worked so damn hard. The story is about them and the wonderful, collaborative city we live in.” We can still pitch in to help keep the Heroes Memorial Garden the serene and beautiful place it is today. Every little bit helps. Matson “If you walk by and see a weed, pull it up”. As Mother Teresa said, “Not all of us can do great things, but we can do small things with great love.” Look at what Joe and Barbara Mahan started with a wagon and a few garden tools.

Check out the Heroes Memorial Garden on Facebook, or in person, in the Northwest corner of Geary Park in Ferndale.