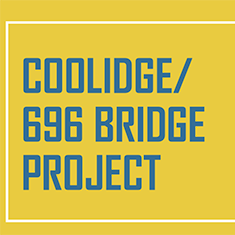 THIS SPRING, THE CITY OF OAK PARK ANNOUNCED that it is moving forward with a concept to maintain and beautify the fencing on the overpass bridge on Coolidge Highway over I-696. The bridge fencing currently is old, mundane, and slightly dilapidated, like most overpass bridges in Michigan. This provides a less-than-stellar image on behalf of Oak Park to the thousands of motorists passing under this bridge every day.

Soon, though, that fencing will become the latest public infrastructure improvement in the City, helping Oak 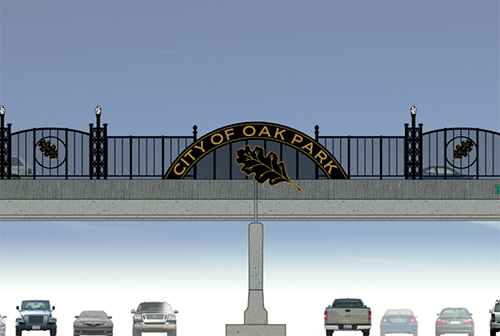 Park with branding, beautification, and its image. When completed, this overpass bridge will be similar to the one in Auburn Hills on University Drive over I-75, if you can picture it.

The project previously faced a funding hurdle, as construction costs continue to rise at a record pace due to labor shortages and federal steel tariffs. These issues caused City officials to take a second look at the plans. They were starting to wonder if it would be worth it to move forward with this project at all. Luckily, though, at the City Council Meeting on March 18, the project overcame its obstacles as City Council voted to fully fund the project and award a bid for construction to Z Contractors Inc. of Shelby Township.

THE ORIGINS OF THIS PROJECT BEGAN in September 2017 and stemmed from a necessity to fix parts of the bridge’s fencing that had become broken and potentially dangerous. It then grew into a desire by City officials to take this opportunity as one to brand and beautify the City via the improvement of public infrastructure. Throughout the unfolding of this concept, it became lumped in with other public infrastructure improvement projects the City has undertaken lately, such as the repainting of the water tower on Eleven Mile Road and the Nine Mile Redesign. The City prides itself on its proactive efforts to improve and modernize the infrastructure we see and use every day. 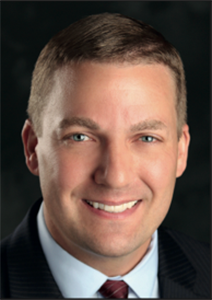 “Branding is important for our community in terms of attracting new residents and businesses. Taking advantage of this opportunity to create a distinct impression by marketing ourselves to the thousands of motorists who use I-696 every day to commute through Oak Park is a good business move,” said City Manager Erik Tungate. “Cities that take on these kinds of quality of life improvements are cities that are typically thriving. It is no longer enough to rest on our laurels. We have to seize every chance we can to establish ourselves as a unique place to live and work.”

The project will cost approximately $628,000, with the vast majority being funded by the City’s Major Streets Fund. The project is broken down into two phases. The first phase is the fabrication of the metal design, which is expected to take about two months. Shortly thereafter, the second phase will begin, which is the construction phase to affix the fabricated metal design onto the overpass bridge, expected to begin mid-summer.

MOTORISTS CAN EXPECT MINOR LANE CLOSURES DURING THE WORK to affix the metal fabrication to the bridge, potentially on both Coolidge Highway and I-696. All lane closures will be communicated out by the City.

“Now, when travelers pass under Coolidge on I-696, what they see is barren-looking cyclone fencing. Soon this entryway to the City of Oak Park will look inviting with an attractive new fencing design and lights,” said Mayor Marian McClellan.

If all goes as planned, the project is anticipated to wrap up in the Fall.

Note: Due to some confusion, it is important to note that this is an entirely separate overpass bridge than the one with Victoria Park on it that the Michigan Department of Transportation (MDOT) will be replacing in 2024 due to leaks. ■ 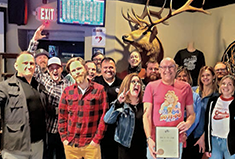