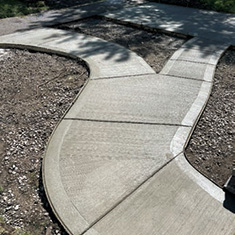 WHEN MICHIGAN-NATIVE MADONNA SANG ABOUT LIVING IN A MATERIAL WORLD, she could have just as easily been singing about living in a concrete world. 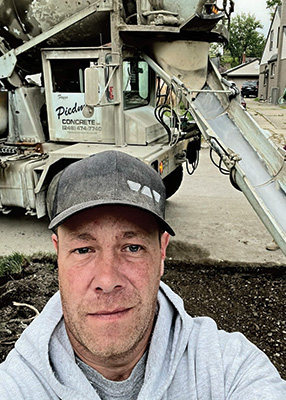 It’s also affordable and surprisingly reusable – Aaron points out that when his crew rips out driveways, they take the concrete to a cement-crusher where it’s crushed back into aggregate that’s used again. (Quick vocab lesson: although people tend to use “cement” and “concrete” interchangeably, cement is an ingredient of concrete. Cement plus aggregate plus water equals concrete.)

AARON HAS BEEN WORKING WITH CEMENT AND TILE EVER SINCE HE APPRENTICED to a tile expert at the tender age of 17. Even though he attended college and eventually emerged with an MBA (which came after majoring in music), he decided to pursue a hands-on career instead. Not only does it feel good to do physical labor, he says, it’s rewarding to see the finished projects. Initially, he focused more on redoing kitchens and bathrooms – he has another company called the TileLab – but when Covid-19 hit, outdoor work got a lot more appealing and he started laying more patios and driveways.

Another in-demand concrete job is fixing porches. “I’d need three or four lifetimes to get to all the porches that need repair in Ferndale,” Aaron admits. Part of why porches are a perennial problem for many residents in the area is because houses in Oak Park, Pleasant Ridge, and the east side of Ferndale were often built with root cellars that extend beyond the basement and underneath the porch. When that’s the case, extra skill is needed during a repair/rebuild to prevent the underside of the porch from caving into the basement proper.

Along with having the engineering savvy needed for handling finicky jobs, Aaron prides himself on having enough skilled workers on his crews to lay driveways in a single day. “We don’t leave you with a torn-out driveway that you can’t park on for a week. We come with enough manpower to do it in one day flat. Our crew of eight or nine guys shows up at 8:00 A.M. to tear out the old driveway, and then we’re pouring a new one by 11:00 A.M.” This quick turnaround, he says, is what customers tell him they most appreciate about his work. 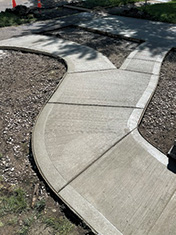 ANOTHER SERVICE HE LIKES TO OFFER IS PERSONALIZING DRIVEWAYS and patios and whatever else people might want to imprint with their unique signature, whether that’s a handprint or a child’s name. Or a pet’s pawprint – even cats can be persuaded to meander across not-quite-set concrete to create indelible kitty tracks.

Summertime is high season for driveways, but that season vanishes once Michigan’s frost laws come into play in November, a legal aspect of cement work that’s not well known by the public. Frost laws govern seasonal load weight – the restrictions prevent roads already tenderized by frost from becoming more damaged. That means Aaron and his crews can’t haul the amount of cement or stone they’d need to lay a driveway in a single truckload. Translation: have your patio installed between November and April. Smaller jobs aren’t impacted by frost laws, plus lawns become a lot sturdier and it’s easier to get machinery around to the back of a home.

Turns out there is something to be said for Michigan winters!