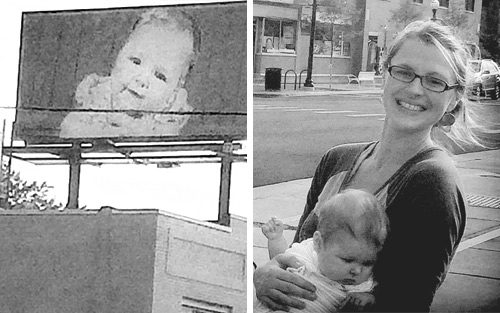 Everyone loves showing off their grandchildren, but not many do it in as big a way as Tom Carroll.

New parents Holly and Brad Carroll were completely shocked when Tom (or Papa Tom as the family calls him) put their six month-old daughter’s picture on a billboard in Ferndale. The child, Mae, had a portrait taken at day care when she was six-months-old earlier this year. The resulting picture was so adorable it was immediately passed around the entire family. Sweet Baby Mae (as she is affectionately called) is propped up in front of a green background with a clip in her hair and a perfect little smile.

Once the billboard was up, Papa Tom took the family out to eat. As they walked to the restaurant, he led them a different direction, swearing he knew a shortcut. This “short cut” brought the family to the Ferndale Foods parking lot, with a direct view of the Baby Mae billboard.

Holly looked up and freaked out. “My husband said my reaction was like I spotted Ryan Gosling,” she laughed. When her husband saw the billboard, he was speechless. Needless to say, Papa Tom was very pleased with the reactions.

The next two weeks were full of phone calls and questions. Family and friends constantly posted their pictures of the billboard to Facebook. While grocery shopping in Western Market, Mae was even recognized by a stranger.

When the billboard was taken down, the family got to keep the printed picture. They have it securely rolled up in their home and plan to bring it out for Mae’s first dates, birthday parties and graduation party. “This won’t be the last time we look at it,” Holly says.

As for future grandchildren, the family thinks Papa Tom may have set the bar a little high. “We are definitely planning on more children, but we have no idea how he can top this.”

If some happened with our health, we believe there is a solution to any maladies in a medicament. What medicines do patients purchase online? Viagra which is used to treat impotence and other states coupled to erectile dysfunction. Learn more about “sildenafil“. What humanity talk about “viagra stories“? The most vital aspect you should look for is “sildenafil citrate“. Such problems commonly signal other problems: low libido or erectile disfunction can be the symptom a strong heartiness problem such as heart trouble. Causes of sexual disfunction include injury to the penis. Chronic disease, several medicaments, and a condition called Peyronie’s disease can also cause sexual dysfunction. Even though this physic is not for use in women, it is not known whether this treatment passes into breast milk.