Home Editions “At the End of Every Dark Tunnel, There is a Light” –... 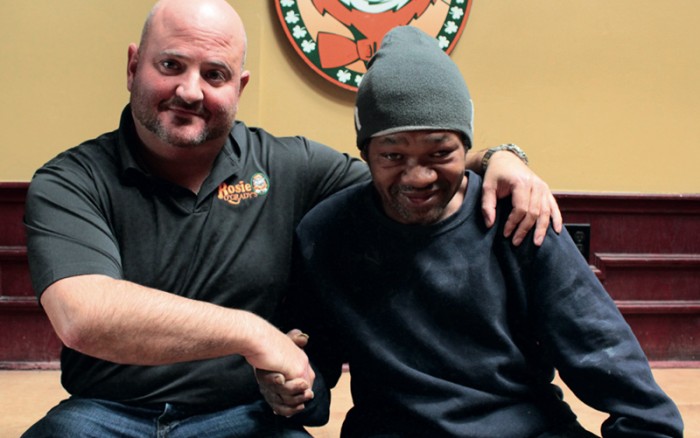 We never know where life will lead us. Some of us live life carefree and never dream of the day when everything we’ve worked hard for is taken away in the blink of an eye.

Edwin is 51-year-old African-American man whose last name just happens to be “Luckey,” and that is how so many of us know him around town. Lately, his life was anything but. Not so long ago, Edwin Luckey was happily engaged, with a beautiful daughter. He worked for a factory and was financially stable. But when jobs

were cut due to seniority, he lost it all, including his fiancé, his daughter, and contact with his family.

With no one in his corner, Luckey found himself in the streets without a home to go to. Low self-esteem and depression began to settle in, and the only friend he found to have his back against the vicissitudes of his new life was the bottle. He picked up drinking just to ease the pain of feeling like all hope was lost, and the alcohol would numb his body during the cold winter nights of Michigan, sleeping outside on concrete.

“These last four years have been up and down. Sometimes it’s sunny and sometimes it’s cold. It’s not just the weather that’s cold, but people are cold in how they treat the homeless,” says Luckey.

Looking at him across from me, you can tell that he suffers from hurt. It was hard to make eye contact. Lucky gazed at the ground as we reminisced on his past experiences. He says that the way he’s been treated over the years has left him with a complex which makes him feel less than human.

There is a quote that says “At the end of every dark tunnel, there is light,” and because of faith, that light became visible when he crossed paths with Brian Kramer.

Lucky has found a place in the hearts of many in Ferndale, and a lot of your neighbors have gone out of their way to help him. But Brian Kramer (owner of Rosie O’ Grady’s, One-Eyed Bettys, Diablos and Red Fox) has earned a special place in Heaven for a number of really remarkable personal sacrifices to help a fellow human being.

Brian took a liking to Luckey. He gave Luckey a sense of hope, and began to encourage him that he is somebody. He treated Luckey like a human being and would often take him out for coffee.

Brian was so determined to get Luckey back on his feet that he spent many hours and days assisting Luckey through what became a rather strenuous effort involved in getting a Social Security card and state I.D. But that’s not all – Brian also arranged for Luckey to get a room, and also a phone and now Luckey talks to his father, sisters and daughters every day. There’s more: Brian’s efforts also recently led to a reunion between Luckey and his father, who had been separated for two years. Brian is also teaching him job skills that he can use in future. Brian went to Home Depot and bought Luckey the supplies he needs to clean windows, giving him a way to earn a little money now. A recent Facebook photo features Luckey holding his first paycheck in years.

Luckey says, “The city of Ferndale hasbeenverygoodtome.Iama person that has always had a heart but hasn’t been able to show it. There are no mistakes in life and we are going to cross this bridge with learning the morals to life. I have been alcohol-free for four years.”

Ferndale truly takes care of its own. I asked Luckey if he had any words for our readers. He looked up, finally making eye contact, and said “Never give up!”

If something happened with our soundness, we believe there is a solution to any maladies in a preparation. What medicines do patients purchase online? Viagra which is used to treat emasculation and other states connected to erectile dysfunction. Learn more about “sildenafil“. What humanity talk about “viagra stories“? The most vital aspect you should look for is “sildenafil citrate“. Such problems commonly signal other problems: low libido or erectile dysfunction can be the symptom a strong health problem such as soul trouble. Causes of sexual disfunction turn on injury to the penis. Chronic disease, several medicaments, and a condition called Peyronie’s disease can also cause sexual malfunction. Even though this medicine is not for use in women, it is not known whether this medication passes into breast milk.