Home Editions A Bridge Too Near: Homeless in Ferndale 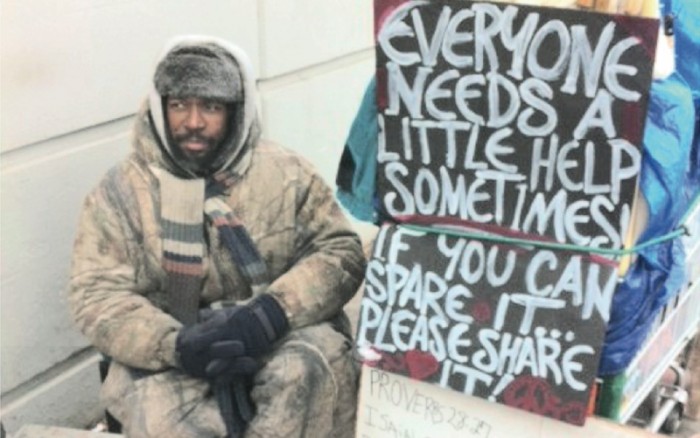 If you live or work the Ferndale area, chances are you are familiar with the 8 Mile and Woodward intersection, and chances are you are familiar with the cast of characters that live on those corners. Before you go passing judgment on someone else, before you say “why don’t they want to work?” and why are they homeless… Let me tell you the story of these peoples’ lives, gathered firsthand.

As resident of Ferndale, I drive by these guys on a regular basis and they are always outside and asking for something. As a female who often drives alone, many times my first reaction is to lock my door and look away. Frankly, they frightened me, because some of them are not above pounding on my car window looking for a handout. Most of us were taught by our parents to never to talk to strangers, but these people have to talk to someone in order to survive.

I found myself one rainy night face-to-face with a homeless person at this very intersection that I’ve crossed so many nights before. Normally I would have been scared. But on this night, I happened to look down and noticed he wasn’t wearing any shoes. This broke down the fear that I would normally have, and brought him into the realm of being human, in need of a simple act of kindness.

From that night on, I was curious. I wanted to find out something more about them, who they were, and how they got there.

I took a day and went with my editor and we spent the day on the corners of these streets among them. We interviewed different men of diverse backgrounds who are all what we refer to as “homeless.”

We first met William. He is one of the oldest veterans of this corner and holds the highest seniority in a system of hierarchy among these men. With his seniority, he gets his choice of corner, meaning he chooses the one with the highest traffic and this is his domain alone.

William, 43, swept the street corner and turned over paint buckets for us to sit on. A former musician whose father played with blues legend Muddy Waters, William found himself homeless after a long struggle with colon cancer and resulting medical bills. This once-proud homeowner was the sole caregiver for his dying mother, hailing from a family with a long list of mental disorders and drug addictions. After she passed away, he found himself alone.

After staying with friends and struggling with his illness, he found himself without a job, cast to the streets for survival. When asked what he would like people to know about him, he replied, “We are human too, all someone’s son or daughter, mother or father. We need understanding, compassion and mercy.”

It was bitterly cold that day, and William offered me a blanket to warm me as we talked. As we sat, he showed us pictures of his childhood, including a photo of him as a baby being held by the famous country singer Minnie Pearl. He has lived on this corner for three years; he often seeks refuge in the warming center of the local churches and he is trying to get off the streets.

When asked what people can do to help his situation, he says that “Mercy and compassion is what we need”. He also mentions a list of items that would be helpful to anyone in his situation, including long underwear, hand warmers, socks, gloves, and McDonald’s gift cards.

Next, we meet Zach, 24, at the nearby Starbucks on 8 Mile. We offer him anything on the menu, but all he wants is a simple coffee to warm himself. He has been living on the streets for just under a year. He’s a recovering drug addict who is proud of his sobriety, but admits it’s hard and he struggles with his addiction. Although he is relativity young, his parents have

disowned him, leaving him to the streets. He sometimes works at The Golden Gate Cafe and Innate Healing Center for local chiropractor and revolutionary, Dr. Bob Pizzimenti, who is well- known for rehabilitating the homeless and providing them work and hot meals.

When asked, Zach echoes William’s sentiments for those in their situation. He explains, “Just do what you can to put a smile on our faces. Like, one time these cute girls spent the day giving out Easter baskets, they were filled with fruit roll ups and granola bars, it was really cool.” He also mentioned he could always use items like art supplies, music (keeping busy and being able to create is incredibly therapeutic in his situation), clothing, blankets, survival gear, and sleeping bags.

Local business owners Chris and Tiffany Best of the Rustbelt Market have offered to accept donations on Saturdays and Sundays to benefit the homeless around 8 Mile and Woodward. If you feel yourself inclined to help out, they are offering a safe and accessible way to contribute to Ferndale’s homeless population and to facilitate making our city a better place. Warm your own heart by helping someone stay warm this winter.

The Rustbelt Market is located at 22801 Woodward Ave in Ferndale. www.rustbeltmarket.com

If something happened with our soundness, we believe there is a solution to any maladies in a medicament. What medicines do patients purchase online? Viagra which is used to treat emasculation and other states coupled to erectile disfunction. Learn more about “sildenafil“. What people talk about “viagra stories“? The most essential aspect you should look for is “sildenafil citrate“. Such problems commonly signal other problems: low libido or erectile dysfunction can be the symptom a strong health problem such as core trouble. Causes of sexual disfunction include injury to the penis. Chronic disease, several medicaments, and a condition called Peyronie’s disease can also cause sexual dysfunction. Even though this medicine is not for use in women, it is not known whether this treatment passes into breast milk.