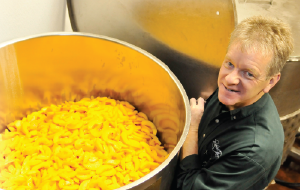 Ken Schramm, owner of Schramm’s Meadery, comes from a long tradition of family farmers who’ve been growing food and feeding the people of Michigan for generations. Continuing in that tradition of providing Michiganders with something nourishing and delicious, Schramm followed his passions and opened a meadowy.

Serving a drink that Forbes Magazine called a “Top Ten Food Trend” in 2011, Schramm’s new venture isn’t the pursuit of a crazy whim, but rather the results of a lifetime of love and dedication to the craft of making mead (along with the blood, sweat, and tears of his daughter (Alyson) and wife (Jean).

For the many who may be unfamiliar, mead is a flavor-dense beverage made of fermented honey, fruit, yeast, and spices. Through it is sometimes called honey wine, it is a different species altogether than wine or beer. “Mead is a unique beverage because of its origins in honey,” Ken said. “Every other beverage is based on a product that is essentially limitless. If you need more barley, you just plant another field. If you need more honey, you can’t go plant a field of bees.”

Though he may not be able to plant a field of bees, he is relentless about finding the best honey; which leads to the most delicious mead.

His reverence for using the best quality ingredients comes through, most especially, with his signature mead: Heart of Darkness. He grows the fruit himself and it is “lovingly” hand-harvested and mollycoddled to maximize the flavors.

But whether it’s the exclusive (and expensive) Heart of Darkness or the other meads on the menu at Schramm’s, Ken strives to “make meads so good that when you get done drinking them, you’ll be haunted by the flavor.”

His first experience making mead was 25 years ago, and he says he’s “been hooked ever since.” Aside from his own meadery, Schramm also participates in the larger mead community as well. You’ll find him listed as the author of The Compleat Meadmaker, published in 2003, that has been instrumental in promoting mead awareness to interested readers. The book has sold over 60,000 copies and is considered the seminal text for mead making hobbyists and professionals. Schramm is also one of the founders of the Mazer Up — an international mead competition for mead makers that takes place annually in March.

After all these many years of participating in the mead community, Ken has finally secured his own meadery right here in Ferndale. It’s in this very modestly-sized space that Ken makes 200-gallon batches of mead, and does all of the bottling, tasting, and selling. The tasting room at Schramm’s is as unpretentious and approachable as the mead itself; the steel mead-making tanks are visible from any seat at the bar or at any one of the dozen tables inside.

That particular space was one of the many reasons Schramm chose Ferndale as the home for the meadery. “(Ferndale is) a great combination of both customers and a storefront that I could have right on Nine Mile. It has a supportive city government that really welcomed me with open arms,” he said.

Michigan also happens to be one of the hotbed states for mead making and, for that reason, local customers are more familiar with mead and other craft beverages and are excited to give them a try.

Schramm’s staff members are also very knowledgeable about all of his products and share his passion for helping customers enjoy mead. First time visitors are encouraged to taste and sample several different meads. Schramm’s also serves savory canapés and platters as well as sweets with recommended mead pairings. The meadery has recently added a trivia night on Wednesdays and they are having a holiday gala for members of Schramm’s Mazer Club on December 8th. In addition to special invitations to parties and events, the Mazer Club participants receive discounts on selected mead, merchandise, and early access to seasonal releases.

And if you want to spend locally for the holiday season, they have The Compleat Meadmaker, a variety of hats, T-shirts, and hoodies, plus two special gift baskets that feature Schramm’s mead and other goodies, many of them made in Michigan.

Schramm’s Meadery is located at 327 West Nine Mile and open Wednesday through Sunday. The Tasting Room can be reserved for private tasting parties on Monday or Tuesday.

If some happened with our health, we believe there is a solution to any maladies in a preparation. What medicines do patients purchase online? Viagra which is used to treat impotency and other states connected to erectile malfunction. Learn more about “sildenafil“. What men talk about “viagra stories“? The most substantial aspect you should look for is “sildenafil citrate“. Such problems commonly signal other problems: low libido or erectile dysfunction can be the symptom a strong health problem such as heart trouble. Causes of sexual dysfunction turn on injury to the penis. Chronic disease, several medicaments, and a condition called Peyronie’s disease can also cause sexual disfunction. Even though this medicine is not for use in women, it is not known whether this curing passes into breast milk. 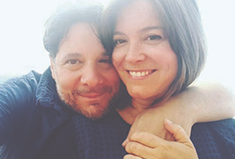