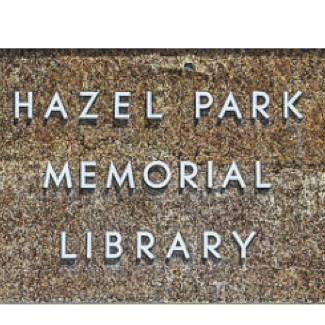 THE HAZEL PARK LIBRARY HAS BEEN IN BUSINESS FOR OVER 80 years, and has a rich history. It occupied two different locations before the City of Hazel Park constructed the current building on 9 Mile and
John R in 1970.

In May 1936, the Hazel Park Parent Teacher Association Council invited representatives from all religious, fraternal, business, social, and community groups to meet at the High School and discuss establishing a public library in Hazel Park. On November 4 of that year, a permanent library organization was established, a constitution adopted, and officers elected. The Library was formally opened on December 12, 1936, in a room loaned by the Board of Education in the basement of the Lacey School.

The Library operated in the basement until two lots were eventually purchased at the corner of Pearl and Rhodes in 1937, at a net cost of $368.89, for the purpose of providing a permanent site for the building. Current Hazel Park Library Director Corrine Stocker said, “As a true community project, more than 1,000 Hazel Park residents contributed either money or labor toward the building and equipment. Hazel Park pioneered in this field and proved that no community need be without a library.” The official opening of the new building was January 6, 1941, and that site is currently the home of the Hazel Park Historical Museum.

The Library’s present location was designed by Machida and Associates, who also designed the Hazel Park City Hall and Fire Station. The new building was constructed to replace the former Erickson Library, which was overcrowded.

“As the years passed, the Library took on a greater role, not only as a source for reading material but also as a center of the Hazel Park community,” said Stocker. “Services increased and changed with our increasingly technological times. Computers were installed in the 1980s, and WI-Fl access was installed in 2010, so patrons could bring their own computers and connected devices to the library to access the Internet as well. We now have 19 computers available for our patrons to use.”

The Hazel Park Library subscribes to Overdrive and RBDigital to offer its visitors access to thousands of books, audio books, and magazines. A whole host of programming is also offered, including regular book clubs, children’s story hours, Fun Fridays for Teens, movie nights, craft programs, Detroit Institute of Arts programs, and outreach services to senior citizens in the area.

“Every day, we generally offer one or more free programs to the public,” said Stocker. “For adults, regular monthly programs include stitch & Knit Night, a Make & Take Craft Club, and Book Club. For children, regular monthly programs include Family Fun Night with free pizza from Nick’s and Lego Club. We also offer weekly baby and preschool story times, weekly yoga, and computer tutoring. Once a month, we hold a Pop-Up Farmer’s Market with locally-sourced food.”

HAZEL PARK LIBRARY FRIENDS
THE HAZEL PARK LIBRARY FRIENDS (HPLF) is a charitable organization serving the Hazel Park District Library, and helping provide many programs and services. The HPLF organizes and runs fundraisers to benefit the Library, including selling snacks, candy, baked goods, plants, books and other items. Occasionally, the HPLF also raffles off gift baskets. Much of the money raised by the HPLF also gets donated back to the Library to pay for things that ii could not otherwise afford, such as perform­ers throughout the year, summer reading prizes, promotional banners, new folding tables, a scanner, and professional development conferences for Library staff.

“The organization donates thousands of service hours to the Library every year,” Stocker said. ‘Volunteer activities include cleaning and painting the windows, seasonal decorating, organizing the library’s storage areas, sorting donations, grooming the grounds, shelving materials, and assisting with programs. The Friends also promote Library programs and services via social media and represent the Library at community engagement events.”

The HPLF stocks the Library’s Little Free Libraries (LFL). LFL is an international program in which communities put out boxes, usually with the help of volunteers, and fill them with free books for residents to borrow and return. ‘We offer four,” Stocker said. “They’re located at Tuski Park, Scout Park (soon lo be moved near the fire department), the Rec Center, and the art park. These are full of donated books.”

“Thanks to the support of our tireless volunteers, our elected Library Board, as well as the help and assistance of the Hazel Park Library Friends, the Hazel Park District Library continues to grow and develop its resources to adapt to the needs of its patrons,” Stocker said.

CORRINE STOCKER, LIBRARY DIRECTOR
CORRINE STOCKER HAS BEEN EMPLOYED at the Hazel Park Library for 14 years. She assumed her current 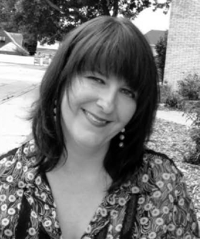 role after Hazel Park’s former Director, Jessica Keyser, left her position to take on the directorship role at the Ferndale Library.

Leading up to that point, Stocker explained, “I started as a half-time adult services librarian in March of 2004. Then they created a full-time position for me, and I worked in that capacity until I was promoted to Library Director in 2013.”

Stocker earned a four-year degree in English from Michigan State University and took a position at Gale Research following graduation, where she was employed for several years. The company paid for her to return to obtain a post­graduate degree in library sciences from Wayne State University. She eventually left Gale to be a corporate librarian for Arthur Anderson before heading to Hazel Park’s library.

She said to be successful in her position, “you have to like helping people.” She added, “I love being able to help people in a meaningful way.” She also enjoys the ability to be constantly learning. ”You learn something new every day. When someone comes to the reference desk to ask a question, you may not always have a ready answer, so you have to try a bunch of things and learn together.”

Stocker loves to read but doesn’t necessarily have a favorite book or author. “It’s constantly changing,” she explained. “It just depends on the day. I love to read, of course. I read every night and prefer this to watching television. I also love to garden, go hiking, and just be outdoors.”

The Hazel Park Library offers a unique opportunity for her to provide a variety of resources and activities to patrons while getting to know each and every one of them. “Our library has a reputation as the little library that does a lot,” said Stocker. “And, everyone knows everyone – it’s kind of like Cheers!’

Started in 2009 by Wisconsin resident Todd Bol, Little Free Libraries are small wooden containers mounted on a post in a public place and filled with books. Bobby McDermott, a member of Neighborhood Enrichment, spearheaded the Hazel Park initiative, and already they have helped create four Little Free Librar­ies around the city.

“The goal is to encourage kids to read. And adults too, with children, and to have conversations about books

with kids. That conversation may be more important than the number of words a child knows entering school,” McDermott says. “Let kids experience the joy and adventure of reading, the book you ‘don’t want to put down’ with a flashlight under the blanket!”

The containers used for the project are recycled newspaper stands built by resi­dent artist Richard Gage, and books for the libraries have been donated by Neighborhood Enrichment President, Lois Reithel.

“Richard Gage built the structure designed to look like a library that sits on top. He donated his time, materials and creativity,” McDermott says. “Susan Fried­man, now a retired art teacher who taught here in Hazel Park, did the artwork to transform Richard’s wonderful construction into a library.”

Friedman describes how she dressed up the newsstands, using inspiration from a Beverly Cleary book for the one located in front of Hoover Elementary School.

“I used the images of her childhood experiences as inspiration for the four sides of the little library form. The roof is patterned with a quaint shingle design. Each side represents a season and three of the sides are painted with windows that reveal the activity inside the library,” she says. “There are shelves of books with children, a dog, a librarian helping a little girl, and a cat in an upper window. Hand imprints of kindergartners cover the old newspaper base.”

These libraries have added creativi­ty to the landscape of Hazel Park, and are seeing interest among chil­dren.

“I was pleased to be a part of something that supports reading and the experience of holding books rather than electronic devices,” Friedman says. “I thought it unlikely that they would get much use, but have since learned that they are visited fre­quently, and children love the idea.”

McDermott says the groups plan to add another Little Free Library to the city in the future, and that the benefits of the project are endless.

“They improve literacy, strengthen our neighborhoods and schools, bring families and kids together, build trust and community,” he says.