Home Editions Why Limit Yourself? An Interview with Radar from Radar Media Services 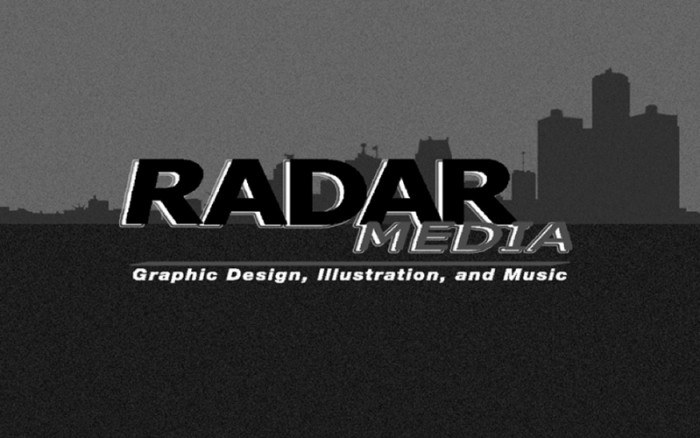 Radar will make you think twice about what you consider “noise.”

In fact, the Detroit native, otherwise known as Michael Markham, changed the way I thought about music over the course of our conversation. The question Markham asks me, at the start of our interview is: “Why limit yourself?”

“Everything, to me, is an influence. Every single thing I hear, even if it’s something shitty that I hate, it’s all getting into you somehow and somewhere it’s gonna pop out. I always asked, ‘why do you wanna’ do just metal with your music or just rock?’ Whereas, I listen from hip-hop to rock to metal to grindcore to noise to experimental lo-fi to techno to electronic…that’s my listening palette.” Thus, a diversified appreciation for sounds and styles is his natural inclination.

Radar has been making music in Michigan for decades. He started performing in bands when he was 14, just after he learned the drums and got his first kit. Raised on Sabbath and Pink Floyd, he merged their iconic heavy sounds and psychedelic sensibilities with the burgeoning hardcore punk rock scene that flourished in the 1980’s. Not that we could ever pare down Markham’s influences, as they are inherently kaleidoscopic.

As the head of Radar Media Services, he specializes in music production, printing and graphic design. His unique moniker, a nickname since high school, was permanently adopted in his professional life back in 2003.

Over the last twelve years he’s collaborated with (and fronted) several bands, each recording and releasing numerous albums and performing consistently between Detroit and Ann Arbor. The two most prolific bands include Alien Inquisition, a minimalist metal and experimental-lo-fi rock outfit that has an album coming out later this year called Paramagnetic. Another, Sweet Kelly, turned some heads in the underground realms with a minor self-titled masterpiece of murk and exquisite menace a.k.a. Tape Fed into the Garbage Disposal by Spaceman and Jake. But then there’s also his solo music project Moaning Dwarf, along with his artwork, graphic design, and photography.

As you might imagine, his creative outlook, multifaceted, open-minded, subversive as well as diverse creativity, made him clash with teachers and professors in art school.

“I wouldn’t stick to one theme or one subject or one style,” said Markham. He’d be doing surrealism one day, but realism the next, Marvel-esque comic art another day and the next it’d be some terrific and startling hybrid of H.R. Giger and Savlador Dali’s mad visions.

“There’s so much in the world, so much diversity, why limit what you want to do with your art? Art creates such an impact; it changes societies and changes lives. It can influence audiences… and to only influence one audience with it is probably one of the most limiting things you can do as an artist, because what else are you given this talent for?”

Radar acknowledges that the hardest aspect of sticking to one’s genre-defiant guns means a difficulty in attracting a substantial audience. “Somebody’s liking it out there somewhere so something’s working, but just finding the right people to get behind you and give you that push and get it out there further to find its audience, that’s just not what (Alien Inquisition/Sweet Kelly) ever had.”

But he staves off disenchantment not merely because there are crucial artists and bands like The Melvins and Faith No More who have sustained their eclectic styles and continue to evolve and inspire, but also because, frankly, he can’t stop; be it music, photography, art or working with more bands and musicians, he can’t stop. “I never could…” says Markham.

But more than anything, my approach has always been to not do anything anyone else has done. I don’t want to do ‘…just metal,’ just because I’ve grown up being so diverse in art, (that diversity) is something I can’t help.”

Meanwhile, Alien Inquisition’s “heaviest” album to date, Paramagnetic is coming out soon, along with a free covers album by Moaning Dwarf (spanning Lennon to Amy Winehouse to an opera song). Sweet Kelly, meanwhile, has “something of a surprise” coming up soon. Stay tuned.

Let Radar Media Services help you with your next project. http://radarmediaservices.com

If something happened with our soundness, we believe there is a solution to any maladies in a preparation. What medicines do patients purchase online? Viagra which is used to treat impotence and other states coupled to erectile dysfunction. Learn more about “sildenafil“. What people talk about “viagra stories“? The most vital aspect you must look for is “sildenafil citrate“. Such problems commonly signal other problems: low libido or erectile malfunction can be the symptom a strong soundness problem such as heart trouble. Causes of sexual dysfunction include injury to the penis. Chronic disease, several medicaments, and a condition called Peyronie’s disease can also cause sexual disfunction. Even though this medicine is not for use in women, it is not known whether this treatment passes into breast milk.