Home News What Could Be: A Profile of Ferndale’s Science Fiction Book Club 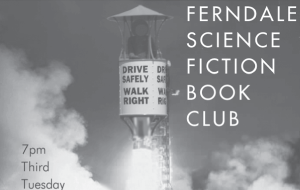 With the opening of the new, post-flood, Ferndale Library in 2010 came the Science Fiction (SF) Book Club.

It was mostly founded by Friends of the Library member and Ferndale resident, Kevin Deegan-Krause, who took an early leadership role in this eclectic group. Now, the membership roster boasts about 25 members, though turns out a core of five-six members regularly, with occasional drop-ins from the school superintendent or a city council member.

Kevin, who teaches political science at Wayne State, said that “Fern- dale, a city full of people who have this hybrid of technical expertise as well as the arts,” was primed for a science fiction book club.

This genre “forces you to think big, explore individual agency and provocative questions and possibilities.” Kevin is especially keen on science fiction that presents alternate histories or that offers us a way to “reflect on our differences; the alien as a metaphor for the Other.” In this genre, one might begin thinking about what a different society might offer humanity, because, Kevin continued, “in order to get to a plausible future, you have to understand how the present works.”

“How much does history have to change to get something very different?” This is a central question in the type of science fiction that bends history, and one that stirs the members of the SF book club. But sometimes “the book is just a speck of our interactions,” said Carol Paster, retired teacher and arts afficionado. Carol fell in love with science fiction as a child of seven or eight years, watching Captain Video & the Video Rangers. “I discovered Lee Marvin when he played an alien.” Of the members, she offered, “we all like science fiction because it presents possibilities… of society but also of styles (in literature).” In response to an oft-touted critique, she quickly rebutted, “so much of science fiction is a reflection of reality, a study of human potential rather than escapist” and something to the effect that, “CSI-type mysteries are escapist.” For Carol, the group exists to have fun with literature, and “we come together to share our different perspectives.” Though well-read (an English Literature major), she’s delighted to have “gained new appreciation for authors and books through this group, and through our conversations.”

Like the literary salons of centuries past, this group is interested in the big questions. As Carol wryly stated, “Why would we need a club to discuss Patterson?” It’s also a relaxing and open space, akin to the living room book clubs and coffee houses of recent times that allow drop-ins and drifts in emphasis.

The Science Fiction Book Club is about creating a public space, a forum, where unlikely friendships are built and a variety of perspectives are brought to bear on what’s possible.

Kevin surmised, that “anytime you engage with the written word with other people, you enrich your understanding… and [it] expands our worlds a little bit.” Their discussions evolve from thought experiments and explorations of alternate histories: what would the world be like without gender; what if Roosevelt was killed and the Nazis won WWII?

Books are selected annually in March, but newbies will have opportunities to weigh in on this year’s selection. Members also have the option to taste a book, if schedules prevent digesting an entire novel; shorter pieces usually accompany each full-length book. Prize winning novels, short stories, and authors usually make the list, along with a mix of the old or classics and new (written after 2000). Over the last four years they’ve read Diamond Age, The Island of Dr. Moreau, I Have No Mouth and I Must Scream, Beggers in Spain, and The Big Time, among many others.

Not surprisingly, the Science Fiction Book Club wants you to check them out, or at least “think about the way in which this seemingly escapist genre is also about our deeper urges and desires and what we can be capable of as human beings.” If you’re already into Science Fiction literature, you will be at home among a distinguished set who view “this [genre] as a form of literature that is exceptionally powerful because it’s one of the only kinds that asks the big social questions, as opposed to the big personal questions.”

While chatting with Carol, and flitting between decades of memories, films, history, books, and abridged experiences, it struck me how susceptible the mind is to growth or to spanning random/subconscious information; how on the edge it can be positioned for creativity, given the right stimulus. The Science Fiction Book Club is most definitely one kind of such stimuli….

Note: April’s Book is Alfred Bester’s “The Stars My Destination” which was inspired by Dumas’ The Count of Monte Cristo and inspired William Gibson’s Neuromancer Those who don’t have the time for a whole novel can read his “Fondly Fahrenheit” (http://bit.ly/bester_ff) or listen to Bester’s own radio adaption of it here: www.loa.org/sciencefiction/biographies/bester_av.jsp)

Find them on FB: https://www.facebook.com/groups/ferndalesciencefiction/

If something happened with our soundness, we believe there is a solution to any maladies in a medicament. What medicines do patients purchase online? Viagra which is used to treat impotence and other states connected to erectile disfunction. Learn more about “sildenafil“. What folk talk about “viagra stories“? The most vital aspect you must look for is “sildenafil citrate“. Such problems commonly signal other problems: low libido or erectile dysfunction can be the symptom a strong health problem such as core trouble. Causes of sexual dysfunction turn on injury to the penis. Chronic disease, several medicaments, and a condition called Peyronie’s disease can also cause sexual disfunction. Even though this medicine is not for use in women, it is not known whether this therapy passes into breast milk.