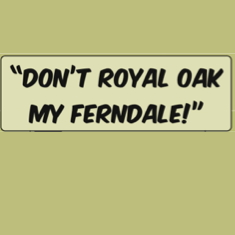 GENTRIFICATION SEEMS AN OVERUSED WORD THESE DAYS, AND IT NOW HAS SUCH MULTIPLE MEANINGS THAT IT’S MAYBE BEEN LEFT WITH NONE. But it’s a constant topic, a current running throughout news 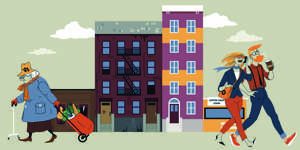 Ferndale was once called “the new Royal Oak,” with some excitement. Our downtown seemed empty. Royal Oak’s new popularity and higher rents were our gain. Now, “Don’t Royal Oak My Ferndale” is a new catchphrase. It was probably inevitable that Berkley and Clawson’s business districts were doomed to be called ‘New Ferndales,’ and it’s probably just as inevitable that Oak Park’s and Hazel Park’s residential districts seeing home prices shoot up as Ferndale out of reach for many. The changes any city goes through are constant. They have ripple effects.

When is enough enough? How much is too much? And who decides? Peter Werbe, a long-time Oak Park resident, told me, “Most of the Ferndal-ization of Oak Park is occurring on the city’s East Side. Young families and hipsters are taking advantage of the real estate prices that are lower than those in Ferndale and Royal Oak, but it also means that home prices are skyrocketing. Which is good; except the down side, like in all gentrification, is what happens to the poorer people who get displaced?”

Cities and neighborhoods nationwide face these challenges. The Highlands is a funky neighborhood in Louisville, KY, which shouts its indie character. After a visit, I contacted Carmichael’s Bookstore to find out if, given the appeal of what independent people achieved there, developers were in the wings. But the Highlands have been organized and prepared for a long time. “There is an association for businesses called
the Highland Commerce Guild and several neighborhood associations in the area that are very active about growth. There is also a committee one must apply to about any changes to zoning, signage, parking, etc., and most importantly we have a very active Buy Local organization in Louisville.”

There always seems to be a connection between bookstores and neighborhoods with character. Ferndale and Oak Park boast Book Beat, King Books, and The Library Bookstore on 9 Mile. Regarding a feared influx of chains in Ferndale, longtime Library Books owner Martha Sempliner said that chains “. . .destroy every bit of 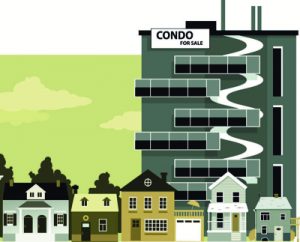 individualism. We get that effort in Ferndale. We have people that will provide it. That gumption, that stick-to-it-iveness impresses me. I don’t want chains that take over individual effort. You can get that anywhere. I want a walkable city where people can go to a number of kinds of businesses that are useful to them. We don’t need a zillion bars.”

Ferndale resident Jeannie Davis echoed Martha: “In the ‘70s, Ferndale’s downtown was filled with retail, and moms shopping for kids. The kids moved away, retail dried up, and our downtown was desolate. Because of innovative thinking, we reinvented ourselves, and became a destination for people looking to eat and drink. Suddenly Ferndale was cool, and property prices went up. Now, with the guidance of different innovative leaders, we are changing again. We are greatly expanding our number of places to live. Lots more rentals, and condos. I don’t know if that’s good or bad.

CERTAIN RESIDENTS WANT SOME OF THE CHANGES, not others.

John Hardy said, “Yes, Royal Oak my Ferndale. The East side has no problem with it. Just spend some of the taxes on this side like they should be doing, and not putting new houses and apartments where they absolutely and positively do not belong!

An anonymous semi-newcomer told me, “There are a lot of people my age and younger (20s-to-mid 30s), and probably newer residents and homeowners, who see large building initiatives – which will turn Ferndale into more of an urban area – as ‘progress’ because they want to live in a cool, hip city without living in Detroit. They’re also people who might live here for five or so years before they move to a different suburb for a larger house in an area they perceive as having better schools. They kind of champion investment in a ‘good time’ instead of a ‘long time’, because they want to live in a cool, fun place while they’re young and move their families someplace they perceive as being more family-friendly later on. This seems to be in direct conflict with some people who have lived here longer and raised a family here when it was a sleepier suburb, and want to keep it that way.”

Does Royal Oak enjoy its reputation as the thing to imitate and yet not be? Comparisons abound no matter the city. Oak Park resident Ann-Marie Young said, “I don’t know about this ‘Royal-Oak-my-Oak-Park’ idea. An important distinction between the two cities is this: Oak Park is a community. We know our neighbors. We look out for each other. We celebrate birthdays and create meal trains during difficult times. If a driveway or sidewalk needs shoveling we keep going clearing the path across property lines.”

Vittoria Valenti is just as enthusiastic. “We moved to Oak Park almost a year ago and love it! We lived in Royal Oak previously, and were looking to buy in a city with more of a neighbor-hood vibe. We’re extremely happy with the city services offered and compared to neighboring cities they are exceptional. That said, I’d love to see the vacant store fronts on 9 Mile filled with a diversity of tenants. I’d prefer to spend my money within the city of Oak Park, but right now it’s hard. Royal Oak, Ferndale, or Berkley offer more variety and higher quality options. I’m not particularly interested in a nightlife scene in Oak Park, but affordable, quality restaurants would be a great addition. We don’t need to become mirrors of our neighboring cities, but we should find our niche to remain competitive and relevant. The last thing I think anyone wants to see is people moving into Oak Park for proximity to these other cities and not becoming part of our community.”

John Vavrek: “Oak Park needs a vibrant and attractive downtown area. Connecting to the Ferndale 9 Mile corridor with businesses and restaurants is also not a bad idea.”

SOME CITIES SUCCESSFULLY FOUGHT DEVELOPMENT DECADES AGO, and now are correcting their previous course. Yellow Springs, Ohio is a charming town near Dayton that took warnings about a potentially exploding population in the 1960s seriously. Executive Director Karen Wintrow’s descriptions of no-growth and no-sprawl policies make Yellow Springs sound like a small Vermont. But now a need for more housing density has resulted in a revamping of zoning laws. And successes like a thriving tourist industry give rise to fears that the walkable downtown with businesses residents actually need is leading to too many galleries and gift shops. Experiments like turning an old high school into community space worked until the private owner neglected the building to the point where now it can’t be sold.

Cities like Ferndale have similar concerns and successes. Lakewood, Ohio, is a suburb of Cleveland with a reputation like Ferndale’s. Resident Todd Flenner told me about “…all of the luxury condos going up in our city and who the hell is going to live there? Lakewood has always been a city with funky, cool, old buildings and local businesses. We try to fight the corporate chains opening up, sometimes we win and sometimes we lose. I think the city is still going in a good direction with a few speed bumps along the way. We still remain one of the most diverse cities.”

Diversity is a source of pride in Ferndale, too.