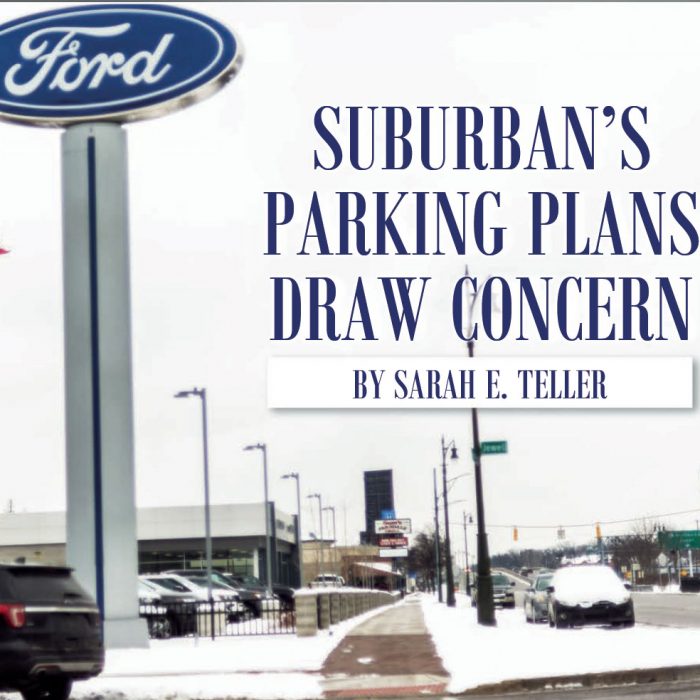 WHEN SUBURBAN FORD MOVED INTO FERNDALE, the company had some work to do in and around the existing facility. But this didn’t stop the family-owned business from putting down roots. Suburban Ford’s Platform President, Ron MacEachern, said, “Our company normally buys a store in a geographic area that we can develop into a larger footprint. If we have a large footprint, we can do more.” 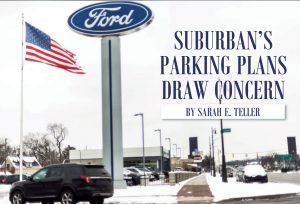 Suburban began operations in Ferndale with the Buick GMC lot on Woodward in 2012 and acquired the Ford lot two years later. “When we got here, some major remodeling needed to be done,” explained MacEachern, including getting rid of a rodent infestation and remediating the water. “We sunk $5 million into a total campus remodel,” he disclosed. Part of that remodel included landscape improvements with greenery and brick pavers added to the front of the building. “The City asked us to do this,” MacEachern said. “We lost parking because of it, but we were happy to cooperate. We added to the beautification of Woodward Avenue.”

According to MacEachern and General Manager Jeff Huvaere, the company started with one parking lot and also a house kiddy-corner from the area. They also bought out a few other homes over time, making offers over list price. MacEachern explained, “The people who lived in these homes knocked on our door and told us they were interested in selling.” The renovations paid off, and Suburban Ford quickly expanded. Staff increased substantially to 75 employees. However, the rapid expansion came at a price and parking and other issues soon arose.

In November 2018, Suburban issued a mailer to local residents that read: “While the dealership has been through a lot of physical changes and growth…we understand that you as our neighbors have been impacted by those changes as well, with increased customer traffic, construction traffic and noise and increased street parking activity on Silman and Jewell Street.”

SUBURBAN SCHEDULED A PUBLIC MEETING For December 10, 2018 regarding “the dealership’s operations and future proposed plans,” as specified in a letter distributed by the City of Ferndale. “I don’t think they expected a standing-room-only crowd to voice their concerns,” resident Roberta Kuhn said of the meeting. “But those who have been impacted the most were there. They’re concerned about their property values, safety, and the impact on the neighborhood of tearing down old homes zoned residential to make parking lots.’”

“Progress is uncomfortable for some people,” MacEachern said of the meeting’s outcome. “But for every complaint we’ve gotten, we’ve received at least that many compliments.” Of the parking situation, he said assuredly, “We don’t park [cars] there illegally, and they’re not there overnight.” Huvaere added, “We haven’t gotten one parking ticket I can think of since we’ve been here.”

Some residents believe ‘no parking’ signs have been pulled from certain areas so the dealership isn’t issued tickets. And they’ve noticed other problems, such as an incident of antifreeze leaking onto surrounding streets.

Kuhn said, “There was a car parked across the street from my house where it is legal to park. However, it was leaking antifreeze. I went to the City and showed a picture of it to Code Enforcement, so he drove over and talked to the service managers and they had it towed. Everyone around here has cats and dogs. I’m worried about our animals and the environment.” She added, “There was also a mechanic working on a car right in front of my house. There is no parking on the north side of Silman. Another big issue has been mechanics test-driving cars, fast-braking, etc. up and down the street.”

“ANOTHER BIG CONCERN WAS THE PLAN to tear down five homes at the same time; four on Silman and one on Jewell. Some of these homes are close to 100 years old. Neighbors are concerned about lead paint, asbestos and other toxic materials that would be released in the environment and the adjacent homes.”

“Other issues discussed included home values, conserving greenspace, snow removal, limited street corner visibility due to parked cars along Woodward, and scattered trash and debris. In fairness, some of these issues have been addressed since the meeting. However, rezoning residential for parking is the pending concern.”

MacEachern responded, “We have never been cited for any environmental thing. We have never had a parking violation. Yes, we have vehicles parked on the side streets, but we have a strict rule about where employees are supposed to perform test drives. We also have rules for where customers can test drive vehicles.”

“I can tell you this,” MacEachern said. “As far as any antifreeze, we are diligent about following OSHA and safety guidelines.” “Otherwise, we’d lose our license,” Huvaere said. “The bottom line is there are a few unhappy neighbors and parking is a legitimate concern we’re working with the City on. There’s a designated test drive route,” Huvaere added. MacEachern said, “We’re hitting max capacity, and we need a couple hundred parking spots.”

BOTH HUVAERE AND MACEACHERN SAID addressing residents’ concerns is their top priority. “I know I plan to stay here. I love Ferndale,” Huvaere said. “I was working in Sterling Heights for seven years before I came here, and there’s a community feel to Ferndale that there wasn’t there. We get the sense that residents just want to be in the know, and we would too. We’re here to stay.”

Justin Lyons, Planning Manager at the City of Ferndale, said there are no future meetings in the books with the City to discuss parking, explaining, “Suburban’s team was going to review the feedback given at the December community meeting and decide their next steps. The request to expand parking would be driven by Suburban and is not a City-led project. The City would review the request once received and would notify residents in the immediate area via the email list started at the community meeting and mail. The most recent proposal by Suburban would likely require rezoning, which requires public hearings and public notice via mail and newspaper at least 15 days prior to a meeting.” He suggested, “Residents should use SeeClickFix for issues related to parking and contact the police non-emergency line, 248-541-3650, for speeding or other safety issues. Suburban Ford’s management team has also encouraged residents to reach out directly to them.”