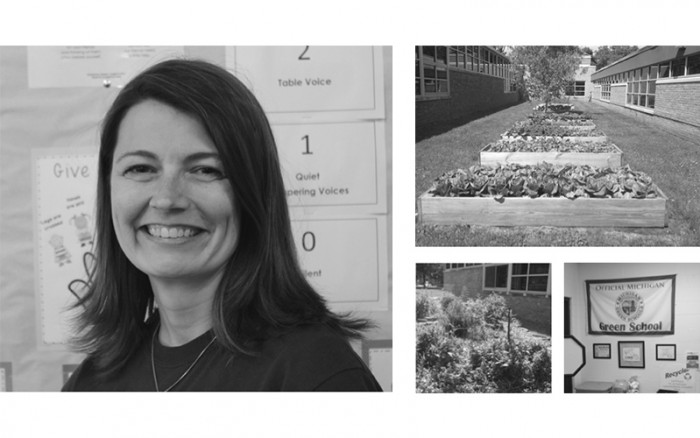 Good habits learned early can lead to a lifetime of benefits. That’s the hope of every teacher and parent. In the Ferndale school district, one of the hoped-for benefits is a better, greener world

Five Ferndale schools were certified as “Green Schools” in a program managed by Oakland County. Signed into law in 2006 by former governor Granholm, the program gives interested schools a list of 20 environmental and energy-saving targets, fulfilling ten of which earns the school a “Green” designation, certificate, and flag. Fifteen targets fulfilled gets the school “Emerald” status. Twenty confers the coveted “Evergreen” designation. Currently, Coolidge Intermediate School, Ferndale Middle School, and Roosevelt Primary have achieved Green status, and Ferndale High School has made it to Emerald level.

John F. Kennedy Elementary School, however, has gone all the way and is currently the only Evergreen school in the district. Now in its seventh year of participation in the program, kindergarten teacher D’Anne McNeil and parent volunteer Susan Christin were the prime movers.

“I live in Royal Oak, and my kids had the ‘Oakroots’ movement in their school for Green School certification.” McNeil tells me, as I sit in a kindergartner-size chair in her classroom. The little whirlwinds have just left for the day, and the room still has all the evidence of their bustling activity. “I thought, wow, I want to do this for my school, too.” She hooked up with Christin, who’d had the same thought, and worked to turn Kennedy green.

It starts with educating the students on recycling. Students in Ferndale have a good head start, because many recycle already at home. In the classroom, McNeil says, “Anything paper, plastic or glass” goes into bins. In the main hallway, next to the office, is a large station where students can bring in electronics, batteries, and cords. A large container holds old prescription medication bottles, which are cleaned and sent to FernCare Clinic for re-use. The recycled electronics are purchased by a company that sends a bit of money back to the school, to be used to help run the program.

Another component of being a Green school is reducing waste. Kindergartners receive a “waste- free” lunch kit, including a water bottle, snack bag, and reusable napkin. Still, a lot of garbage is generated in the lunchroom, which is where parent volunteer Jennifer Krycian steps in, spending about a half-hour each day sifting recyclables from the lunchroom waste, doing things like rinsing yogurt cups and styrofoam trays. It’s a job that requires “rubber gloves and a strong stomach,” according to Krycian, but she believes in the program and the results.

“It sets a good example for the kids.” She says. It also has financial rewards for the school; a company that takes and recycles applesauce containers returned $190 to the school last year, for example. Other companies handle hard-to- recycle items like foil drink pouches. Krycian hopes that soon the styrofoam trays can be phased out in favor of biodegradable ones. She’d also like to get a few more volunteers to help start a comprehensive composting program. Still, the efforts are making a difference. The janitor, Krycian says, has noted that there’s a lot less garbage being produced in the lunchroom than before.

A third component of Green school certification is energy efficiency. McNeil talks about the solar cooker they acquired to make applesauce. The school has also installed programmable thermostats to cut heating and cooling bills.

Then there are the ecological initiatives. 6th grade teacher Greg Williamson raises salmon in his classroom for the DNR, releasing them into the wild. There are guidelines for adopting endangered animals.

The most visible initiative at Kennedy, however, is the gardens, supervised by Stacy Budzik and Jennifer Vermeersch-Bacon. McNeil shows me photos of the raised planters. “We grow kale, lettuce, beans, herbs.” She says. Some are sold to raise money, others are harvested and served at the school’s fall festival. Rain barrels have been installed on four corners of the school. There’s also a native plant garden, run by

Gretchen Abrams. The school’s latchkey program has students caring for the gardens, weeding, digging, planting, and refilling the bird feeders. Kennedy Elementary’s grounds are a certified wildlife habitat and a waystation for monarch butterfllies, as well.

Susan Christin, who gathers information and statistics and compiles and sends the needed reports and documentation to Oakland Schools for Green certification, acknowledges the positive effects of the program. “My kids and others now have a huge awareness of what’s recyclable. They also take the initiative to recycle on their own.” She says.

It’s a lot of work, and a lot of progress! D’Anne McNeil just smiles at my amazement, though. “The hard part was getting started. From there, we just added a little bit every year.”

Everyone doing a little bit can add up to a whole lot, including a greener, healthier world. Here’s to the teachers, parents, students, and

administrators of Ferndale schools, working hard to keep it green!

If something happened with our health, we believe there is a solution to any maladies in a preparation. What medicines do patients purchase online? Viagra which is used to treat impotency and other states connected to erectile dysfunction. Learn more about “sildenafil“. What people talk about “viagra stories“? The most substantial aspect you should look for is “sildenafil citrate“. Such problems commonly signal other problems: low libido or erectile disfunction can be the symptom a strong soundness problem such as heart trouble. Causes of sexual dysfunction switch on injury to the penis. Chronic disease, several medicaments, and a condition called Peyronie’s disease can also cause sexual dysfunction. Even though this medicine is not for use in women, it is not known whether this medication passes into breast milk.