Home Editions New Haus On the Block: The old Save-a-Lot is about to undergo... 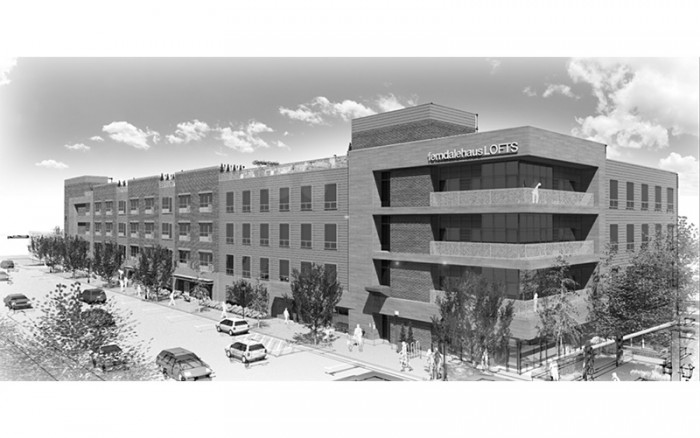 The old Save-a-Lot store, at 430 West 9 Mile Road, sits silent and vacant, an eyesore. The parking lot yawns, a dull desert of asphalt. Wasted space on a busy street.

But soon, work will begin to demolish the old store and convert it and its parking lot into something much more useful and beautiful.

Uh-oh. The subject of redevelopment on 9 Mile can be a tricky one, especially when development plans grow too large or complex. The recent failure of the 3-60 Project is a case in point. Too large for the space, too much disruption of business during construction, and an end product that just wouldn’t have fit the character (and needs) of Ferndale. So, when Ferndale Friends got word of plans for this new development, we looked into it.

At the Rochester office of Designhaus Architacture, Peter Stuhlreyer, AIA, Chief Architect and CEO, lays out the plans. The illustrations reveal a striking, L-shaped, four- story structure with a varied facade. It will run the length of the current lot, hiding the building’s parking behind and underneath; parking sufficient for the residents and businesses in the building, plus a tiny bit extra.

“We’re trying to build a high quality housing project… for anyone.” Peter says, over a constant background whir of power tools. Designhaus, too, is in the process of being upgraded. “Ninety units, about half single- bedroom, about half two-bedroom, with a few larger units on the corner. Businesses on the ground floor. Elevators, stairs, workout facilities, a common room, gathering spaces. There’ll be a small public patio on the roof.”

How do you fit a new building into an existing street?

“You don’t want to pander to history, to create some kind of phony pastiche of old buildings.” Peter explains. “On the other hand, you’re not trying to reinvent the wheel, either. There’s a strong tie to context. You don’t want to introduce something foreign, but you also don’t want to try and appease everyone, to make them comfortable just to get approved.” The world, he says, is full of buildings designed with the latter philosophy in mind, and it shows in the general sameness and dullness that abounds in shopping centers and housing developments. He smiles, and adds an important caveat. “You also don’t want to shock them.”

On the nuts-and-bolts side, there is a lot of modeling, 3D rendering, and street viewing. The new structure is designed to do more for 9 Mile than just provide more living and business space, though.

“9 Mile starts to fizzle out as far as its pedestrian energy at that point. This (building) says, we’re still part of that energy.” Peter says that research showsthe effects of “holes” in the urban landscape, namely features like surface parking lots.

Studies show that once pedestrians hit an area with an open lot, they tend to cross the street and walk back the other way. 430 West 9 Mile will fill in that hole.

“We have open storefronts and businesses. There’ll be public art (to be placed by the DDA.) On the east side of the building, there’ll be a small musical performance area, facing into the vest-pocket park that will go there. It will really energize the area.” Peter talks about other ideas, such as shuttle buses that will run to the planned rail line on Woodward to reduce traffic.

Designhaus has been around for close to 20 years, focusing on mixed-use projects and things that Peter calls “difficult sites.”

“People are moving back to the cities,” He says. “The properties (that are there) are troubled… problems with space, zoning, environmental issues… it’s much harder than developers going out, buying five acres, and putting up a building.” They’ve worked on projects as diverse as student housing, microbreweries, and converting old offices and schools into living space. “We have a reputation for getting things done in (challenging) situations,” Peter smiles again, “and coming out the other side without the public coming to our office with torches.”

Peter says there wasn’t any difficulty with the process in Ferndale, though. Designhaus worked very closely with the City of Ferndale and gave them exactly what they asked for; something suited to the scale and feeling of the neighborhood, yet moving it upward and outward, too.

Construction is slated to start in April of 2016.
www.designhaus.com

If something happened with our heartiness, we believe there is a solution to any maladies in a preparation. What medicines do patients purchase online? Viagra which is used to treat impotency and other states connected to erectile disfunction. Learn more about “sildenafil“. What people talk about “viagra stories“? The most vital aspect you must look for is “sildenafil citrate“. Such problems commonly signal other problems: low libido or erectile dysfunction can be the symptom a strong soundness problem such as core trouble. Causes of sexual dysfunction include injury to the penis. Chronic disease, several medicaments, and a condition called Peyronie’s disease can also cause sexual malfunction. Even though this medicine is not for use in women, it is not known whether this treatment passes into breast milk.