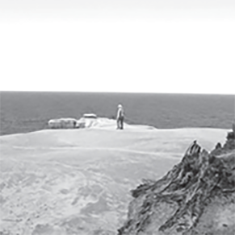 THE OJIBWAY MUSEUM IN ST. IGNACE IS SMALL AND INTIMATE and worth a stop for its gift shop alone. It was there that I discovered books by Canadian First Nations writer Richard Wagamese.
A novelist and essayist, Wagamese produced two wise books of essays, now part of my daily morning read. In “Wolf Tracks,” in One Story, One Song he wrote about hiking: “The land felt alive. When I was out there standing on it, I felt alive, too. . . .[But] We can’t experience a primordial thrill with each breath.” And we don’t. And yet…

ONE OF THE BEST PLACES TO HIKE IN MICHIGAN is Ludington State Park. It’s hilly and beautiful, with a long stretch of Lake Michigan beach and inland lakes ringed by classic stands of white pine. Most of the dunes there are stabilized by forest. They are steep in places. And a long hike there has ups and downs in more ways than altitude. If the day is icy and windy, just being there seems nuts. But it was there that I first noticed that such experiences aren’t sum totals of good and bad moments. They add up to more than mere pleasure or its lack.

Recently, Phil was forced to engage in a couple of my bucket list items (I hate that phrase, but there you are), as I was feeling that 30 years was too long to keep putting off backpacking Pictured Rocks, and at 62 was guessing that waiting longer might not make it any easier.

The shuttle ride of an hour and a half required four days’ walking back. I may have panicked about what we assumed was do-able do in four days is usually tackled in five if Noah’s flood hadn’t been pouring since we left the motel. Weather is distracting. 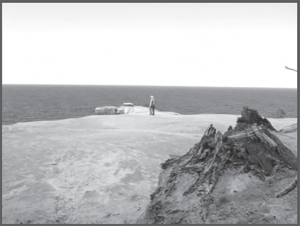 We hiked in the deluge for three hours. Then ,as we finally hit the Lake Superior shore, the rain stopped and sunbeams appeared. Angels might have burst into chorus, the change was so welcome and dramatic.
The next three days were a mixture of sore feet, breathtaking views, pounding surf, aching shoulders, hips, knees, bear tracks, and open pit toilets that were great equalizers. When you’re the only older woman in four days of encounters with the young and fit, anything that’s a reminder we’re all human is welcome.

BUT NO MATTER THE PARTICULARS, NOTHING COULD IMPACT the marvelous experience, not a last afternoon spent wading and sliding through mud, not some of our bad packing choices; even the mostly-terrific daytime weather and some of the world’s best scenery seemed less than the total. It was all so good that two weeks later we decided we needed another adventure. We packed bikes and panniers and headed to Otsego State Park, and hit the North Central State Trail, a rail trail extending from Waters to Cheboygan.

We planned to bike what Michigan Trails magazine told us was 53 miles (it was actually 60), and this was a vastly different experience than the backpacking was. In the first place, all that walking didn’t get us in the right kind of shape for cycling, although our legs were strong. The hardest part about long-distance cycling (in our late 40s, we biked across the UP, and another year, home from the Mackinac Bridge) ends up being the hours on the bike; hands, wrists, and shoulders getting progressively numb or painful.

It was cold, and of course both days had headwinds, even though we headed north one day and south the next. 60 miles is too far on crushed limestone, which seems to reduce average speed by about two mph. Did I mention it was really cold? We left Cheboygan bundled for the upper 30s at about 9:00 A.M. At 7:00 P.M., we were finally back at Otsego. Did I mention that railtrails are boring? There’s a bend in the flat, straight trail far ahead, and you look forward to its novelty. When you finally round it, you see more flat, straight trail. Rail trails often parallel highways, and at one point I switched to it just for some hills and curves. Phil stuck with the trail for a couple of miles, but joined me after seeing how much faster I could go on the paved surface, even with climbs.

But the takeaway from those tough two days of cycling ended up the same as the backpacking: the experience was worthwhile, greatly so, and we’re eager for more. Just this morning I read a William James quote: “What our human emotions seem to require is the sight of struggle going on… .Sweat and effort, human nature strained to its uttermost…then turning its back on success to pursue another [challenge] more rare and arduous still — this is the sort of thing the presence of which inspires us.”

Wagamese wrote that we can’t experience primordial thrills with each breath. But he also wrote that we should still strive for those thrills, “…that charge in the belly that says we are not alone and the earth is not ours to order.” Why treks reveal that charge is part of the mystery that makes them worthwhile.

Rebecca Hammond lives in Ferndale and believes in new beginnings. Wave when you see her walking to and from the library with Phil.