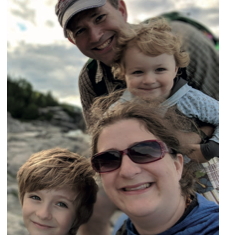 STACEY JAMISON TOOK AN INTEREST IN MUSIC AT A YOUNG AGE. “I BEGAN PLAYING MUSIC WHEN I WAS EIGHT. My mom had bought recorders and a book for us to learn to play together. I took to it immediately, and apparently took off learning without her,” Jamison said.

She joined the band at her elementary school in Williamsport, PA playing the flute. “I had the privilege of growing up in a church community where I was able to play my flute all the time and really be
comfortable with performing,” she said.

“As I got older I started to learn other instruments, including the saxophone and bassoon, which ultimately became my primary instrument.”

By the time Jamison was in high school, she was regularly playing professional theater gigs and subbing in the local symphony. She remembered, “It became quite clear that music was my path. I was especially inspired by one of my bassoon teachers, who eventually became my husband.” Her husband happens to be he local legend, Elon Jamison, Director of Bands at Ferndale High School.

In college, Jamison studied music education and bassoon performance, eventually acquiring a Master of Music degree in bassoon performance. “How’s that for different?” she joked, adding, “I would come home in the summers and teach music to children at my home church. After college I moved to Ferndale to start my life as a professional and be with my future husband. I started teaching music in the public schools right away.”

After a few years in Ferndale, the Jamisons began looking for a Lutheran church family that was both progressive and welcoming. “Zion Lutheran was an obvious choice,” she said. “I had been teaching elementary music for a while, so when a position opened at Zion I jumped at the chance. I knew I had a gift to connect with children, and I wanted to show children that they could love being in church and love God through the greatest gift I have, music.”

TODAY, JAMISON LEADS A WEEKLY REHEARSAL WITH THE KIDS’ CHOIR and every year they put on a Christmas musical where the kids try out various speaking and singing roles. “It’s a safe and loving environment for these kids, and that’s why I’m so passionate about it,” Jamison said.

She is also a freelance musician, playing the bassoon in a symphony as well as pit orchestras on woodwind instruments, and has been working with Ferndale’s marching band for seventeen years.

“My official job is to work with kids musically and on the field to get them to be the best performers that they can be,” she explained. “One of the reasons I really love this job is the kids themselves. There are also those crossover kids that I’ve had since they were really little at Zion, and I love watching them grow up into young adults. I feel a special responsibility to keep an eye out for them.”

Jamison added, “Being with the marching band is so much more than a side job. For me and our family, it’s a big part of our lives and really defines who we are. The adults and students are together for hundreds of hours throughout the season, and we all get very close.”

Winning one of Ferndale’s 2018 Good Neighbor awards was a surprise. “I look at all of the people around me who do so much for others, and I never considered myself to be among their ranks. When I thought about it more, I realized that what people have seen is my passion and devotion, to the children interested, in my spiritual, musical, and emotional care,” Jamison said. “I am honored that people think I have been successful in this mission, and it makes me be even more passionate. I have been considering delving into youth ministry, and this to me is confirmation that I’m going in the right direction.”

The Jamisons have two boys, one in second grade at Ferndale Lower Elementary, and one preschooler at Drayton Co-op Preschool. “I served on the board for the preschool for the four years my older son was there. We are very passionate about school districts being local and growing together as a community. We are very passionate about raising our children in a community that is welcoming, progressive, loving, accepting, and feels like family,” she said.