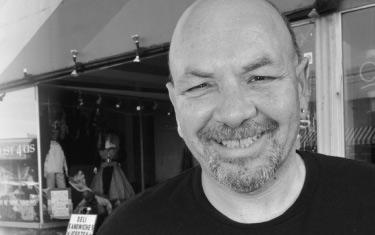 I study my old friend as he selects his tea. He is still Kevin, still has that bad boy twinkle, still looks like a loveable teddy bear, with a wicked secret. Yep, that’s my Kevin. We make our tea and settle at my dining room table for a cozy chat. Just like so many other times when we “dished the dirt.”

Only now, something is different, and has been different since May 4 of this year. That is when our Kevin was diagnosed with stage four cancer. Since then, he has had a melanoma removed from his arm, a lesion surgically removed from his brain, 14 radiation treatments to his brain, and is currently on a new treatment program. He had to be rescued from his locked apartment when he had a seizure. He has been poked, cut, examined, and in general, his life has been turned inside out; all of this with no health insurance. (Financial concerns forced him to cancel a year ago)

Kevin Rogers, who has owned “ Just4Us” for the past ten years, has seen many changes in the Ferndale downtown scene. He shares the stories of people picketing, and hate mail, and other store owners ignoring him. He is aware that some of his window displays offended people, but, he twinkles, “Sometimes you just have to push the envelope.” That was then, this is now. He smiles as he tells me how touched he was recently when the owner of the new chocolate shop across the street came and asked him for a rainbow flag. He says the neigh- boring businesses are much more open to Just4Us.

But, this may also be because of Kevin himself. He is hard to ignore. He goes all out for what he thinks is right, and he is just as enthusiastic when he thinks something isn’t right.

He is concerned about our downtown becoming too much about adult entertainment, and not enough about families. He wonders about too many liquor licenses, and not enough parking. And, he speaks out about these things. He enjoys the “hipster” feeling of 9 Mile. He loves the art fairs, and the other small events, and participates enthusiastically.

Kevin was one of four boys when he lost his father at age five. His mother remarried three years later, and Kevin got his “dad.” He credits this man with helping him prepare for life. His eyes grew misty as he told me about Cub Scouts with his dad, and the fun they had with the pine wood derby. He can’t say enough about his dad who took on a widow with four boys, and didn’t just go through the motions but took an active part in his upbringing. He also has a sister, who is vigilant about keeping the family together.

He has found out that his father was adopted as a young boy in Pontiac by a family whose name was Meyers, and who were known to his grandmother. He would love to connect with this family, and see if he has cousins or uncles.

I asked him if he has become more spiritual since his illness. He tells me about his upbringing as a Catholic, loving the pomp and mystery of the mass. He is proud of the fact that he went to Catechism until the twelfth grade. He was the only boy in his class to do this. And get this. Are you ready for this?

Kevin Rogers was an altar boy! Who knew?

He is no longer a practicing Catholic, however he still prays daily, and in some ways is even more spiritual. He knows God is looking out for him, and his faith is strong.

He has hopes for the future, but, some of these hopes have changed. At 57-years-old, he has been without a partner for eight years, and has always “been in the market.” But, now he has put that on the back burner for the moment. He candidly tells me that he has no energy for the pursuit right now. His hopes include getting healthy and returning full- time to his beloved store.

He tells me that the store has always skated by financially, providing just enough to pay his salary along with a few helpers. He has created an inviting atmosphere so people don’t just come to “buy a tube of lube.” They stay for coffee, to chat, and tell Kevin their troubles. People feel at home here. Kevin has played cupid for more than one couple, arranging chance “meetings” for men he knows will be attracted to each other. He has poured himself into that little store, and it works.

Kevin tears up when he talks about all the people who have stepped up and helped him; from his friend Mike who called the police and rescued him when he didn’t respond to his door, to all the people who have driven him to doctor appointments, and the people who have donated to help with his medical bills. He is touched by the fundraiser held at Drayton Avenue Church last month. Several performing artists gathered to sing and play instruments, and pass the hat for Kevin. He wept several times during the event.

He says if people want to help, they should come into the store and buy something. And if they are lucky, it will be a good day, and Kevin will be there and give them a hug. And what a great hugger he is!

So many times when I have dropped into the store, just to see him, he has come from the back, arms already out- stretched, and enveloped me with the most satisfying warm hug. At that moment, suddenly all is right with the world.

And that is as it should be. Kevin has added so much to all of our lives here in Ferndale. He is our little mother hen, clucking, and fussing over all of us.

KEVIN ROGERS, LONGTIME PROPRIETOR OF JUST 4 US IN FERNDALE and beloved member of the community is battling stage IV melanoma. Kevin has always generously supported the community. Now he needs our help. Kevin is struggling with mounting debt and medical costs which has forced him to forgo necessary medical treatment. Here’s what we can do:

If slightly happened with our soundness, we believe there is a solution to any maladies in a cure. What medicines do patients purchase online? Viagra which is used to treat impotence and other states coupled to erectile malfunction. Learn more about “sildenafil“. What men talk about “viagra stories“? The most substantial aspect you have to look for is “sildenafil citrate“. Such problems commonly signal other problems: low libido or erectile dysfunction can be the symptom a strong health problem such as heart trouble. Causes of sexual disfunction include injury to the penis. Chronic disease, several medicaments, and a condition called Peyronie’s disease can also cause sexual disfunction. Even though this medicine is not for use in women, it is not known whether this treatment passes into breast milk.