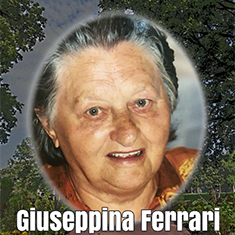 YOU MAY HAVE HELD OPEN A DOOR FOR MAMA and her wheelchair, said a kind word, given her direct care or something in between. We personally thank each of you for standing with Josie and with us. Beside our gratitude for family and friends, we also appreciate the years of support that the Mejishi community has given to us. It has lifted us up and allowed us to be by her side.

When the relatives in Italy found out about Mamma’s decline, they told us to “abbi coraggio,” which means “have courage.” As we sat by her side, Josie taught many lessons to us. May you also find strength and compassion to carry on this legacy of love.

Born in Sora, Italy, on January 30 1827, Guiseppina was the first child of Assunta Petrozzi and Vincenzo Coletta and the eldest of five children – Marietta, Pasuale, Domenica and Bernardino.

As a teenage, World War II shook Italy, and Guiseppina lived in the horror of that conflict. She suffered 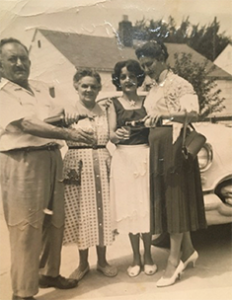 physical and emotional injuries and wore a deep scar on her body from a piece of shrapnel. She sustained injury during a bombing raid in town, she heroically threw herself over her younger cousin.

At a young age, she became the finest sarta (seamstress) in the area, tailoring wedding dresses. And most importantly she met and courted her future husband, Felice Ferrari. They were a beautiful young couple in love.

Felice Ferrari was the eldest of four brothers who lived in the nearby borough of San Giorgio. Luigi Ferrari, Felice’s father, had fought in the U.S. Army during World War I. As a result of his service, he earned U.S. citizenship. After the death of his mother and father, Felice put to use the American citizenship he inherited from his dad, Luigi. Sponsored by Italian friends, he journeyed to Michigan and sent for his fiancé Giuseppina to join him.

She packed a small single trunk of personal belongings and traveled alone to America by boat. Her memories of that voyage included her roommate being a pregnant woman who unfortunately spent the ten-day voyage seasick.

GUISEPPINA AND FELICE WERE MARRIED IN DETROIT September 29, 1956. At the time, Felice was a bricklayer and Guisepinna worked as a seamstress at the downtown Hudson’s department store doing alterations. They lived in East Detroit (now Eastpointe) where she learned to drive. While working 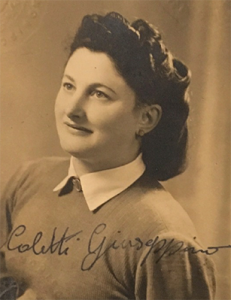 construction, her husband fell three stories down a shaft and was then hit in the head by a piece of falling cinderblock. Josie cared for him for over a year until her recovered.

While waiting in a line of workers seeking employment at the gate of Ford Motor Company,  Giuseppina asked to use the restroom facilities. She was granted admittance because she was pregnant. Once inside, she jumped on a sewing machine and totally impressed them with her skills. She was hired on the spot. She opened the door to Ford Motor Company for the entire family. First Felice, then his three brothers, a nephew and her son all worked at Ford.

The young Ferrari family grew to include two children: Gabriele Louis and Maria Susan (Su). Josie suffered the loss of two other children – Loretta, who was stillborn and a miscarriage. 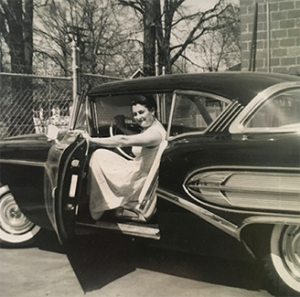 During this period, the couple worked opposite shifts at the Ford Utica Trim Plant. In front of the guard shack, the children would sit in the family car waiting for the parent finishing their work shift to come out and change places with the driving parent. Because the Ferraris had an acre garden at home in Romeo, they sold vegetables to the Ford workers during the shift change.

After many years working in the sewing department, Giuseppina had to be hospitalized and almost died from a lung infection caused by the toxic fibers in the air of that industrial facility. Due to her lung injuries, she was medically retired. Her husband continued working at the factory and finally retired after a heart attack.

WITH THEIR CHILDREN, GABRIELE AND SU GROWN UP, the couple moved to Beverly Hills, Florida, where they lived for many years. Felice’s brothers, as well as Josie’s brother Pasquale, purchased property nearby to one day move to Florida to be all together again. Most of Su’s vacations were devoted to seeing her family in Florida.

When her son Gabriele got sick, she compassionately cared for him at their home until his death in 1993. It was heartbreaking. Jo began showing signs of dementia in the late 1990s. Then, her husband Felice died in 1999. Her daughter Su began her loving stewardship of Josie’s care at that time and shortly after that Josie returned to Michigan to live with Su in Romeo.

Mamma like to go! When she lived in Florida, she traveled all over. Once back in Michigan, Josie enjoyed biking in the Metro Parks and hiking. Accompanied by Su’s cat Pogolito, they made tours of the scenic western U.S.

In 2006, Josie gained a daughter-in-law, Jaye Spiro (of Mejishi). Mamma and Su moved from Romeo to 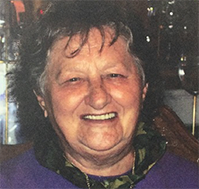 Ferndale. It was a walkable downtown like Sora. The three lovingly walked arm-in-arm and later she journeyed by wheelchair all over the neighborhood. They enjoyed meals together, singing, ice cream, and chocolate in countless places and so many shared settings. Mamma liked to go! She wanted to go wherever they went, and they took her!

With Jaye and Su, Giuseppina continued her travels. She attended NWMAF conferences, martial arts training camps, Buddhist retreats. The three of them visited Italy and Canada, traveled extensively in Michigan and saw many U.S. states.

They traveled many times to Madison, Wisconsin to visit Jaye’s family – brother Steve Spiro, wife Susan, niece Jaala and her husband Mike Callahan, and their children Corrina and Steve (Aden), nephew Jacob Spiro and his wife Krista and their children Skylar (Zoe) and Kai.

Josie became a regular at Mejishi Martial Arts where Jaye is the director. The school is located two blocks from their home. She came to the studio many days a week and there she was loved and cared for by curious children and compassionate adults as they achieved martial arts success and learned self-defense. 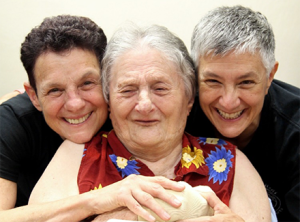 JOSIE’S LIFE JOURNEY CAME TO A CLOSE 0N AUGUST 27TH, 2021 IN FERNDALE MICHIGAN, surrounded by Su and Jaye’s loving embrace. She will be laid to rest in Beverly Hills Florida alongside her beloved husband and son. Forever at eternal rest. She remains in our hearts and center in our memories, a courageous woman who lived a good life in service to her family and those around her. Rest In Peace. We loved you very much!

Our donation wish is that you invest time with your family or friends or someone who is in need of your loving kindness. Put the money in a jar on your counter and decide where to go to expand your connection with others. That would make Mamma’s wish continue for generations to come.

Spend the time.
Create the memories and share them with us.