INSTANT RUNOFF VOTING – WHAT IS IT? THIS IS AN IMPORTANT QUESTION, considering that Ferndale voters may be using the system to elect our mayor and council as early as this November.

Instant Runoff Voting (IRV), or Ranked Choice Voting (RCV) as it is also known, is an alternative voting method aimed at solving common problems with traditional voting methods by allowing voters to rank their choice for candidates, first to last choice. If no candidate receives a majority of first-round votes, the last place candidate is eliminated and the second choices from those ballots are added to the totals for the remaining candidates. The process continues until a majority candidate is ultimately identified.
IRV has been used in Ireland and Australia for quite some time in their national elections, and it has been adopted in parts of Europe. In the United States, about ten cities including San Francisco and Oakland California and Minneapolis, Minnesota use the system, and now the State of Maine is expected to be the first to use it statewide after voters approved it at the polls last November.

Here at home, in 2004 the voters of Ferndale overwhelmingly passed Proposal B with 69.75% of the vote, “to provide for election of the mayor and city council through the use of an Instant Runoff Voting (IRV) system pending the availability and purchase of compatible software and approval of the equipment by the Ferndale Election Commission.” (Full disclosure: Ferndale Friends publisher Stephanie Loveless was part of the organizing team to put IRV on the Ferndale ballot that year.)

Since that time – nothing. The only voting machines the State of Michigan has been willing to certify have been incapable of the simple calculations necessary for this kind of voting, and equipment manufacturers like Diebold have demanded outrageous fees to upgrade for IRV-capability.

Finally – 13 years later – there may finally be light at the end of the tunnel. New voting machines coming to Ferndale this November will reportedly be IRV-capable.

HOWEVER, NOW THAT THE TECHNICAL ISSUES seem to be resolved, there may be new wrinkles at the state and county level. The State Bureau of Elections has now questioned whether or not IRV is allowed under current Michigan election law, despite the fact that the City of Ann Arbor used IRV for at least one election in the ‘70s. There are also new questions about State certification.

Because of these concerns, Ferndale City Clerk Marne McGrath issued a statement on May 1 saying, “In light of this [and other factors], implementation before the 2017 filing deadline may be difficult. It may be more likely it would take place in 2019 if the above items are addressed legislatively and by the BOE.”

To many, the IRV process is much more fair and efficient than traditional voting, but it has yet to gain mainstream traction in much of the United States. “Runoffs are good and sensible. Instant runoffs are just a 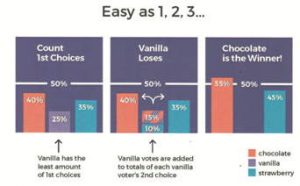 much more efficient way of doing the same thing,” says Howard Ditkoff of SystemsThinker.com, also an organizer of the 2004 Ferndale referendum. “In the current system, voters are going into the vote, playing a game essentially. And there’s been a historically low turnout,” he explains, because those supporting third-party candidates simply don’t see the point in wasting their time casting a vote. With IRV, all have an equal chance to benefit, including those supporting independent parties who actually have a chance to be heard.

“Any time there are three or more candidates on the ballot, there is always a danger of the candidate opposed by most of the voters winning,” Ethan Fitzgerald of the FairVote organization says.

“One, you’re not dealing with the spoiler effect of traditional voting, and there is no pressure for candidates to drop out. Another great thing we’re witnessing is an increase in campaign civility. There is a need to retain support from the other parties, so there’s more cross-support.” In other words, candidates are motivated to endorse each other because they need the support of their opponents and they tend to focus their campaign dollars on what really matters – the issues – rather than spending time attacking each other. “In runoff elections, there is a savings in campaign spending for candidates, too,” Ethan says.

Ethan explains IRV using a metaphor many can appreciate – ice cream: “We like to tell voters, Ranked Choice 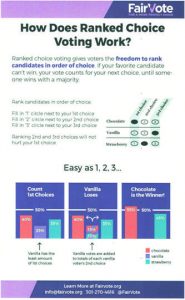 Voting is as easy as 1, 2, 3. It’s having to make a decision between options. Anyone who has asked for chocolate ice cream at a parlor and was told they were out so they had to settle for strawberry instead would understand,” he says. “Voters get to rank according to preference. If their candidate is eliminated, they still get their next choice.”

Howard reflects that “people are pretty familiar with runoff elections and understand why they’re needed.” He uses the recent election in France as an example; “In France’s recent presidential election, nobody got a majority in the first round. They didn’t just take the person with the most votes and make them president. No, they took the top two – Macron and Le Pen – and held a second runoff election between them. Why?Because they recognize that if you don’t do that, you may end up with a leader without majority support, which is not a good outcome.”

“Ferndale could really set a great example for other cities, and I hope it gets a chance to do that,” said Ditkoff.

“The new election equipment is capable of implementing the software but we must wait until the State of Michigan certifies the equipment for IRV,” explains Marne McGrath of the City of Ferndale. “Most likely we will not be using IRV in the November 2017 election,” although there is hope it’ll be up and running by then.
When asked if IRV will realistically be available to residents in the near future, Ethan responded, “We hope so. The equipment purchased is certainly capable of allowing for ranked choice. We’re just waiting on state certification.”

In early May, McGrath requested a legal opinion from City of Ferndale attorney Dan Christ about the way forward. On May 29th, she reported that she has a follow-up email into Christ and hopes to receive a response in a week or two. At that point, she plans to re-engage with the county and state, depending on the advice given by Christ.

In the meantime, voters can educate themselves by referencing FairVote.org. “There are a lot of printable materials here,” Ethan explains, or by visiting http://www.firv.org.