Great Lakes Funding: Funding for Great Lakes restoration may be completely cut. While I feel that our Lakes are magnificent and worth cleaning up for their own sake, there is also nonetheless a massive financial benefit to having clean lakes, and the waterways that feed them. Our tourism industry is close to being entirely based upon our water. And, although I don’t hunt or fish myself, I believe that anyone who does should be able to eat what they catch with no fears of toxicity.

It’s odd that the very success of the Clean Water Act and the EPA has convinced people that not only are they unnecessary, they never were necessary. The whole point of relaxing regulations is to legalize practices that were halted only through legislative mandate. While it’s sad to realize that there are CEOs who seem willing to increase their pollution again as soon as possible, it’s just as sad that apparently there are many who believe it won’t matter. Think back to a time, decades ago, of a drive through SW Detroit when the industrial stench was at its worst. Now imagine it even stronger. Regulations make it as mild as it is now.

The popular push-back against these moves is enormous, like nothing I’ve seen in decades. While stalwarts like the Sierra Club have never gone off-duty (and we’ve taken them for granted), new grassroots efforts are popping up like, well, grass from roots. Charlevoix resident Kimberly Simon started a movement called “All Hands on Deck” to get people personally involved in local events and fight to keep funding in place for Great Lakes restoration. Kimberly told me, “The cuts are a nail in the coffin for the Great Lakes ecosystem on land and water and for the Great Lakes regional economy and lifestyle. Great Lakes issues are not political. The Great Lakes environmental concerns cross state, party, and national lines. I hope to show that in a time when we are divided in this nation about almost everything, water is something we can agree on.” The group’s first events will be July 3 at 10:00 A.M., on beaches all over the region, and their greater purpose includes communication with political leaders, having a website that will be a hub for information and volunteerism, and educating citizens to empower them to not only reach out to candidates, but to change everyday habits to keep our Lakes healthier.

Botanist Kate Chapel took this to heart and is organizing a downriver event. “I learned about ‘All Hands On Deck’ through Facebook and immediately started to get involved. I am a provisional interpreter at the Lake Erie Metropark, so protecting this resource is very important to me. Lake Erie provides a multitude of ecosystem services including fishing, recreation, and tourism. The wetlands associated with its shore teem with life, and filter out toxins and excess nutrients. It’s truly a remarkable system worthy of our protection and stewardship.” Everyday activism.

Ferndale Michigan Monarch Project: Monarch numbers are down again this winter. I send seed fluff out the car’s passenger window wherever a spot lacks milkweed, monarch’s only host plant. Look for meadowy places, grassy verges, goldenrod and thistles, which like the same kinds of spots. This has made many a dull car trip more interesting and purposeful. A family could break up the monotony kids experience on road trips by giving them each a bag of pods and a win-dow cracked open about an inch. Great opportunity to teach kids about butterflies while let-ting them participate in some everyday activism.

Boots and Beer: We love a Michigan hike followed by a stop at a microbrewery. Last Sunday, we drove to the Maple River State Game Area north of Lansing and walked the dikes. If you’ve driven on US 127, you’ve been right through its center and may have thought, like we did, it was just a flooded area, wild and not walkable. But most of the dikes bordering the man-made lakes are. They were partly-thawed and teeming with 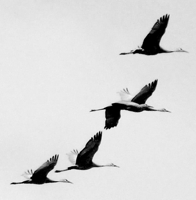 I emailed this to ornithologist Laura Erickson of Duluth. We met years ago on the Ohio turnpike, of all places, because I passed her Prius in mine, in the ‘90s it being a custom for Prius drivers to wave to each other (if you watch Curb Your Enthusiasm, you know this was A Thing, and it used to be an outright snub to not wave back). We ended up at the same rest area, and struck up a friendship.

Laura told me that this must have been a long-mated pair to fly so closely together. “Spring migratory flocks are made up of pairs, their one-or-two young from the previous year, and relatives/neighbors/new associates they meet during stopovers. They’re very sociable. But the primary units of Sandhill Crane society are the mated-for life pairs that hook up during their third to fourth years. The young (usually one chick but some times two) stay with their parents until the parents slip away at some point near their destination during spring migration – the parents to nest again, the young to wander and mix with other young birds and adults whose mates have died over the winter – those adults will meet new adults and the young will wander around in small groups all summer, starting new attachments that, if their bond survives fall migration and winter, will set up new pairs to join the adult pairs the following year.” Ordinary, everyday magnificence.

Becky Hammond is indebted to Gloria Steinem for this headline, sort of. She’s lived in Ferndale since 1986.