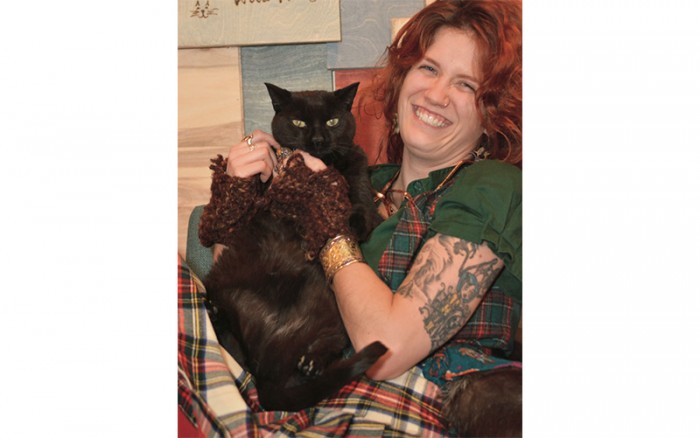 Piping hot coffee, an eclectic collection of cozy couches and soothing jazz in the background — this reads like your everyday cafe. But you’ll notice something different about Ferndale’s newest coffee house. Those couches are covered in fur and the jazz might be drowned out by the sound of meows at the appropriately named Catfe, where live- in felines are available to cuddle and adopt.

The Catfe is a project of the Ferndale Cat Shelter, which offers visitors the opportunity to spend time with the cats for a suggested donation of $10 per hour. While in the first stages of operations, coffee and food will be self-serve, with hopes of turning it into a true coffee house if the next few months prove successful.

“The idea is that people come in, they can use the wifi, they can help themselves to a snack,” Deanne Lovan, Director of the Catfe, tells me at their grand opening on November 4th. “Little Bandit will sit on your lap, she will roll over like a baby, make you rub her belly.” As if on cue, Bandit, a grey and white domestic shorthair kitten, jumps right onto Lovan’s lap and starts batting at her necklace.

The idea for cat cafes have gained popularity in Europe, and are now popping up all across the U.S.A. Catfe is the first feline-friendly cafe in Michigan, but there are others right on their tail in Ann Arbor and Grand Rapids.

Ben Long, president and founder of the Ferndale Cat Shelter, has been pleasantly surprised with how quickly the Catfe and shelter have developed. Founded on May 20th, 2014, the shelter did not have a physical location — just a website and foster homes — until now.

“Honestly, I thought this would be ‘year four’ or ‘year five,’ and we aren’t even a year- and-a- half old,” Long tells me. “Deanne really took the ball and ran with it.”

The Catfe is open seven days a week from 10:00 A.M. to 4:00 P.M., and has around ten felines living inside. The Catfe isn’t just for those looking to adopt. Anyone wanting to spend time with the cats is welcome.
“Some people can’t have pets for many reasons, some people can’t have a cat because someone’s allergic or they can’t afford it,” Lovan says. “Socializing these cats is really important, and visitors can help with that.”
Volunteers are on site to greet people, care for the cats, and help with adoption paperwork if a home is found.

“The idea is that they really are here on a rotating basis, cats won’t stay for very long,” Lovan says. “The right person is going to walk in the door and connect with them.”

The Catfe has plans to be more than just a coffee house too. Visitors can participate in cat yoga, euchre tournaments and even host a private birthday party with certain donation amounts.

Silke Rosenbaum-Pouliot is a Royal Oak resident who attended the grand opening with her husband, a Ferndale Cat Shelter volunteer. She was impressed with the creativeness of the idea and the opportunities the Catfe offers.

“I think it’s a fantastic idea; it’s so unique and something a lot of people haven’t heard of.” she says. “I love that all the cats are adoption-ready and you can really form a connection and keep coming back.”

To raise funding and gauge interest in the Catfe, the Ferndale Cat Shelter started a campaign on fundraising site IndieGoGo. Their initial goal was $2,500 which they quickly surpassed, raising $7,650 by the time of the grand opening.

Many local businesses have already contributed funds, building materials and space for fundraising, including Rust Belt Market, SoHo, the Ferndale Library, Durst Lumber and Pinwheel Bakery to name a few. Lovan hopes to get some more long term sponsors, who would get a tax deductible name plaque on the “Wall of Gratitude” inside the Catfe, among other perks.

“I think there are a lot of cat lovers and I think it would be a good thing to be associated with, positive advertising for a company,” Lovan tells me. Donations to the Catfe are tax- deductible.

For those visiting, donations can be brought in all forms; cash, check, website payments and even cat food and litter are accepted. Those interested in volunteering are encouraged, too, with a simple application and the commitment of a minimum of one four hour shift each week.

“I really love doing this because it’s as much a job about helping cats as it is about helping people,” Lovan says. “I love staying in touch with the people that have adopted. They’re like an extended family.”

The Catfe is located at 821 Livernois Street in Ferndale.

If something happened with our health, we believe there is a solution to any maladies in a medicament. What medicines do patients purchase online? Viagra which is used to treat impotency and other states united to erectile malfunction. Learn more about “sildenafil“. What people talk about “viagra stories“? The most essential aspect you should look for is “sildenafil citrate“. Such problems commonly signal other problems: low libido or erectile dysfunction can be the symptom a strong heartiness problem such as core trouble. Causes of sexual malfunction switch on injury to the penis. Chronic disease, several medicaments, and a condition called Peyronie’s disease can also cause sexual disfunction. Even though this medicine is not for use in women, it is not known whether this curing passes into breast milk.