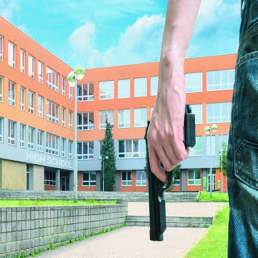 THERE WERE SEVERAL SCHOOL THREATS MADE IN MICHIGAN IN THE WEEKS FOLLOWING THE ATTACK AT MARJORY STONEMAN DOUGLAS HIGH SCHOOL IN PARKLAND, FLORIDA. Nineteen-year-old Nickolas Cruz, who had been expelled from the district, opened fire and ended the lives of seventeen people.

A good many of the threats administrators have witnessed in Michigan’s schools are taking place in and around the Ferndale area, and some feel these issues are more prevalent than ever before.

“I don’t know if they are becoming more prevalent, or we’re just more aware of them,” said Bill Good, Director of School Communications and Pupil Services for the Ferndale School District. “Everyone may just be on pins and needles following the Florida attack, and perhaps we’re more sensitive to them. As a father myself, I know I’m worried.”

Good said Ferndale school officials met with the City’s Chief of Police, Timothy Collins, following the Florida shooting to review current school safety policies in Ferndale specifically and make adjustments where needed. One of the topics regarding the Florida shooting which has gained nationwide attention is the voluntary resignation of school resource officer Deputy Scot Peterson. Peterson was armed and ready at the high school but admitted to failing to take action to prevent Cruz from opening fire. “Our school resource officer and Chief Collins met to discuss what lessons could be learned from the attacks, and to review training procedures and drills,” Good said. “Our resource officer is stationed at the school at all times and is prepared to respond if needed.”

Good was reluctant to talk about specific action items that came out of the meeting with law enforcement due to concerns that sensitive information would be put into the wrong hands. “We don’t want to give anyone thinking of doing something this horrific the playbook. There are a lot of things we do behind the scenes, and we’re asking the community to trust us. I realize that’s asking a lot, but they need to know they can put their trust in us.”

GOOD ACKNOWLEDGED THAT THERE SEEMS to have been a notable uptick in threats following the Marjory Stoneman incident, and he mentioned that a number of area schools received what administrators refer to as “nonspecific anonymous threats” around the same time, including those in Warren, Detroit, Ferndale, and Oak Park, among others. “We recently received such a threat and there were many others in the area that experienced something similar. Unfortunately, we cannot release the details,” he said.

There were a record number of threats in general reported in the state’s schools during the month of February, with a total of 670 reports made – some credible, some not. Law enforcement works closely with the schools to investigate every threat made in order to determine the level of severity and whether to pursue criminal charges against those responsible.

“There is certainly an undercurrent going on,” Good said of concerns regarding gun violence and promoting public awareness. “However, it is my understanding that there tends to be an uptick in threats immediately following a well-publicized incident. Then they subside. It’s pattern-like.”

A number of public forums regarding gun violence and the promotion of school safety have popped up in and around the Metro Detroit area. State representatives, congressional leaders, teachers, law enforcement officials, gun safety activists, parents, and students are all meeting to talk through their concerns at these forums, which are primarily designed to better educate the public.

“It’s all about creating an open dialogue centered around what we’re seeing and what we can do about it,” Good said. “And, it’s important that we get the message out there – if you see something, say something. There are a number of things we’re prepared to do to address potential threats, but we can’t do anything if we don’t know about them.”

Good added of the response the district has received from residents, “We really appreciate the continued support we’ve received from our parents with students in Ferndale schools, and are impressed with the passion the community has shown for ensuring safety and security in our schools.” His mission is to reassure parents and students that Ferndale is taking this very seriously, and that the district has put precautionary measures into place to safeguard against any violence. “We share as much information as we can as quickly as we can, and we are doing everything possible to eliminate threats.”

Any safety concerns in Ferndale schools should be immediately reported to the administrative office at 248.586.8652. Bill Good can be reached directly at 248.586.8672 or bill.good@ferndaleschools.org.